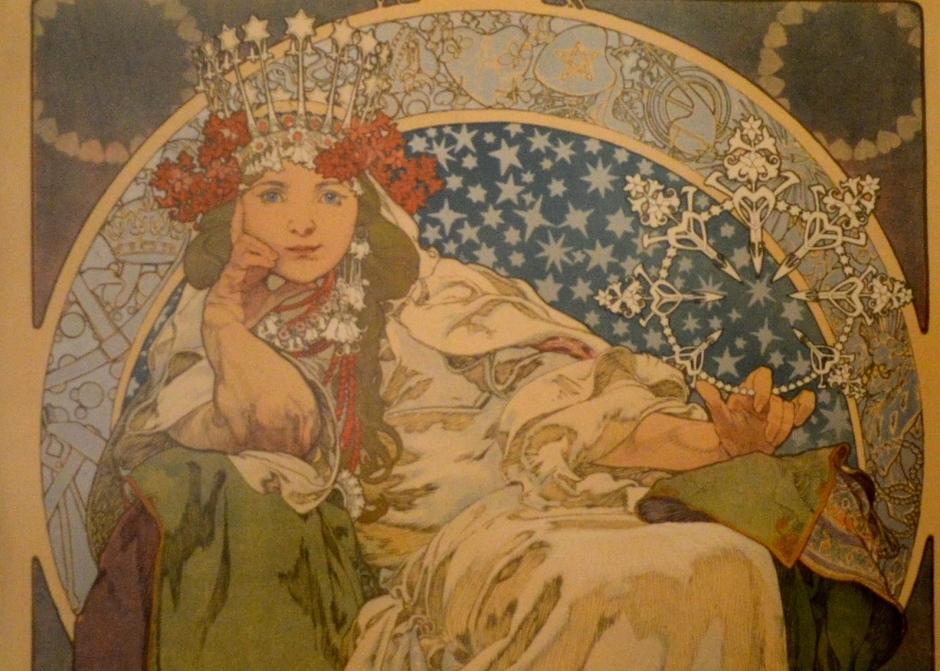 European neighbour countries Austria and Czech Republic have a lot in common, when it comes to culture. Including art. Especially art. Think two 19th-century artists, one from Vienna, the other from Prague. Contemporary, modern, both equally scandalous for their times. Challenging traditions as their ladder to fame. Branded as their home country’s most celebrated artists for posterity. Curiosity piqued yet? Here’s the Art Nouveau’ masters in a face-off…my way. Feel free to take sides.

Vienna is a little less Viennese without mention of this symbolist painter (1862 – 1918), Gustav Klimt. No understatement to say that Klimt’s individualistic, quirky style has, in fact, become synonymous with Austrian art itself. Judge for yourself.

Limelight on Klimt: Vienna’s 18th-century Belvedere Palace houses one of the city’s most impressive state museums and the largest collection of Gustav Klimt’s paintings. There are 24 artworks in all, one more spectacular than the other! Prepare to be dazzled.

Claims to fame: Even if you try, you can’t possibly erase the images of Klimt’s most famous works from your mind’s eye, especially‘The Kiss’, that iconic canvas with an embracing couple dressed in elaborate robes. Or his famous portrait of Viennese art patron and socialite, Adele Bloch-Bauer, stolen by the Nazis and recovered by American art collector in 2006 for $135 million, making it the expensive art ever bought at an auction. That shimmering ‘Woman in Gold’ (called the ‘Viennese Mona Lisa’), the bold and striking antithesis of the demure and modest Da Vinci portrait. 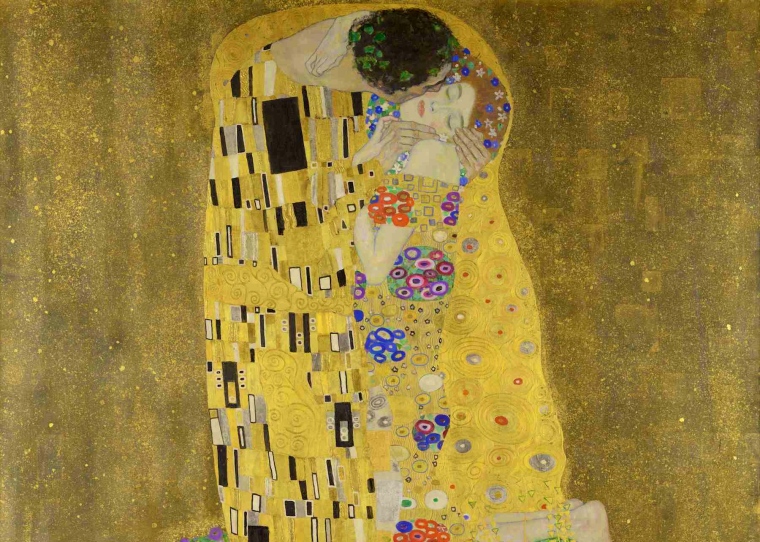 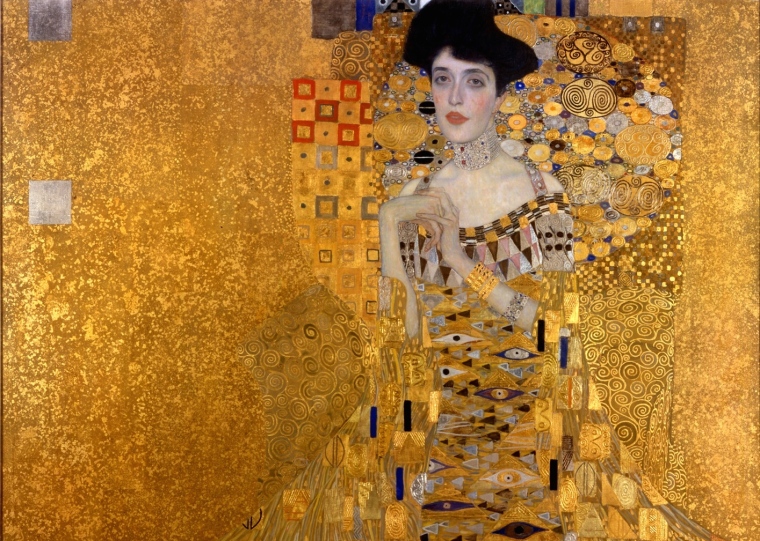 There never was and there never will be another Klimt. His mind-boggling masterpieces literally scream for attention among a million different artworks. Yet, there is a curious subtlety in his bold style that grows on you as you stare at his work, and slowly find yourself drawn into the pigmented depths of his canvas. For me, Klimt’s characteristic genius lies in the ease with which he blends real with abstract. What do you think?

So I took Klimt home: The streets of Vienna overflow with Klimt prints and souvenirs literally overflow everywhere you look. My choice? A solid heavy glass paper weight. Adele smiles at me enigmatically everyday from her spot on the corner table of my living room. A piece of Klimt is mine. For keeps. 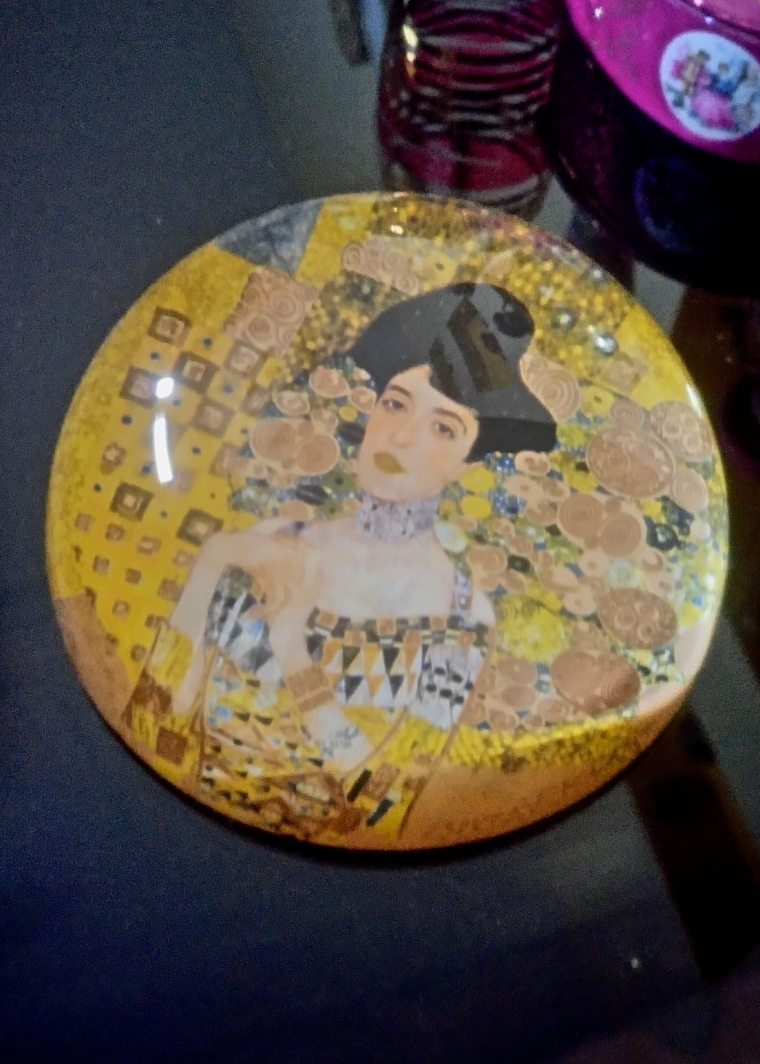 Ironically, Czech artist, Alphonse Mucha, who is called the father of Art Nouveau (1860 – 1939) is said have disagreed with the term, as he believed that that art was eternal, hence labelling it as ‘nouveau’ was unfair. Mucha is credited with creating not just an appealing design style, but a revolution of sorts in the field of art. His work, like him was liberal, unconventional and free. Prague is prettier because of Mucha. (Read my previous post on Art Nouveau in Prague here) 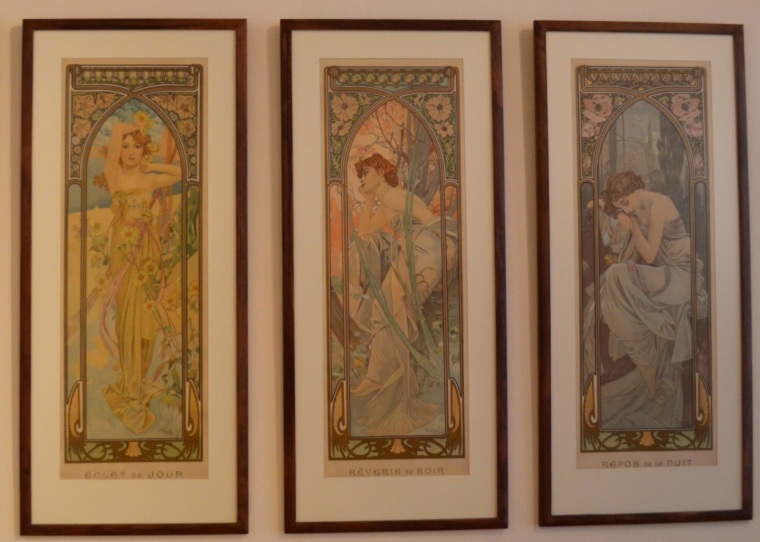 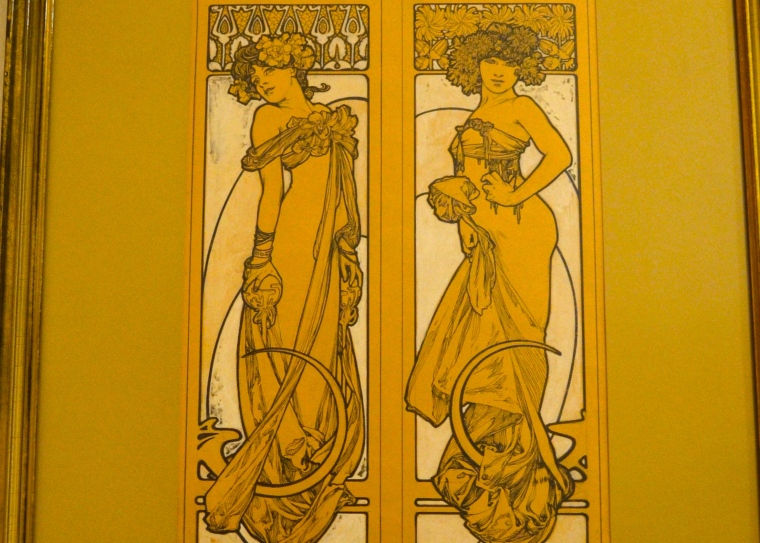 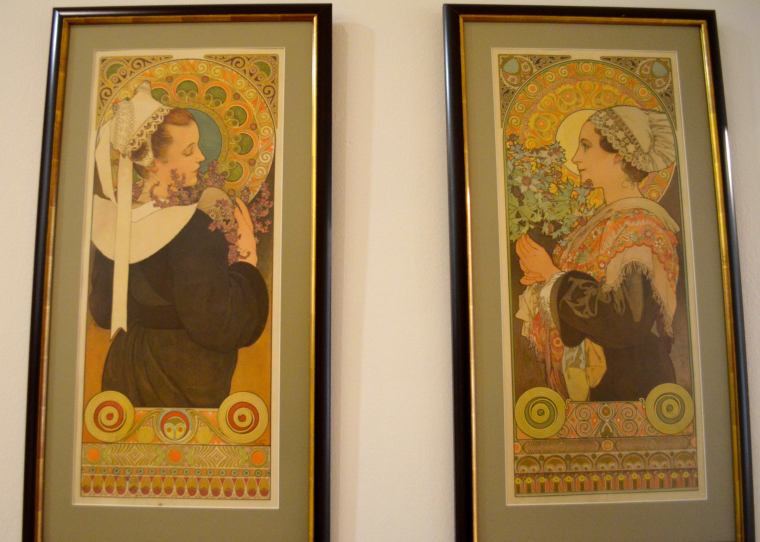 Limelight on Mucha: Mucha Museum is the only gallery dedicated to the works of Mucha in the world is housed in a small building near Wenceslas Square, Prague. Exhibits include paintings, drawings, pastels, sculptures, photographs, sketches and memorabilia of his trademark beautiful women with flowing hair. Each depiction more picture-perfect than the other. Stay engrossed for hours poring over the fine details on every wall. Wide-eyed with wonder, as you try to decipher the moods and emotions of every lady up there…you could swear that one just toss her hair slightly, and did that one just raise an eyebrow? 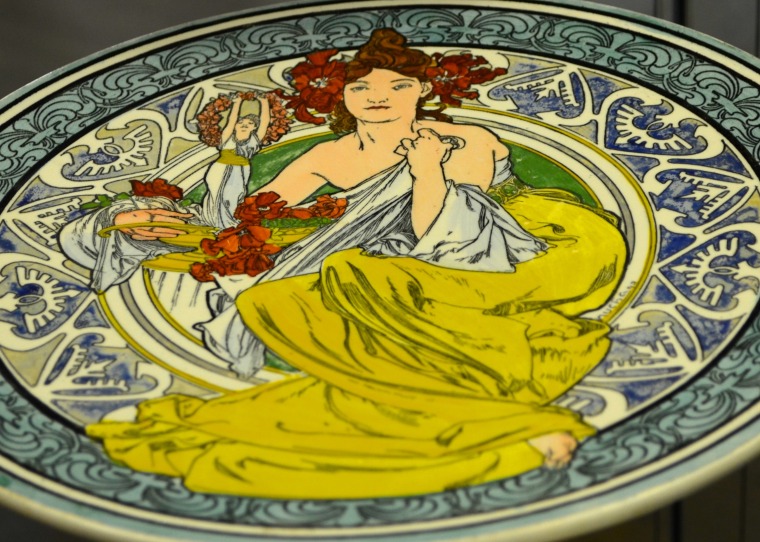 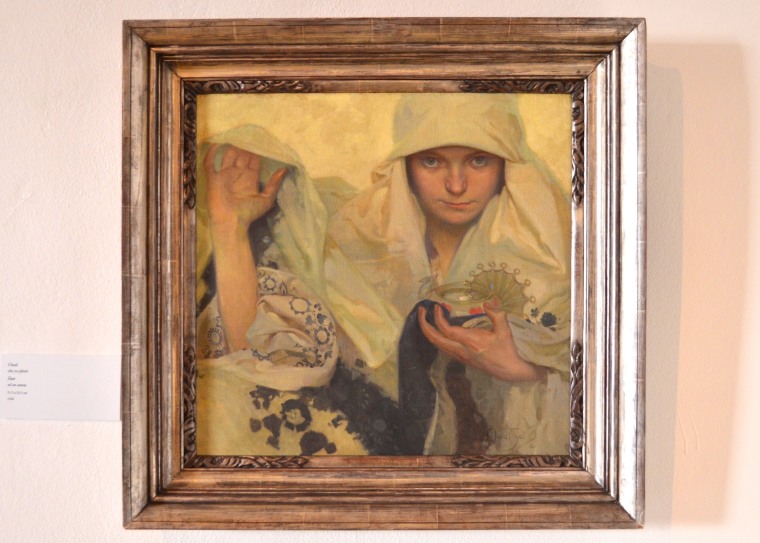 Claims to fame: Mucha created a striking poster as an advertisement for the Job cigarette company. No surprise…the subject was a stunning woman with a lighted cigarette. Ooohh!! Scandalous for the times, since respectable women did not smoke in public. Outrageous because women wore their hair tied up and loose hair was a sign of a seductive temptress, wilful and wild. Mucha dared to be different and he made the grade. His other masterpiece is Seasons (1896), the first of his inspirational decorative panels, showing four seasonal maidens, each against a different backdrop, conveying the mood of each season. 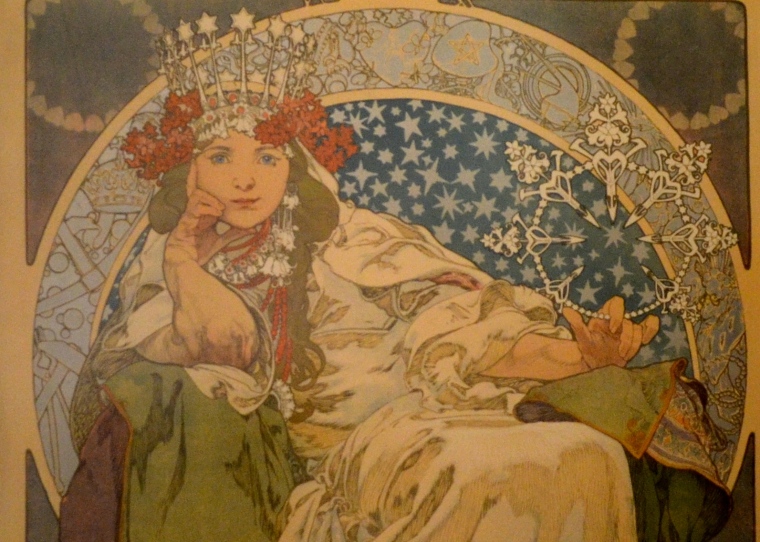 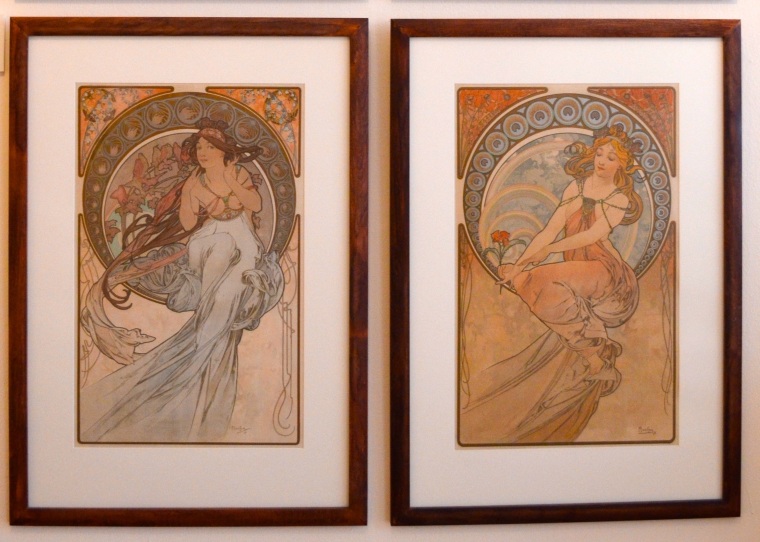 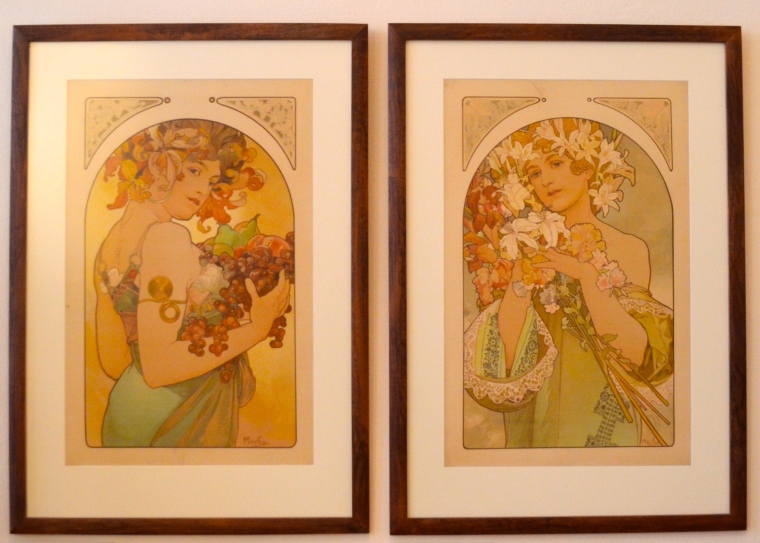 Not so cryptic clues: Mucha is Mucha and you can distinguish him anywhere, once you learn to focus on his genre. Delicate, pale women with long wavy, silky hair, large eyes and seductive forms. Painted in water colors for a vivid, yet soft touch. The figures melting into the background of the canvas, yet standing out distinctly because of a dark ink outline. It is said that Mucha made his models pose against a solid black curtain and added fantasy landscapes later from his imagination.

So I took Mucha home: The museum shop is a treasure trove of Mucha souvenirs. I picked a wooden wall hanging with a sturdy rope string. Mucha’s delicate Slavic lady inspires me every morning when I sip my cup of coffee in my library. 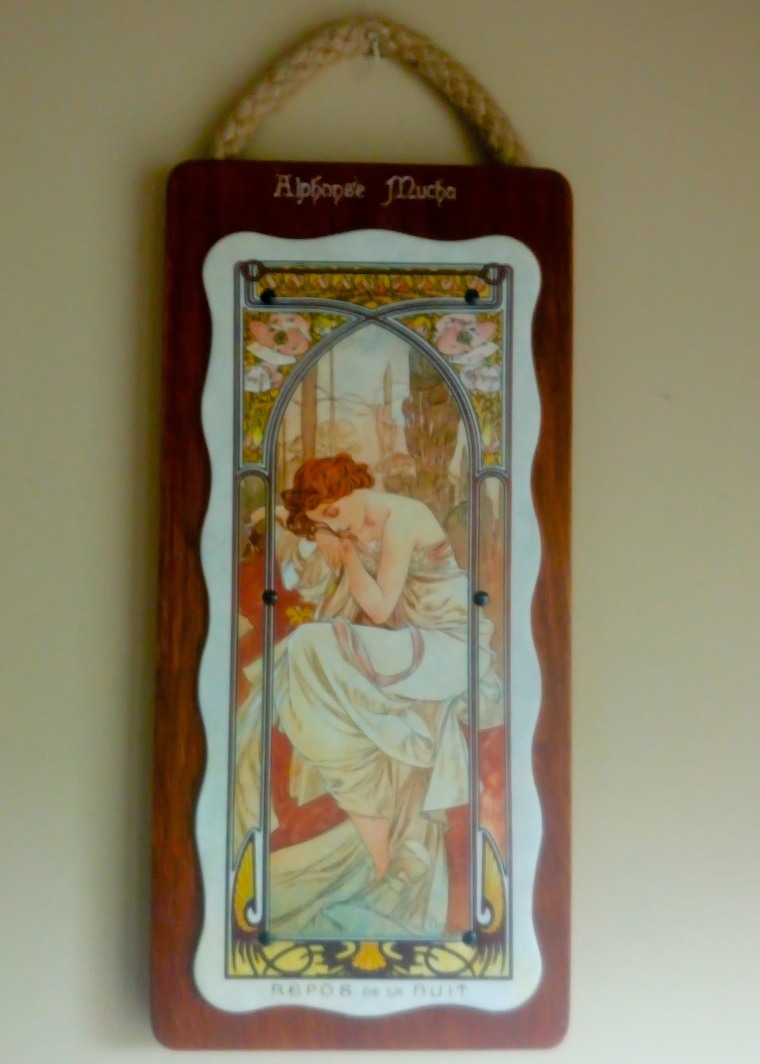 Do you think Klimt and Mucha would have personally known women in such avatars…women who would break the mould, stray off the beaten path, be themselves in a world full of restrictions and stereotypes? And more that that, do you wonder how they would paint women if they returned with a brand new canvas today… 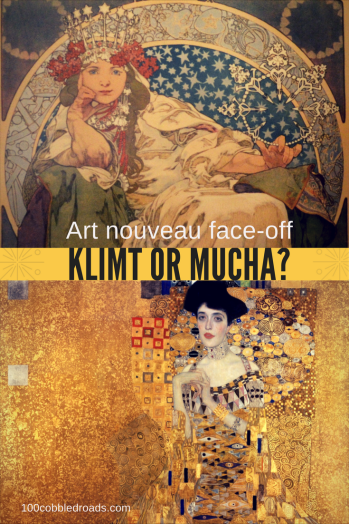 87 thoughts on “Who is the winner in the great Art Nouveau face-off? ”