So what if Austria’s prettiest town is no secret…

We’ve all either squirmed, shivered or scowled when faced with appalling discrepancies between what we expected and what we found at a dream destination. But sometimes, the story is not gory. Sometimes, the reality outshines the dream. This is that story. Of Hallstatt, a 7000-year old alpine village-town hidden between a serene lake and forested mountain peaks. Where less than 1000 residents live the classic Austrian life in their charming wooden abodes with flower-draped balconies. Blemish-free breathtaking beauty. Exaggeration? Even thinking of that word should be a sin here!

So if you’re 2-4 hours away in the vicinity, don’t you dare skip the glorious opportunity of swooning through the unadulterated utopia that is the Austrian countryside. And if you’re based in neighbouring Cesky Krumlov, Czech Republic, like us, pick CK Shuttle for a dependable and divine ride. 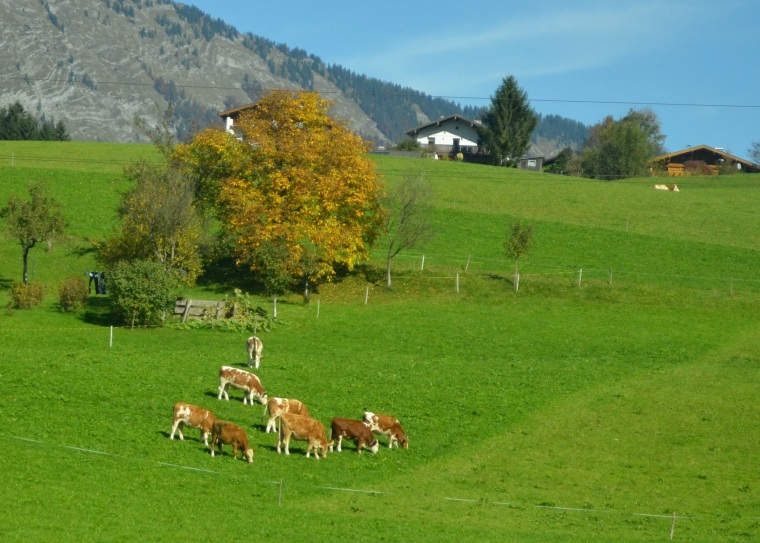 The drop-off at the Central Square Marktplatz is something of a sensory explosion. But even the incessant movement of the crowds can’t mar the beauty of this tiny paradise. Quintessential alpine houses embellish the shores of a fjord-like lake valley carved by glaciers and surrounded by mountain peaks rising from the placid waters. Your mind and eyes curiously devour the scene while your footsteps unwittingly follow the human stream along the only main street on the tiny plot of land sandwiched between the steep mountains and the shoreline.

A photo opportunity at every step of the narrow cobbled streets. A curly haired cherub poised on a pot at an entrance. Pastel colored Baroque buildings adorned with elaborately painted facades. Lovingly preserved timber homes with dark tiled roofs and pretty flower-tub windows. The majestic church steeple of the Lutheran Church peeking through the houses, its grey stone facade making a muted statement against the vivid blue of the clear sky. A lazy wheelbarrow doubling up as a herb planter. A ruby red rose trellis brightening up a peach wall. Little back alleys leading to hidden treasures. 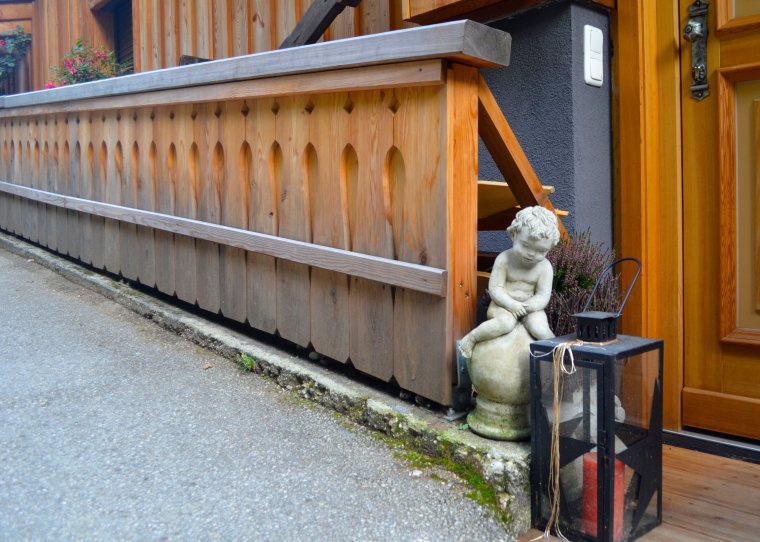 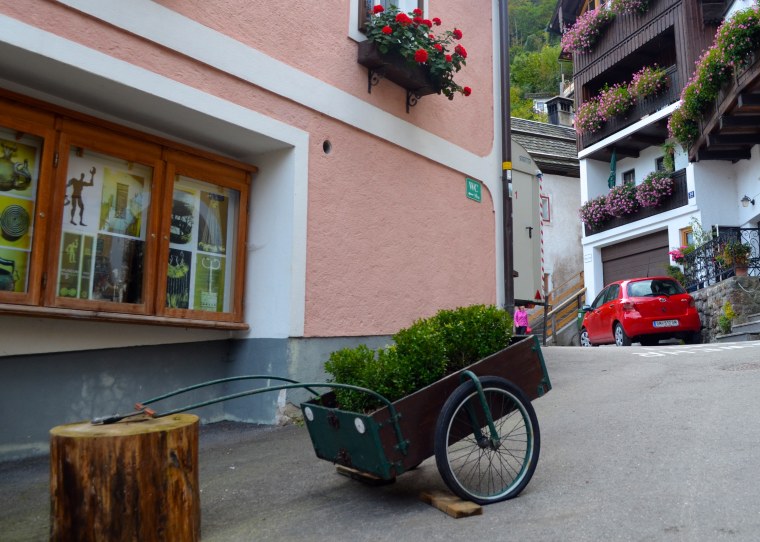 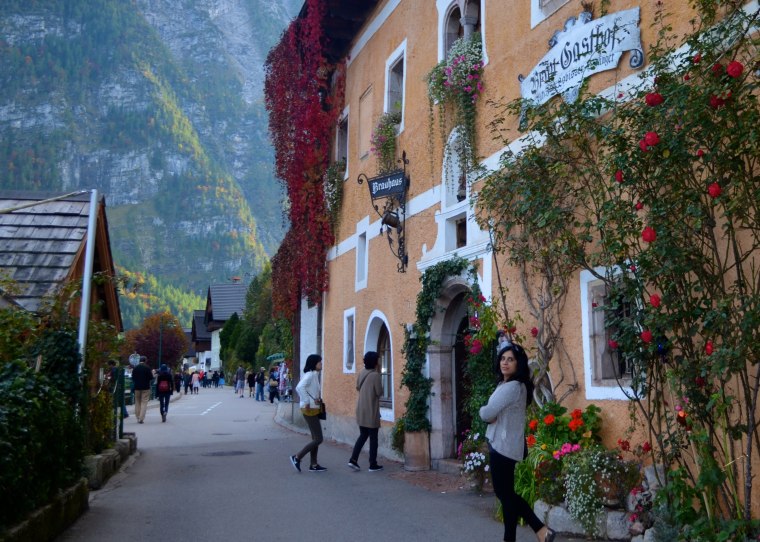 A flight of rough stone steps pull you magnetically towards the 800-year old cemetery next to the Catholic Parish of the Assumption Church at a higher level of the town. Wander among the graves adorned with colourful flower beds and unusual birdhouse-shaped tombstones. Wonderful views too. Apparently, the graves are re-occupied after 10 years and the remains of the previous occupant are moved to the ‘Bone House’ in the nearby St. Michael’s Chapel as part of a second funeral. Decorative inscriptions label over 1200 skulls stored here….possibly the largest collection of skulls you may have encountered. 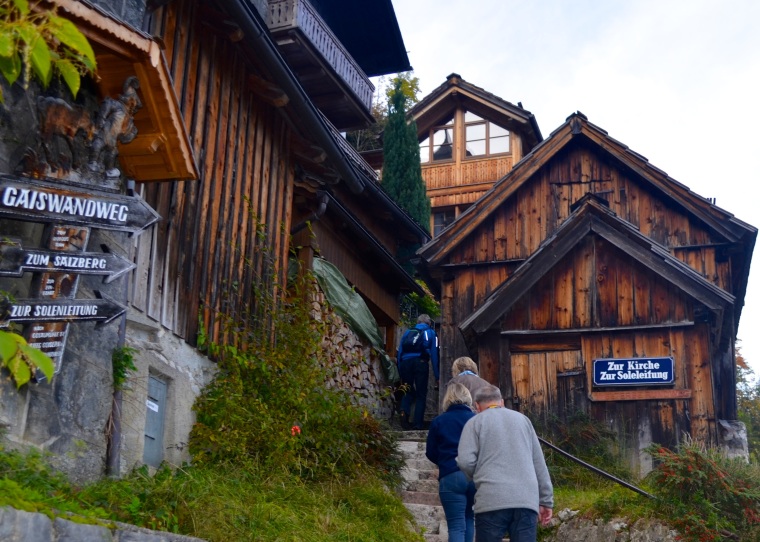 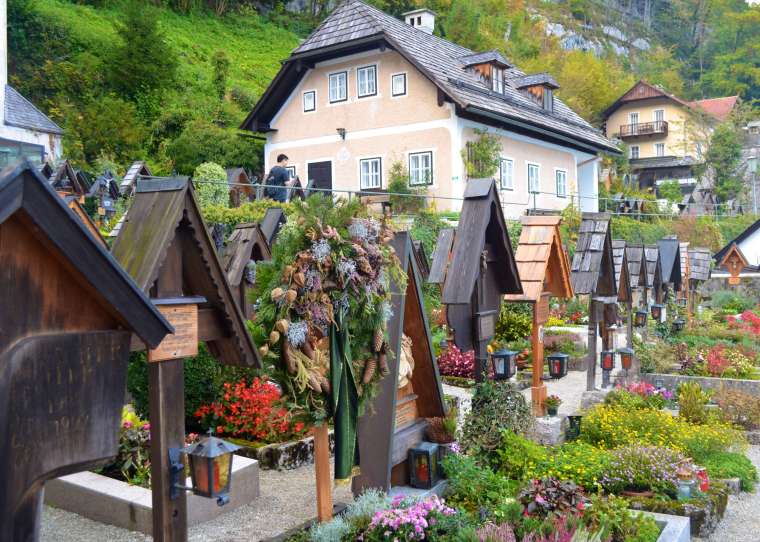 Surprise! Hallstatt is no longer Austria’s best kept secret. Roughly 600,000 people visit each year. Restaurants are limited and the queues are unbelievable, even at little takeaway stalls, but you will grab a bite somewhere if you have the persistence and the intention. But don’t the touristy element bother you. Fresh grilled fish, authentic apple strudel plus gorgeous views from a lakeside café equals triple whammy! The food is not free, but the visual therapy is. Learn to look through the people. Focus. Immerse.

Stop by the local shops selling salt products and take back a pinch of rich salt history of this UNESCO World Heritage site, which dates back thousands of years. Reflect on the name (Hall=salt, Statt=place) of the oldest still-inhabited village in all of Europe, which even has a period in history named after it (the Hallstatt period lasted from 800-400 BC). If you have a couple of hours in hand, exploring the salt mines is a worthwhile option. If not, indulge with eye-candy.

The best way to experience the alluring of this alpine village? Escape the hustle-bustle. Choose from 40 different hiking trails of the spectacular Salzkammergut Lake District. Gloat at the world heritage views from the incredible viewing platform of the Hallstatt Skywalk. 12 meters (39 feet) away from the mountainside and 360 meters (1,181 feet) over the town, and pretend to be a drone.

Or follow my league and opt for a boat cruise. Once you start to skim lightly over the tranquil surface of the lake, the townscape slips into the distance and you know why Hallstatt is Hallstatt. Inspite of the crowds. Despite the crowds. The lake is the star here. With its quiet grace, it defines the persona of the entire valley. You wonder how it would appear under the shroud of thick fog or blurred by the ripples of rain on a grey evening. But today, the heavens are smiling down on you, so rejoice with the riot of colors. Brilliant blue sky, emerald waters and gold-ochre-rust speckled hills that seem to rise from the lake. Surrounded by the shadows cast by Salzberg, Mount Plassen and Dachstein, the second largest mountain of Austria, you drift along…tracing the reflections mirrored over the the glassy waters and feeling the crisp mountain air seep into your lungs. An eternal moment in time. Pure as Hallstatt. 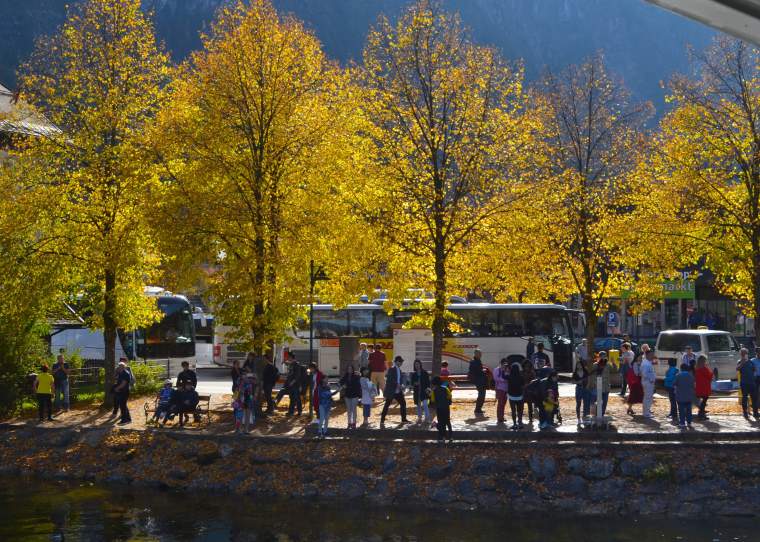 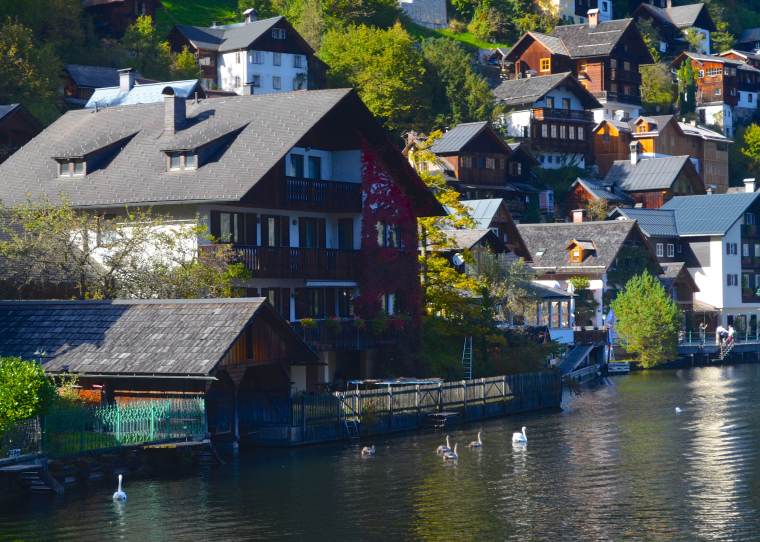 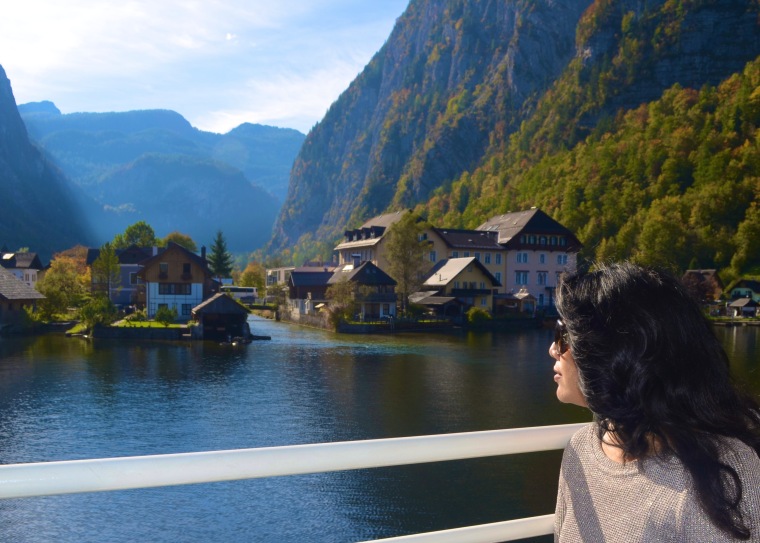 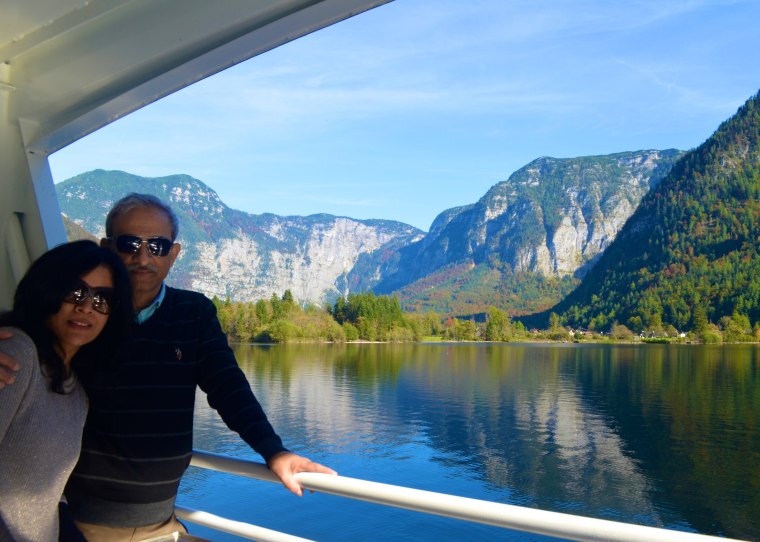 Old-fashioned, flat bottomed fishing boats glide. A couple of swans make ripples.  Boat houses stand on sturdy pilings. Children play on grassy lawns and parents take lazy strolls outside their blissful lakeside homes. The iconic Castle Grub, a 74-acre property built during the Middle Ages and renovated in the 19th century by an ambassador to the Russian Czar appears to float. It would make an apt location for a Agatha Christie murder mystery. Soundless, except for the soft whirr of the boat and the clicking of the cameras. Nothing can disturb the peace. Life is beautiful. This planet is beautiful. Or have you died and gone to heaven? 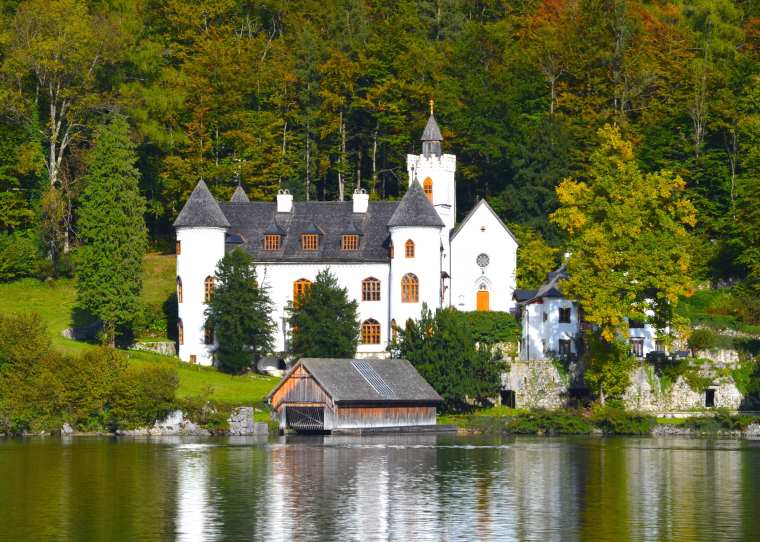 Back on the shore, loiter as long as you can before you hit reality again. Because a few hours are not enough for this pretty piece of paradise. Venture into undiscovered corners. Slip in and out of quaint streets. Gaze at the lake from different angles. Again. And again till you feel the image is burnt onto your brain forever. The swarm of day trippers thins away slowly. So, as you wait for your shuttle, set your sights on the silhouette of the adorable town dominated by the church spire. Watch unblinkingly as it changes complexion with the falling dusk and the twinkling lights dancing over the lake grow brighter by the minute. 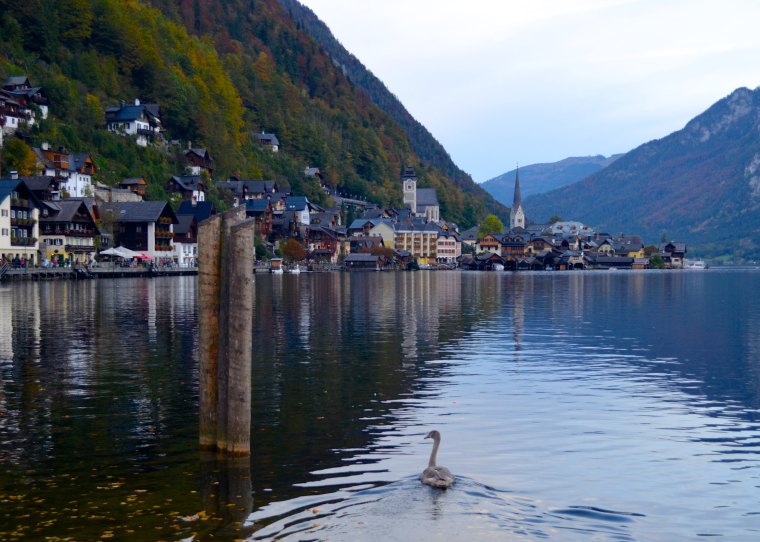 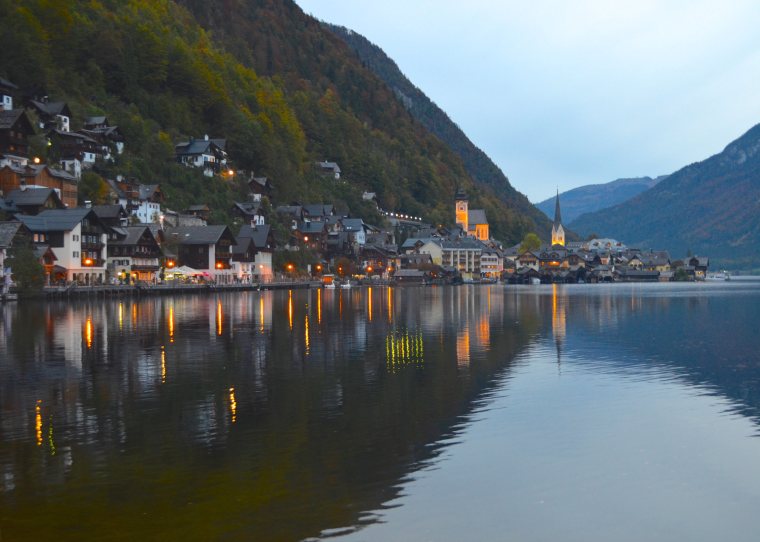 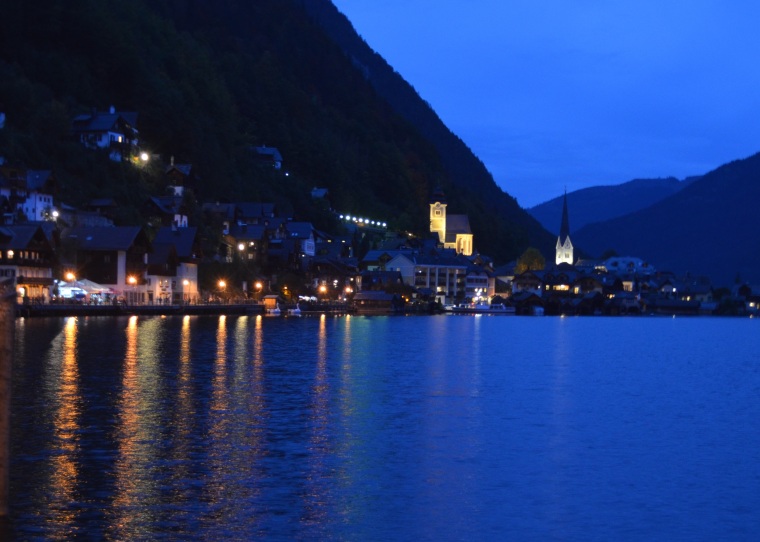 Literally, all shutters are down by 7 pm, even the supermarket and the cafes pack up. The shuttle is delayed and takes another hour. The chill in the air pushes you to take refuge in a bank’s ATM area…at least its warm inside. When you finally drive off in the shuttle, the only movement that remains behind you is the soft rustling of the leaves and the gentle ruffling on the waves. Quietude has been restored to Hallstatt. At least till tomorrow.