A deeper look at Gaudi’s architecture…

Barcelona’s most famous Catalan Modernism artist-architect, Antoni Gaudí made a livelihood from constructing (or deconstructing) ‘fantasy homes for the rich’ and dreamt of completing a ‘cathedral for the poor’. His legacy lives on through some of the most recognised icons of Catalonia. You’ve seen the pictures. Now dig deeper into his craft.

The number-one tourist attraction of the city is the eternally unfinished Expiatory Temple of the Sagrada Família. Curiosity builds up with each surreptitious flash from between buildings and trees. Face-to-face with the giant unfinished stone masterpiece, you’re transfixed momentarily. A church, a spaceship or a theme park! Unusual ice-cream cone spires touch the skies at 394 feet. Dizzying verticality!

A heavily ornate facade decorated with incredible statues…masked figures, cloaked figures, figures clinging to columns. Harsh and angular sculptures, faces capturing intense emotions…grief, compassion, betrayal are portrayed perfectly. Statues of Roman soldiers with robot-like jawlines…out-of-place in a church, yet, fitting in so right. Try not to cringe as you crawl along the long queue. 3 million annual visitors to this gigantic construction site contribute about 25 million euro towards the completion of Gaudi’s obsessive project. At the entrance floor, sketch-like drawings depict different stages of Jesus’ life…so simple and unpretentious, as if from a child’s hand.

But the interiors will really blow your mind. All the ingredients of a medieval cathedral…stone, light and height…yet an end result that disorients you. Contemporary, stylized, geometrical. Like a modern art painting, it is abstract and interpretative. Scale, shapes, colours…everything is fanciful, magical, exaggerated, even fun, like a sci-fi movie set. Bone-like twisted knotted columns imitating tree-trunks, branching out upwards like an enormous forest. Vast geometric stars decorating the ceiling, punctured by open hyperboloids…a glimpse of heaven? Shifting bright patterns on stained-glass windows decorated by seashells, fruits and flowers. Nature and organic inspirations everywhere. You are in an enormous spaceship in a different galaxy. There’s a magical spiral staircase with metal railings. Pillar shapes that start as squares, change into octagons and finally become circular. Sagrada Família is so dramatic and visually distracting that you doubt whether it can ever be a real place of worship? 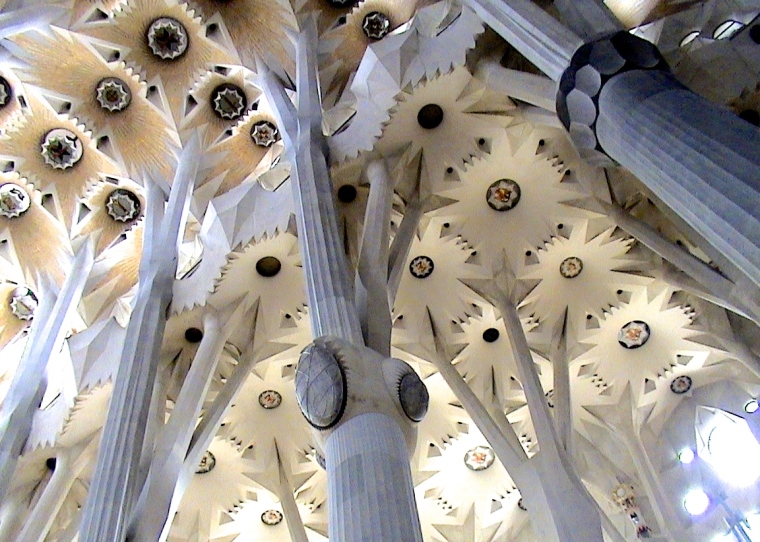 Several generations of workers, artists and architects have contributed to the creation of this timeless monument. Many of them will witness the grand unveiling in 2026…what a moment that would be! Gaudi challenged the limits of creativity. He reinvented the concept of a church that some people love, and others hate with a vengeance. What about you?

La Pedrera (Casa Milà), is one of the quintessential examples of Gaudi’s unusual experiments with residential design. The white wavy stone walls exterior give an impression of being carved out of a huge rock, almost a cave house. Stare hard and long…the concave-convex wall shape creates a strange illusion of movement effect…of course, it isn’t moving at all. The rather plain windows stare back at you with multiple unblinking eyes of an hybrid undersea creature. And an almost messy hotchpotch design of wrought iron grills on the balconies…what is that…maybe a bunch of Moderisme flowers?

Through a pretty crochet lace-like ironwork and glass gate, you step into a central courtyard flooded with natural light where large stone columns support an unimaginably lovely, hazy spray-painted ceiling…like Monet’s garden landscapes! Complete a audio-guided tour of the apartment, studying the rooms and their furnishings, trying to get a sense of how the owners lived here…carpets, chandeliers, bedspreads, crockery, paintings, every little detail was meticulously in place. No conventional weight-bearing walls…instead steel, arches and pillars have been used for an innovative circular design. A small Gaudí museum in the building shows the biography of the famous artist along with various small exhibits.

The most fascinating element is not inside but over the building…a never-seen before undulating rooftop that ebbs and falls in random slopes, like the landing site on some unknown planet somewhere in the cosmos. 30 bizarre chimneys of varying sizes poke out at different spots…eye slits, pointy hair peaks and all! Star Wars again. When the owners had commissioned their house to Gaudi, they had no clue that it would be declared a world cultural heritage site someday, with an entrance fee of 22 € and people would be tramping in and out of their cosy home all through the year! Surprise!

Casa Batlló is an even bigger surprise package. The grandiose facade hits a home run instantly…like a beautiful coral, its indigo, aqua, brown and green tinted rough spray of coloured mosaic glisten in the sun. Masquerade mask-shaped balconies, weird bone-like columns and a tile-scaled humpback roofline that resemble a dragon’s back. Kudos to Gaudi for converting buildings into works of art! Again, the familiar inspiration from nature is obvious, as also a childlike innocence, creating dream worlds and adventure lands where mythical is reality. 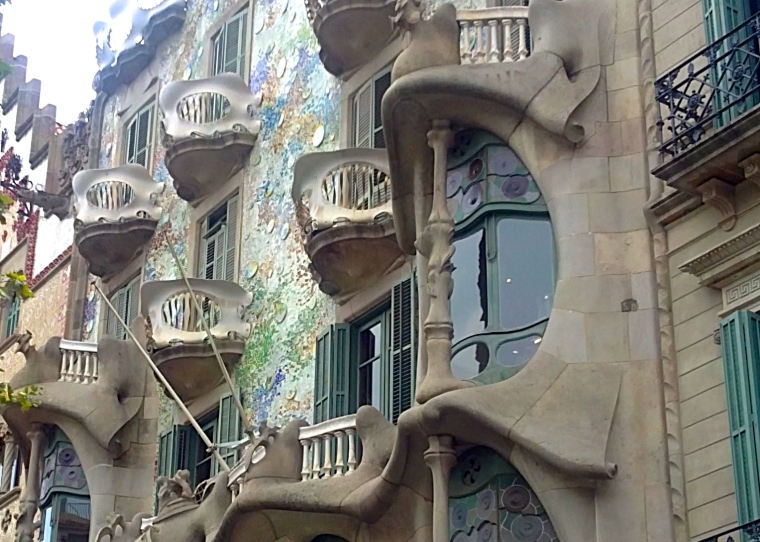 One step inside and you stop short…pastel walls blended into a ceiling which curves and slides randomly…and a solid mahogany staircase led up to the next floor, where a joyful spectacle full of fantasy, organic elements, symbols and colours awaits. This is a children’s storybook and you are 20,000 Leagues Under The Sea! Porthole windows are inspired by submarines, doors are inspired by waves and the stained glass designs are inspired by corals and marine life. An amazing ceiling and scone…like a whirlpool seen from under the sea. A central blue-tiled light well gives a sense of being in the depths of the deepest ocean, from where rays of light pierce the surface of the water. Archways in the attics evoke the image of a rib cage of a giant sea animal.

On the roof, the shades of dull multi-coloured mosaics fade into each other from dark to light, as if they had discoloured with time…the dragon back that you observed from below looks real, extra authenticity added with a line of curved tiles along the length…like the dragon’s spine! A large garlic shaped chimney turret with a cross represents the sword of St. George (patron saint of Catalan) piercing the dragon’s back.

Gaudi gave wings to his limitless imagination and he flew high, sky-high…without stops! The pragmatic and the idealist in him coexisted in harmony. His work and passion merged as one.  Nutcase or genius…his headmaster is said to have debated when Gaudí received his architectural degree in 1878. You decide!

94 thoughts on “Three Barcelona icons that will blow your mind”