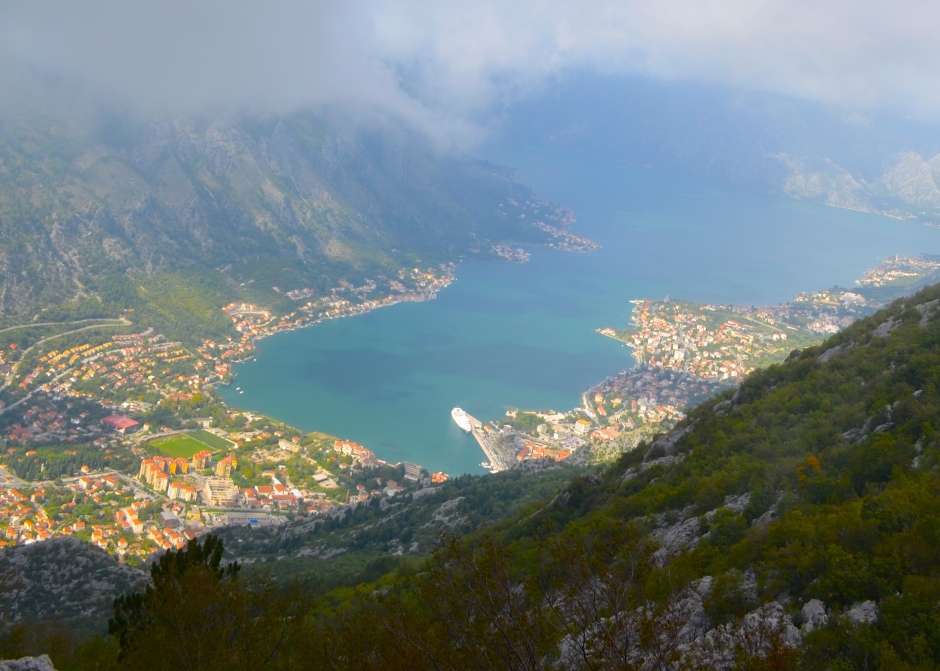 A route so spectacular, it will extract involuntary Confucianist soundbites, celebrating undying love for roads. Because its paradise found, sprawled before your eyes for miles and miles, as you ascend 1000 meters above sea level up Mount Lovcen from Montenegro’s bay-facing capital Kotor. Yeah, you’re probably juggling reflexive philosophical mutterings with overwhelming emotions of gratitude. But concentrate on keeping those blinkers glued to the window pane. Panorama after panorama unfolds. 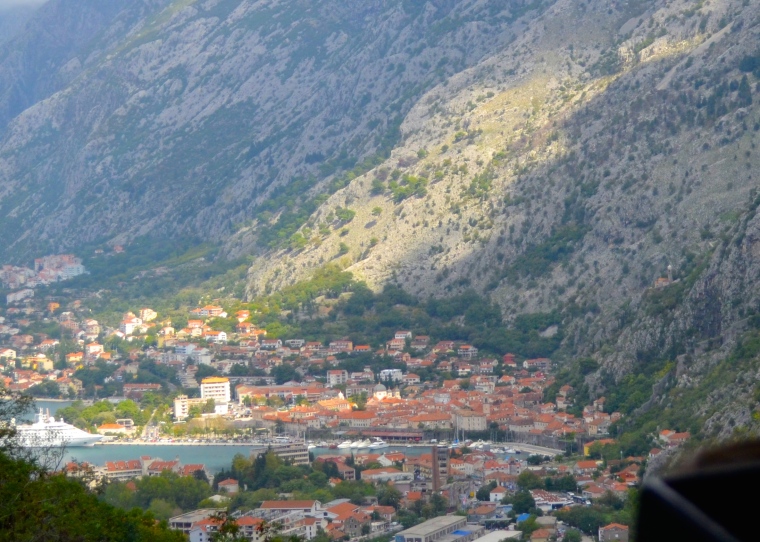 The uphill journey with unbelievably divine views is just less than two hours, but its memory will outlive its short duration by far. The azure Adriatic far below will sparkle like a turquoise topaz nestled between dark craggy cliffs that stretch into the distance till they fade into nothingness. Little red roofs speckling the bed of velveteen emerald green will sunbathe in the glow of the sun. Spirits will lift, poetic rhymes will form, hands will be held and hearts will soar with each curve on the heavenly road over Montenegro and the Kotor Bay. 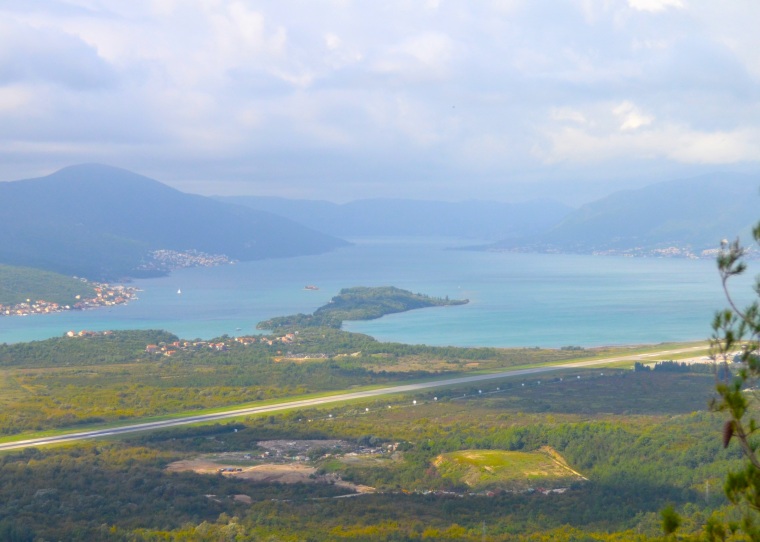 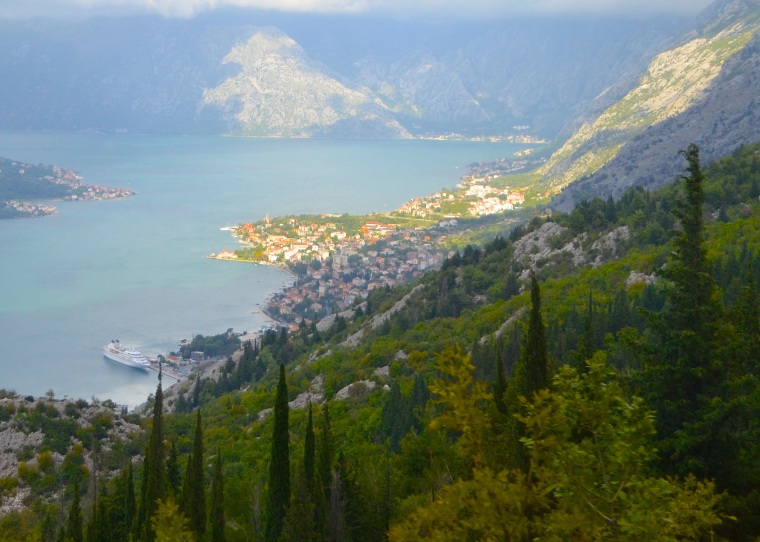 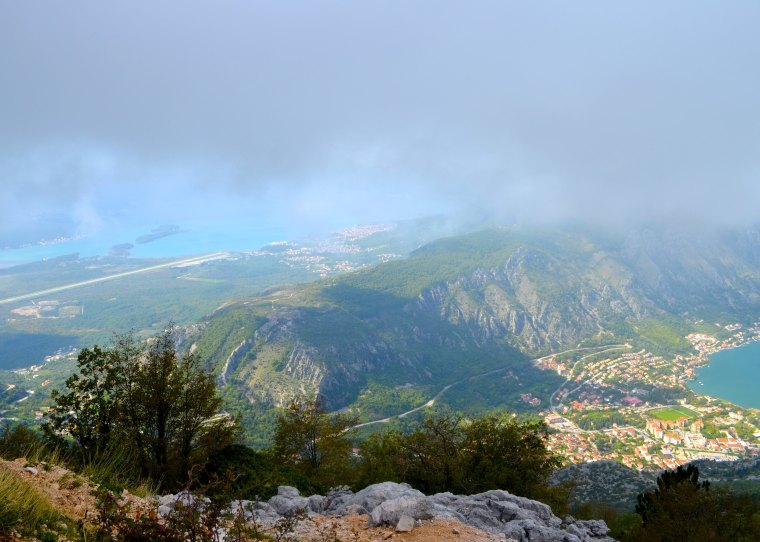 Hearts will soar, yes. And hearts will also sink. Miraculously, at the same time! Because of 25 dizzying, hair-raising, gut-wrenching hairpin bends. You may encounter a vehicle from the opposite direction, and the road being so narrow, your bus will back up. While you side up precariously close to the edge of the cliff, you may hear heartbeats (let alone pins drop) in the bus! Like our guide, maybe yours will attempt to lighten the solemn mood in the bus by narrating the joke of a driver and a priest, who reached the gates of heaven to find that admittance for just one. She will go on to reveal why the driver was finally chosen over the priest…because drivers have more power to influence prayers than priests! (Out with it, aren’t you praying earnestly right now?) 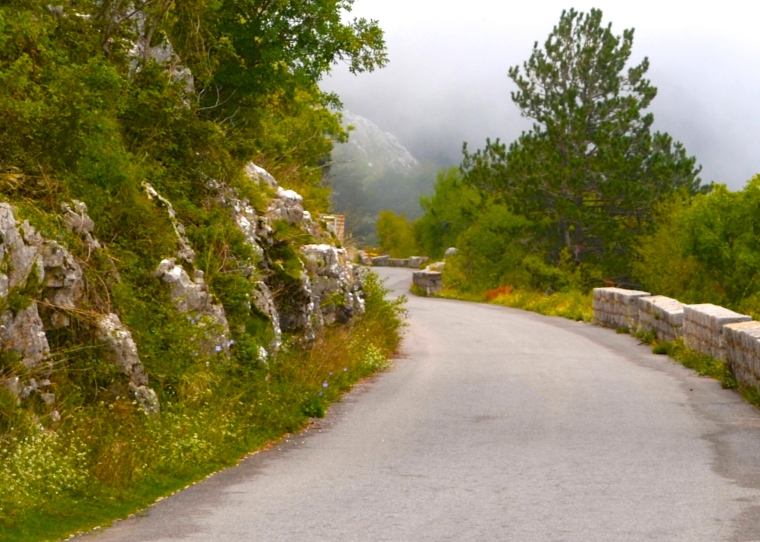 Gaze far into the distance below and notice the“M” shaped road. There is a legend to it. Apparently, the engineer assigned to build the road was in love with the Montenegrin king’s wife Milena. Possibly the most humungous initial anyone scrawled anywhere on earth! This unrequited love story may shift the theme of the ride from spine-chilling to romance. Finally, with the last of the hairpins behind you, breathing will stabilise and you will silently bless the driver for his finesse. Deep valleys will transform into a wide plateau surrounded by the protected wilderness of Lovćen National Park. New landscapes.

The inevitable stop will be Njegusi, an old mountain village famous for prosciutto ham and home to just 50 stone houses. No prizes for guessing the recommended lunch. A simple delicious ham-and-cheese sandwich in the unpretentious ambience of a rustic log-hut eatery with a blazing fireplace. Perch on the sturdy benches outside sipping a drink or a coffee, trying to detect the balance of fresh mountain and sea air, responsible for the characteristic taste of the smoked specialties of the region.  Then browse in the stalls around for local produce of the region…pick from cheese, prosciutto, honey, rakija, hand-woven mats and souvenirs. Stroll around the charming stone houses. Chase cats. Race with hens. This is life up here. Sense it. 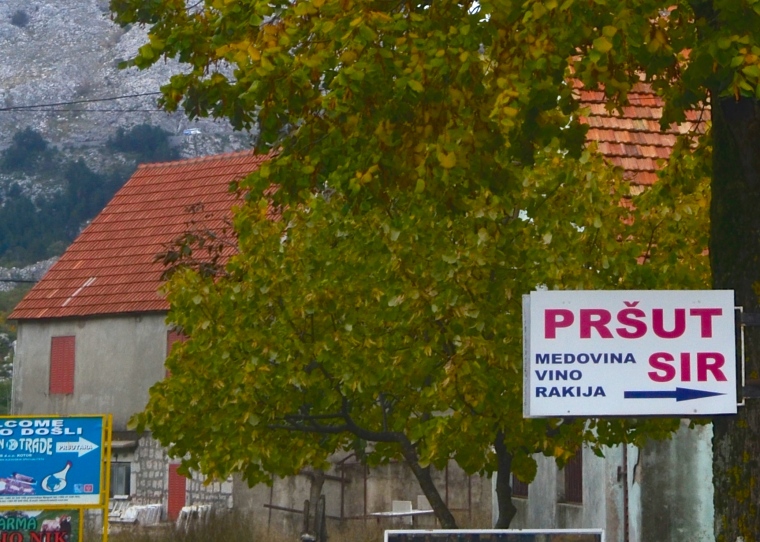 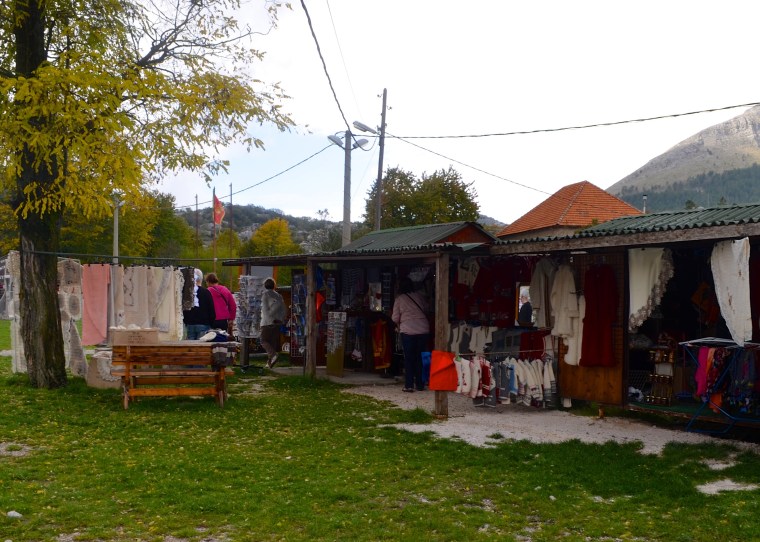 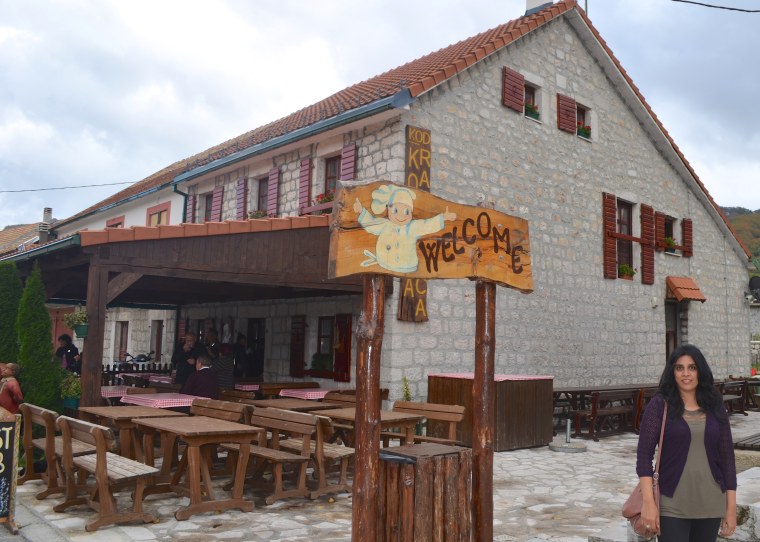 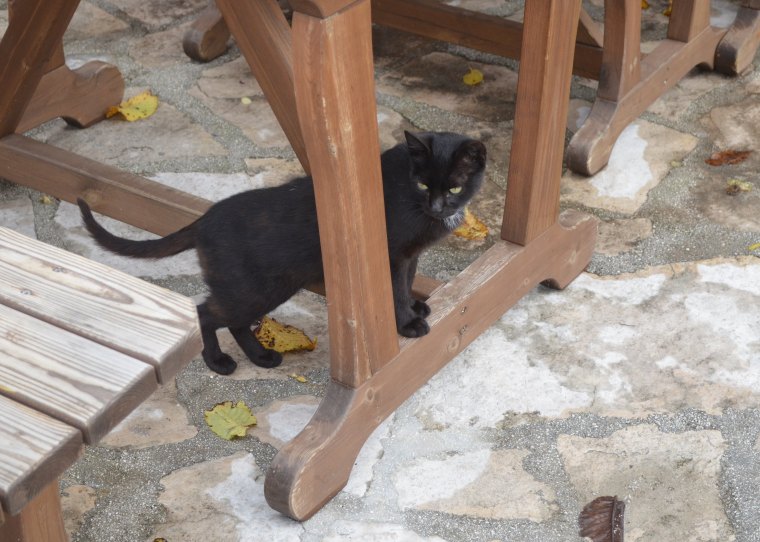 Visit the modest home of Montenegro’s most important ruler, celebrated hero and statesman, Petar Petrovic Njegoš’. Then take a slight detour to the top of the second highest peak, Jezerski to reach the Njegos Mausoleum, designed by famed sculptor, Ivan Mestrovic.  461 steps lead to an uninterrupted view of the entire country. A marble tomb. A nine-meter high chapel covered with 2,00,000 gold-plated mosaic tiles. No drama. Only tranquility. 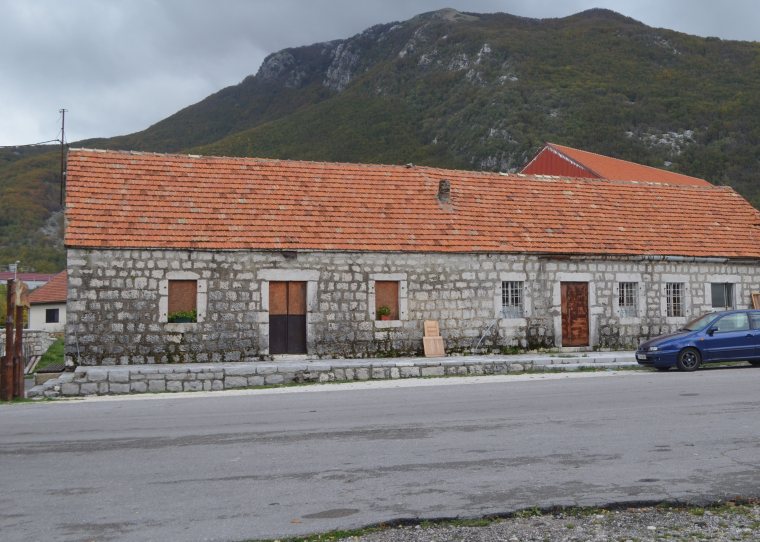 Later, as you ride away through Lovcen National Park, let your eyes work overtime again. Become a bird. Spread your mind’s wings. Absorb the raw wilderness of the rocky Dinara Alps. Drink in the red and gold vibrance of the autumn. Drown in the overflowing abundance of flora and fauna. Sink into the valleys and the meadows. Fly over the snow-capped peaks in the distance. Feel the ceaseless spectacles of nature numb your brain. Scan the cars parked outside roadside restaurants that announce hearty mountain food. People brave that treacherous road for food? Or treat themselves for having risked their lives? Either way, its worth it! 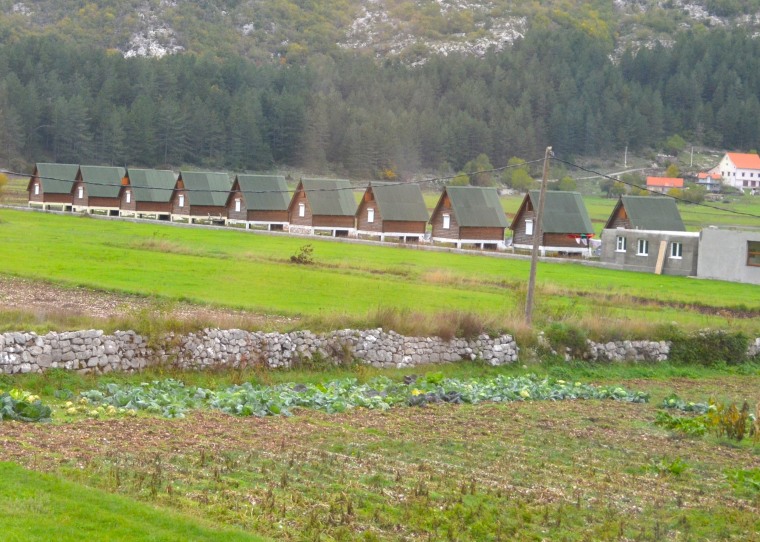 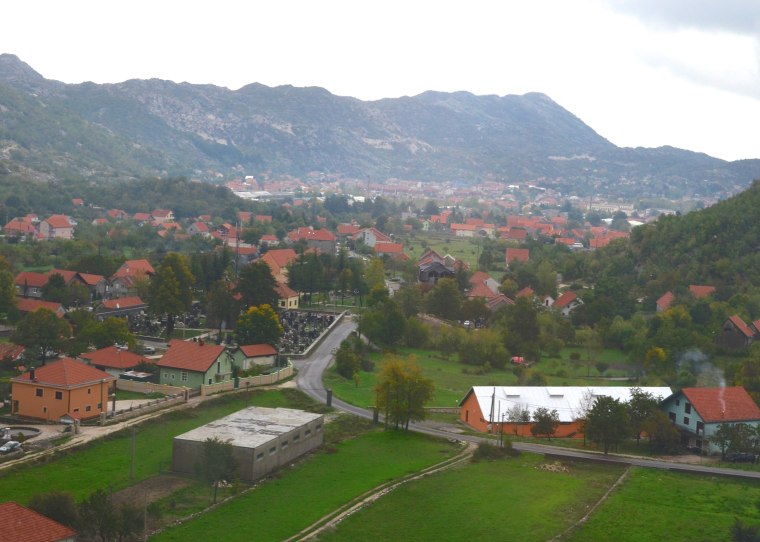 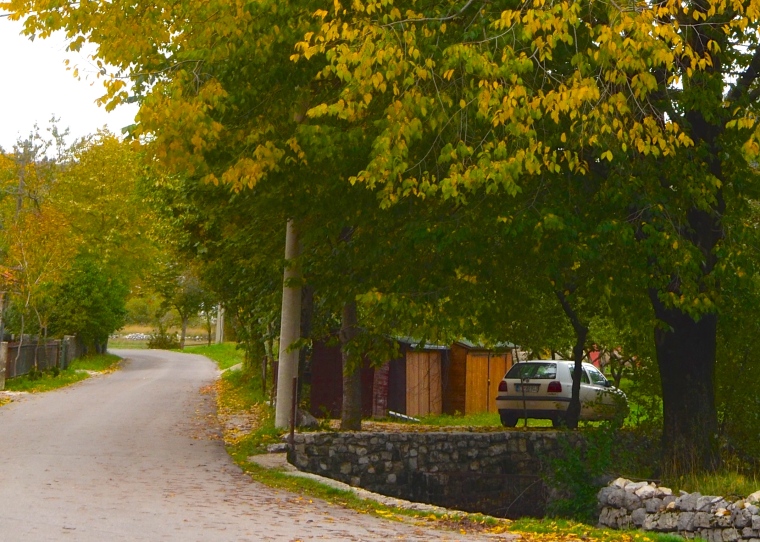