Nimes and Pont du Gard will stun you…

Did you know that picture-perfect romantic French Provence, whose sunflower and lavender fields inspired legendary impressionists like Van Gogh is also home to two of the most jaw-dropping, magnificent Roman structures in the world? And one day is all you need to gawp at their architectural splendour.

History buff alert. Surely, medieval ‘French Vatican’ town of Avignon is on your radar for its two stunning landmarks…the Roman-styled 14th century old Palace of the Popes and the arched bridge, Pont St Benezet stretching across the river Rhone. (Read my related post on ‘Do you know who was madly jealous of the Popes’ powerful palace’ http://bit.ly/2mQlbse). If you have an extra day in Avignon, then grab the opportunity to explore two  exemplary Roman monuments, just 50 km within your reach.

Head first to the bustling city of Nimes, which used to be an important textile centre from the middle ages to the late 19th century. Interesting side factoid: Nimes was famed for a special blue cotton cloth ‘de Nimes’. No prizes for guessing where it ended up? In America, with Levi Strauss, for use as ‘denim’. So, thanks to this lesser known Roman town of France, today we have jeans!

Nimes was actually built by Julius Caesar as a retirement home for veteran soldiers after the fall of Mark Anthony and Cleopatra in Egypt. No surprise that it is dotted with several impressive Roman structures, including the famous Square House (Maison Carree), fabulous Roman gardens, fountains, baths, the Temple of Diana and many neo-Roman churches. All testimony to the remarkable building skills of the ancient Romans under the supervision of Agrippa, son-in-law of Augustus and the foremost construction engineer of those times. Spend a few hours exploring all these if you can. 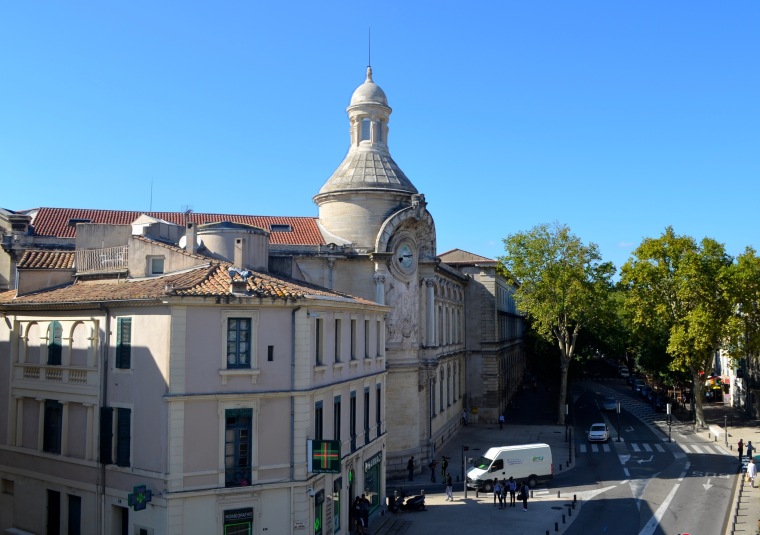 But what you’re really here for is the city’s proudly displayed centrepiece…the best preserved colosseum in the world! Surprised? Built in the 1st century AD, with the capacity to seat 24,000 spectators, this masterpiece stands erect in one piece, minus the sliced facade of the one in Rome. And its no less awe-inspiring.

Equipped with an audio guide, you will easily lose yourself in the tour for a couple of hours. There are no gates, just 60 open welcoming arches, all around the circumference on two levels for easy access to the upper level terraces through multiple corridors, galleries and exit stairs. Admission to the arena used to be free, as the Romans wanted to openly encourage a lifestyle of amusement for all. Well, that certainly helped to keep the crowds hooked then. And the tradition continues today…the colosseum is now a bullring! Two annual bullfights ares staged right here during the Feria de Nîmes. Barbaric custom or cultural heritage…the debate continues to rage.

Mammoth stone pillars support the 60 arches, there are no signs of concrete having being used. The steps going up to the higher levels are worn out, the smooth depressions signal wear and tear over the centuries. Who was the first person to leave his footsteps here, you wonder…does your foot fall exactly where his had once? At the second tier, you may need to shade your eyes from the intense, brilliant sunlight, as you ogle at the 360-degree view. Try counting the rows of stone benches encircling the structure at multiple levels…which seat would you choose? 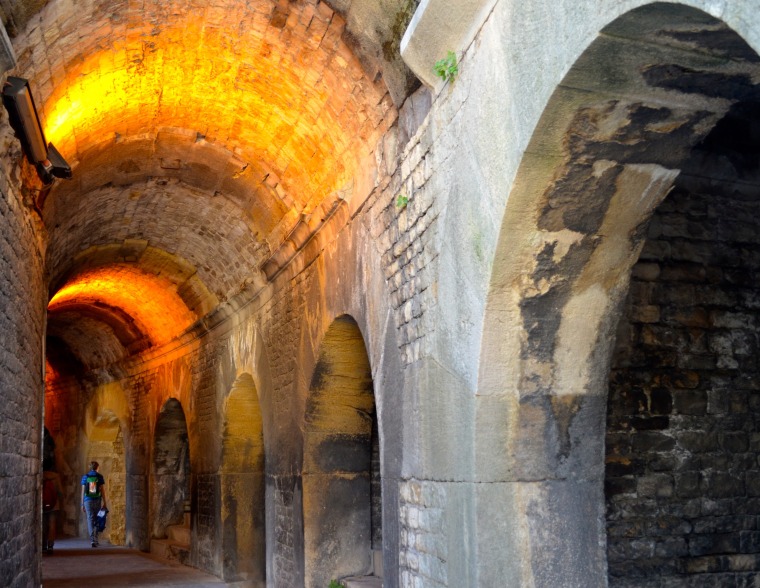 Visualise a toga-clad crowd, cheering wildly as drivers guide their chariots with fiery energy around the ring below. Go to the very top for an even more rewarding view of the complete colosseum and the sprawling city of Nimes. Imagine the architectural prowess of the ingenious Romans. Even in those ancient times, they had devised a retractable roof for the arena…a vellum canopy spread out over the tiers of seats; the holes for the canopy’s poles are still visible. 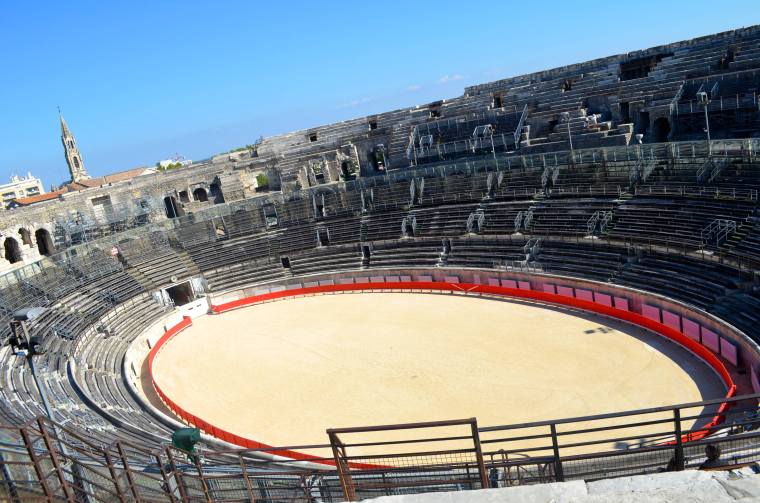 Later, stroll into the two museum sections: Gladiator’s Quarters and the “Colours of the Corrida” to study the costumes, fighting gear, pictures and short film sequences of gladiators and matadors. Try to analyse your emotions, while you dive into the past, when entertainment had a sadistic flavour and human primal instincts were glorified.

As you walk out, consider this. Driven by the need to fulfil Nimes’ increasing need for water for its Roman baths and irrigation, Caesar ended up accomplishing another incredible feat: a 50-kilometre long canal, supplying over forty million gallons of water each day to Nimes. And the world’s most impressive three-tier stone aqueduct crossing the Gardon river valley. Pont du Gard, a one-of-a-kind UNESCO heritage site, about 3o km away, is your next stop.

The Pont du Gard park complex is a haven for nature lovers…hiking, cycling, horse-riding or canoeing…pick your poison. Or simply amble along from the visitors’ centre out to the ‘pont’ (bridge) to marvel at the impeccable construction, in the backdrop of an enchanting river valley. 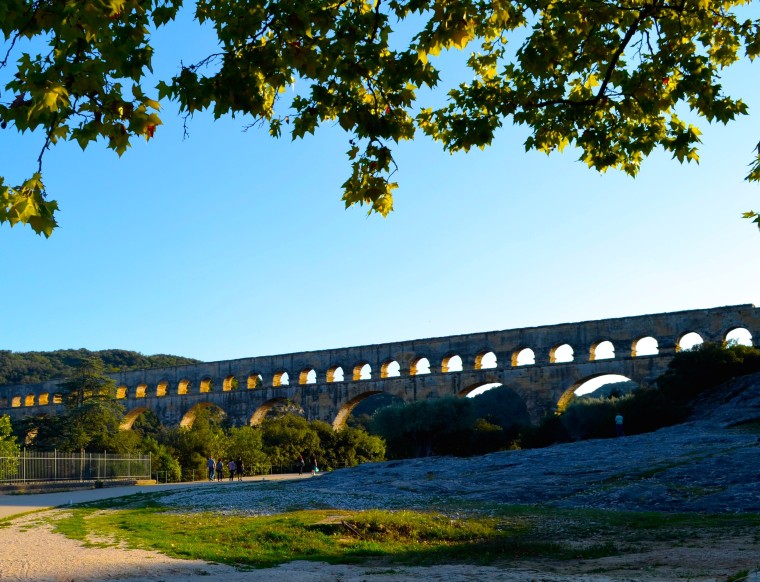 The massive bridge is 274 meters in length and 49 meters high. At the top of the edifice is a covered pipeline. Although, no longer a functioning aqueduct bridge, the very fact that it is still standing is testament to the outstanding skills of its builders. Not only is this the highest and most impressive of all the Roman aqueduct bridges, it is also one of the best preserved. Cross the walkway on the second tier, pausing to touch the massive mortar-free arches. Reflect on the impeccable precision of the massive engineering project. 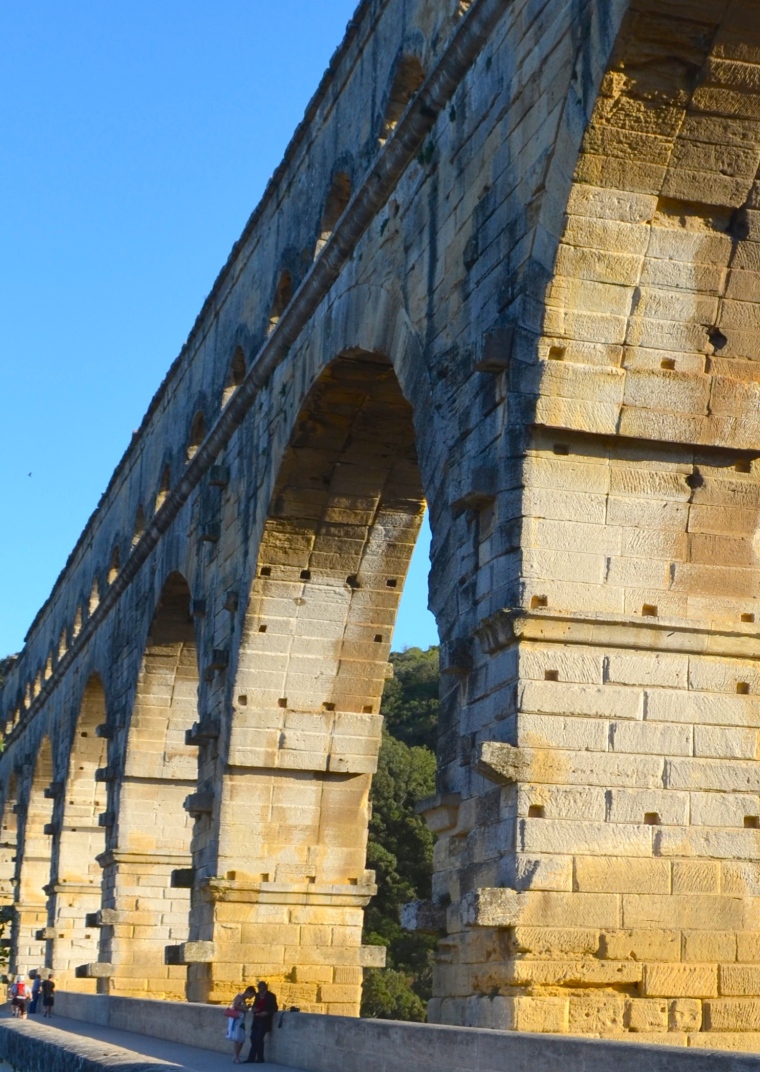 The rays of the early evening sun play hide and seek through the arches of the Pont du Gard. The bridge will be completely awash in golden sunshine, as the sun kisses the soft yellow complexion of the limestone blocks. Sit by the banks, watching the gleaming, twinkling smooth pebbles on the river side and listening to the peaceful trickle of the water. You will find yourself taking unending pictures of its every arch and every angle, until it is time to bid this Roman remnant ‘adieu’. And in the fading glow of the dusk, it will dawn upon you… this is France, not Rome. 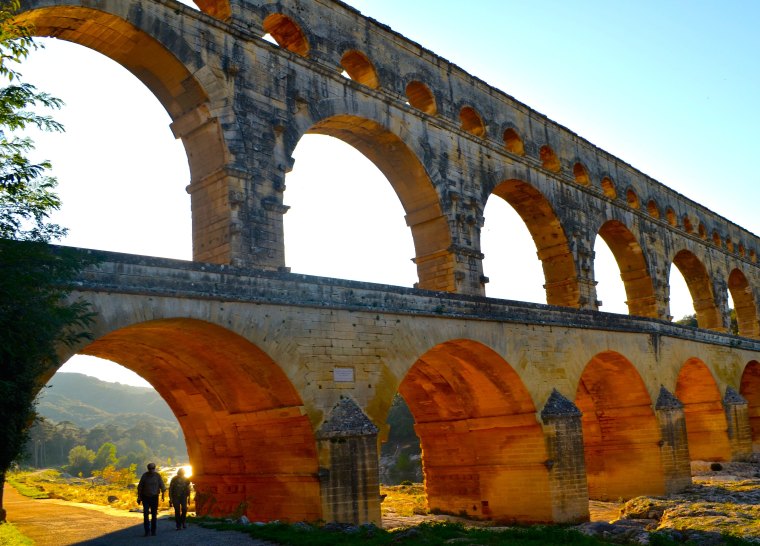 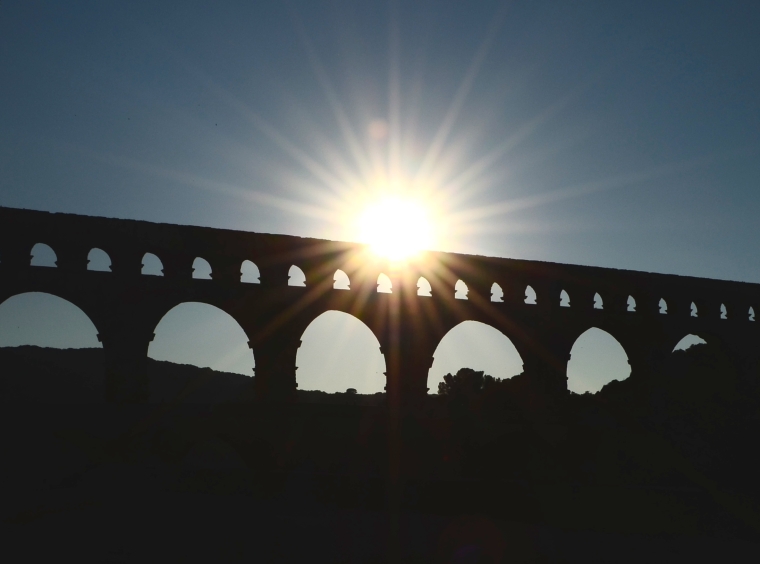 134 thoughts on “The most amazing Roman monuments hidden in France”