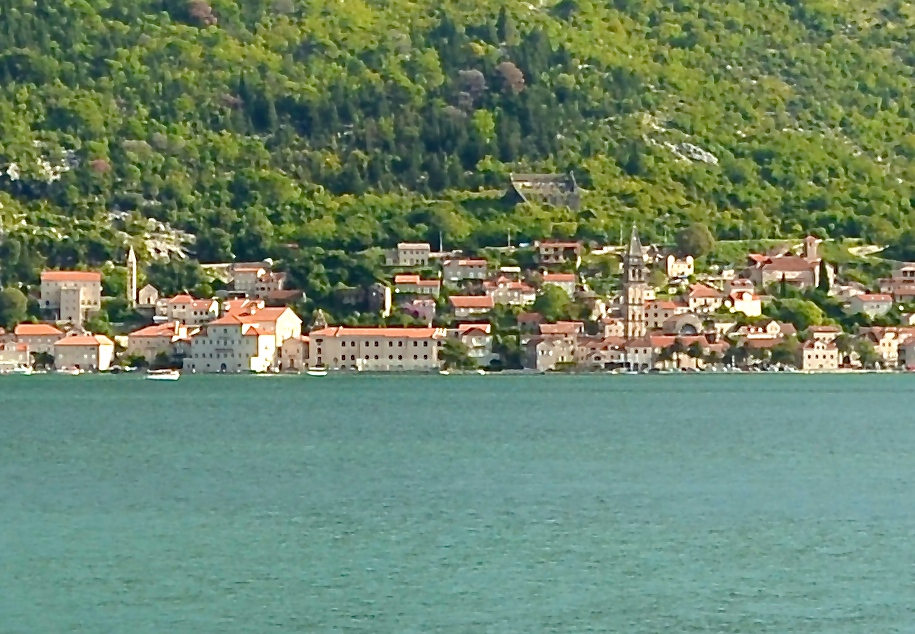 Honest confession. To start off, I was first drawn to Montenegro by the clever deception created by James Bond’s Casino Royale. In reality, not a single scene was shot there. Revelation. It is a thousand times more enchanting than the fantasy its name evokes.

If you’re only 350 km away in neighbouring Dubrovnik, missing one of the youngest countries of Europe is a sin. Steal a day for a fascinating preview, as we did, and you will be left hungering for more. The drive, for one, is a treat for the eyes. Leaving Dubrovnik’s medieval walls, as you hit the spectacular road high above the coast, you will be engulfed in a sensory overload of unspoilt nature. Drench in the sight of the sparkling deep-blue sapphire waters, the mesmerising views of the sea at every bend, the raw exotica of the looming mountains and the velvety lushness of the forest cover.

Small, sleepy towns with mundane apartment blocks along the Adriatic coastline give away the reality. No laid back sophistication of Croatia here… Montenegro is far less prosperous. Flow with the enchanting everyday scenes…an elderly man reading the newspaper outside his house, a woman and her son running to catch a bus, clothes drying on the balcony, people buying veggies and groceries, unassuming motels advertising ‘camare’ (that’s Hindi for rooms too!). Ordinary people with ordinary houses facing the extraordinary sea. Reflect on the interesting historical evolution…from the Venetians to the Serbs and the Turks to a free country status during World War I and a democracy as late as 2006. Now chew on this…a little over half million inhabitants and a staggering 1.2 million tourists. A country bursting at the seams?

The scintillating drive continues along the stunning Bay of Kotor, Europe’s most southern fiord. For an hour and a half, the two-lane road curves and winds along the 40 meters deep and 20 km long Bay of Kotor, entrapping you with its silent beauty. Towering mountains, rising vertically from the sea, peaks kissing the skies, mystical monasteries carved into solid rock. Houses dotting the hills on one side of the narrow road, and the glittering waters of the sea mirroring the glory of the vista. Melt into the magic.

Stop for a photo opportunity of the famous two islets, Sveti Dorde, the natural one, covered with trees and the manmade ‘Our Lady of the Rocks’, where a painting of Virgin Mary was discovered inside a rock. Let your eyes lazily hover around the scene of the lake-like bay, enclosed on three sides by the tall mountainous walls. You cannot capture its serenity on film…but its image will creep silently in your heart and stay embedded forever. 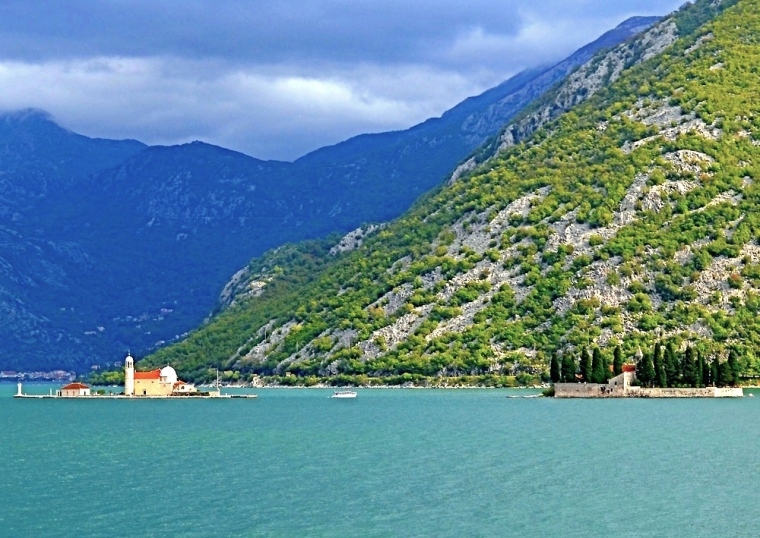 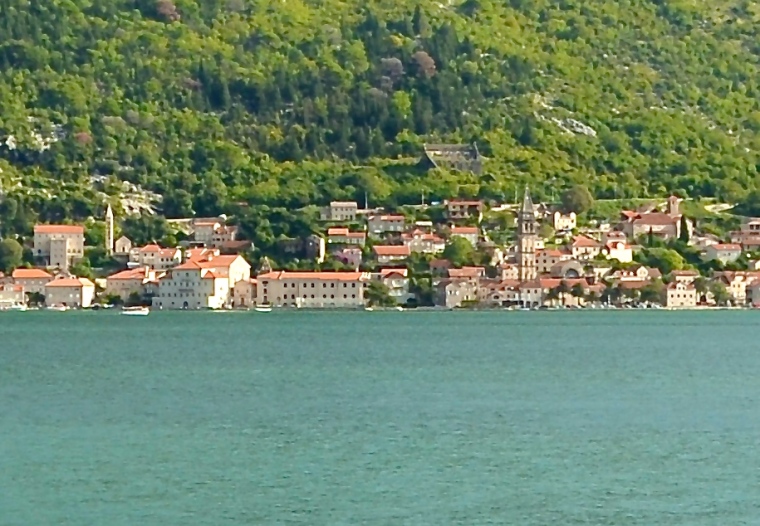 You can see it in its full glory now. Kotor, the most interesting town in Montenegro,  under the shelter of that ‘black (dark) mountain’ as the Venetians called it. An inviting scatter of white-and-red limestone, basking in the sun, on the glittering shores of the Adriatic, where minimum temperature never falls below 7-10 degrees. No nail biting snow here…simply unending gorgeous weather all year round. Unemployed or not, Montenegrins sure have the best of both worlds!

With just about 13,000 inhabitants, of which 3000 occupy a cozy maze of ancient stone houses inside the delightful labyrinth of the 7th-century fortified city, the town curiously manages to retain its sense of space. An imposing walled structure and fortifications that once served as protection against invaders, now attracts tourists by the millions. The wall snakes 1000 steps up the steep limestone cliffs behind, which faces the most beautiful bay in the world. The hike is worth it, if you have the stamina and the luxury of time.

Brace yourself for impact as you enter the fortified town from the main Sea Gate into the main square. It will be pulsating with hordes of tourists, but don’t lose heart just yet…tranquil spots await. Its easy to spot the usual suspects…the old Arsenal, Theatre, Rector’s Palace and the Clock Tower. Trace your eyes along the continuity of the stone architecture all around…simple houses share walls with these symbols of the town’s medieval past. The impression is one of uniquely modest grandeur (if you can call it that).

There are a handful of restaurants, cafes and hotels, and lots of shopping to cater to the crowds. Yet, Kotor is clearly less commercial than Dubrovnik, and therein lies its brand of charm. An innocent naiveté lingers in its Adriatic air. The crowds will thin away into oblivion the moment you step into a quiet side street. One cannot really get lost in an area less than 400 square km, but it’s easy to stray and lose track of time…so put away that watch and disappear into those delightful folds. Forget agenda, maps and landmarks. Tell yourself you have nowhere to be, and roam around for hours.

The Venetian influence is obvious in the traditional mansions and the churches spread across the town…in the green shuttered windows, stone balustrade balconies and the decorative archways. Reach out and touch the blackened limestone…many of these solid structures have stood the test of time. 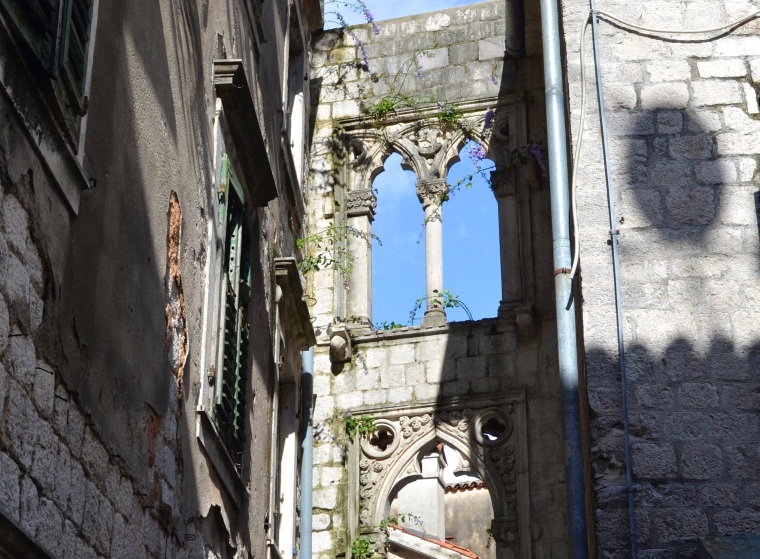 There are more churches than you would expect in such a small area, so wander into as many as you fancy. But don’t miss the largest of them…the UNESCO protected Catholic Cathedral of Saint Tryphon, tucked away in the crowded St Luke’s square. One of the oldest on the Adriatic coast, this temple dedicated to St. Tryphon, patron saint of Montenegro, goes as far as back as 1166. Attached to the largest Cathedral is the town’s smallest and strongest, St Luke (it has survived most earthquake disasters). This one deserves special attention for of its two altars, Orthodox and Catholic. Browse the incensed interior. No Notre Dame this, but you will be overpowered by the quiet elegance. 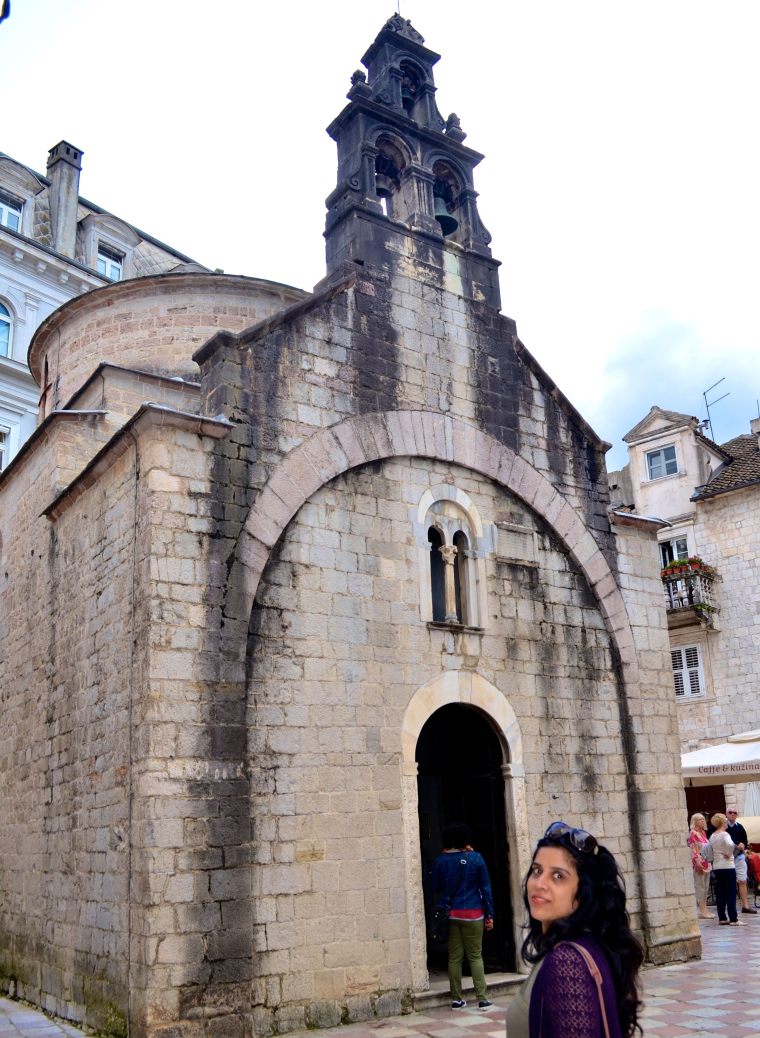 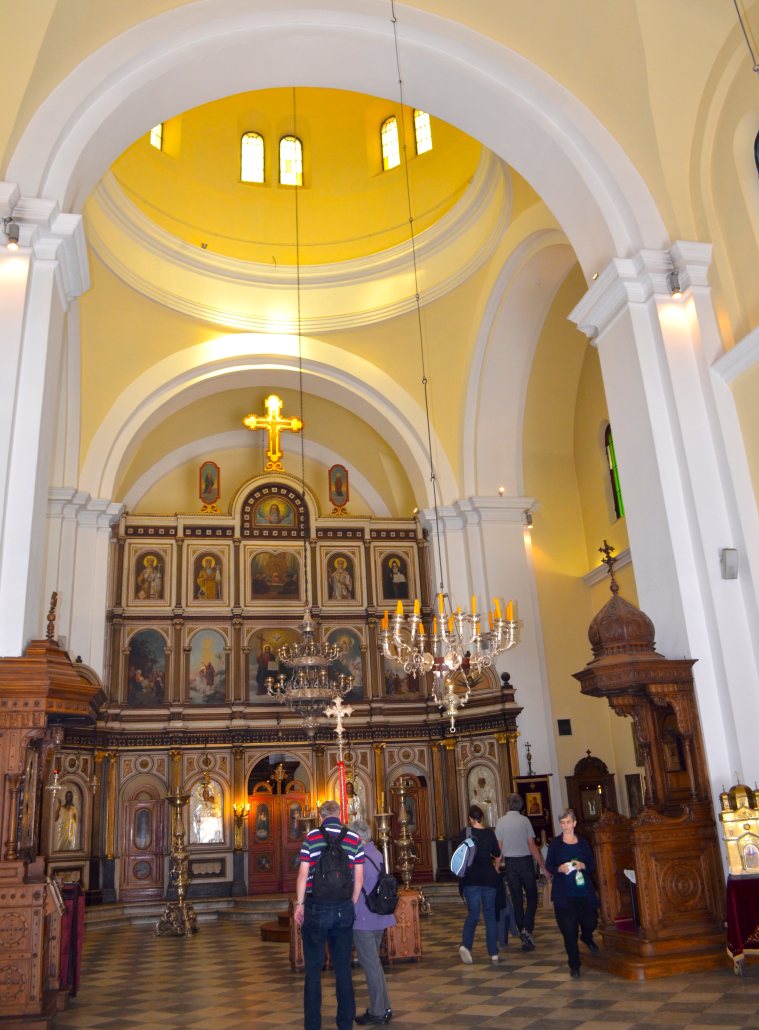 Back in the main square, steal time to sip coffee and savour a slice of melt-in-your-mouth cake at Forza, Kotor’s famous pastry shop, watching the unending crowds assemble and disperse. Up above, a local resident will peer curiously from her bedroom window into the street below, her arms resting on the window sill, taking stock of the crowds gathered outside her home…unaware that she is posing for an enchanting photo. She will travel home with you as an image in your camera…a lovely memory of a glorious afternoon in Montenegro’s prettiest town. And as you leave, you will find yourself making a pact…I’m going to come back to this country for more. Much more!

85 thoughts on “Marvel at the unspoilt magic of Montenegro”