Pretend to be Austrian royalty…

If you’re smitten by lavish and ostentatious heritage of Vienna, you’re bound to fall in love with Schonbrunn Palace. The summer retreat of the Habsburg royals is a worthy candidate for travellers with a cultural bent of mind, as well those who lust after perfection in garden landscaping.

In 1726, Schonbrunn (derived from ‘a beautiful spring’) was redesigned as the largest country palace estate under the reign of the great Empress Maria Theresa. The aristocratic residence with its magnificent terraced garden spread over 120 acres of land, is an icon of imperial opulence of the Habsburg dynasty, one of the principal sovereign dynasties of Europe from the 15th to the 20th century. This UNESCO World Heritage List since 1996, located barely an hour’s drive from central Vienna by bus, is one of my most-recommended Vienna experiences…specially if time travel into the past delights you or if you fantasise about being a royal (or a loyal) courtier from the bygone era.

The drama unfolds at first glance, there’s no time to prepare…the grandeur just hits smack in the eye. Even as you walk across from the bus stop, you can see the palace through the iron grills. You are greeted by two giant marble obelisks topped by golden eagles on either side of an ornate iron gate, leading into a vast courtyard with green patches punctuated by baroque fountains. The formal design, impeccable order and rigorous symmetry is evident immediately. Across the panorama in your line of vision, stretches a wide, elegant, three-storied yellow and white facade, so harmonious that it looked more like a painted period movie-set backdrop rather than a three-dimensional building. On the left and right sides, identical single-storied facades in the same yellow-white colors mirrored each other. Not so much over-the-top. Just quietly dignified. In an overpowering sort of way. You feel tiny.

The usual tour includes a couple of hours marvelling at the imperial apartments inside, but we decided to skip the palace completely, having already got a taste of the Hofburg and Belvedere Palaces in the city. So, we made our way towards the the extensive gardens behind, where a breathtaking vistas awaited us. A vast square kilometer of formal tree-lined avenues, French-style lawns and flowerbeds, bordered by woods beyond and a sharply rising grass-covered hill in the distance…sheer man-made perfection. 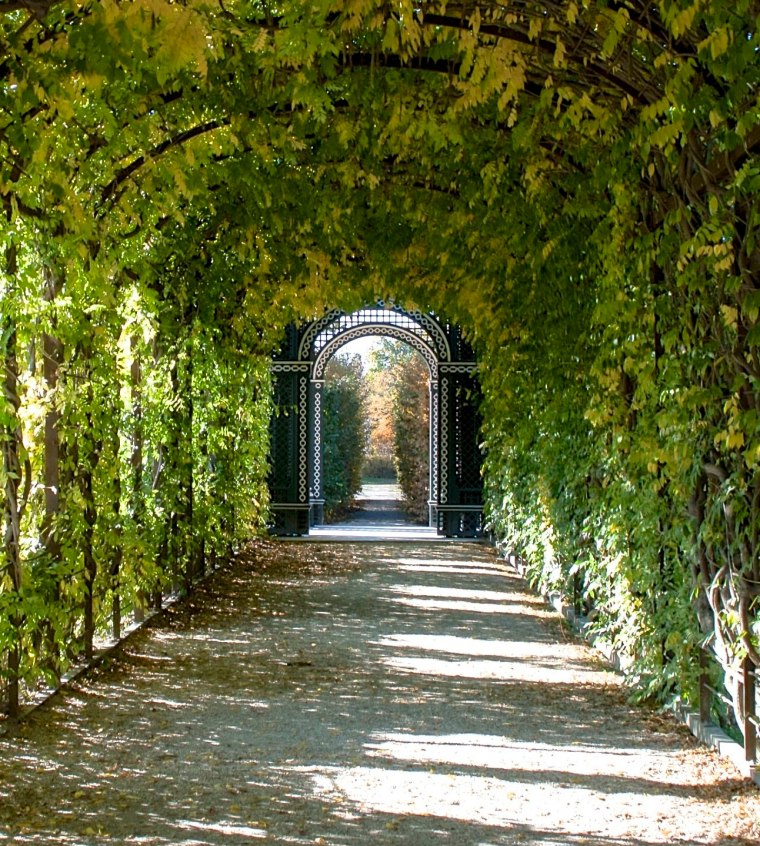 In the Baroque times, gardens, as a natural extension of the palace, indicated the status of the ruler…and this elaborate sculpted garden, the Great Parterre, makes more than an impression. There are 32 gorgeous statues of mythological deities and virtues lining either side of the gardens. The green lawns are adorned with pretty flower beds following traditional embroidery designs. Just imagining the gorgeous aerial view took my breath away…oh, for the vision of velvety green carpets with delicate curving tendrils in red, pink, purple, white and brown! Too bad the Habsburgs didn’t have helicopters! Some genius architects they must have had, to be able to visualise and craft such mammoth marvels without 3-D computer software! No easy feat, this. 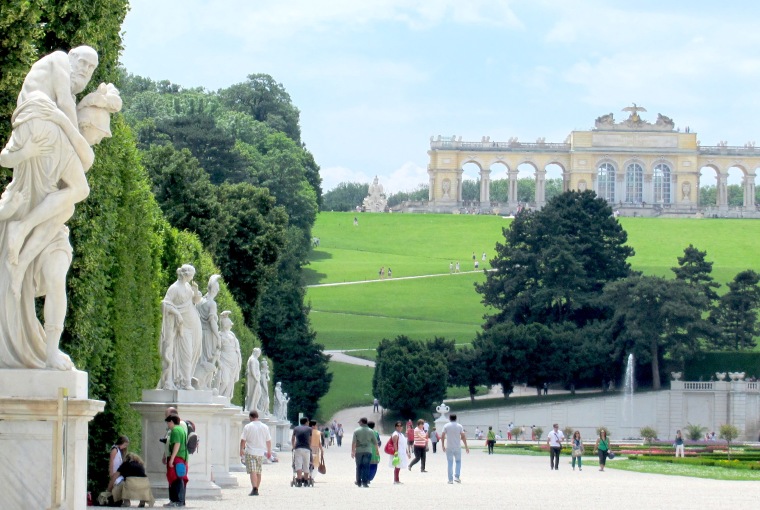 Hidden away within the grounds on either side, are various architectural delights…lakes, fountains, fake Roman ruins, statues, and greenhouses. It’s a Garden of Eden…minus the apple and the sin. Peek. Discover. Linger. Laze. Wander. Seek solace between the shady trees. Speak wordlessly with the speechless sculptured beauties. Soothe your soul with the soft breeze that tickles the rainbow flower beds. Just forget who you are. Where you came from. Where you are going. 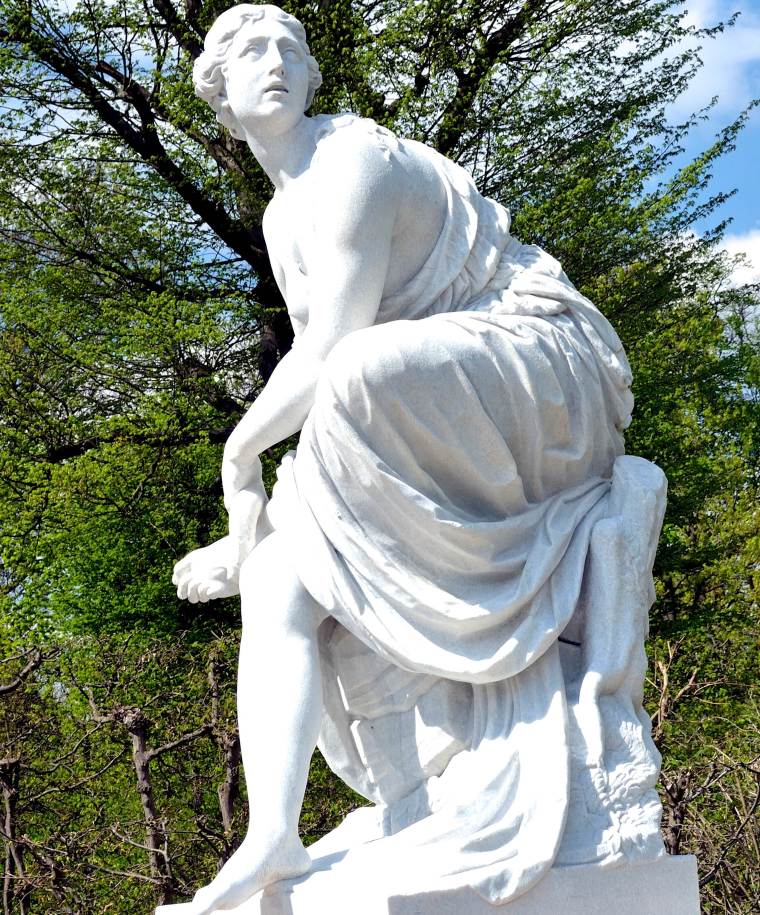 Have some fun. Head into the 630m-long head-high yew hedge labyrinth. Playfully duck into meandering paths, reverse from abrupt dead ends, trace the twelve signs of the zodiac carved on stones scattered along the hedges and finally, smirk in glee upon reaching the centre, where two ‘harmony stones’ symbolised the flow of energy between rock and mankind. Funnily, the original Irrgarten (‘lost garden’), built as a pleasurable walkway for courtly society, was demolished in 1892, owing to growing ‘disreputable encounters’ that were taking place in its secret corridors! Naughty, naughty! But you be good.

Back at the far end of the Great Parterre, we stopped to admire the flamboyant Neptune Fountain overlooking a placid pool. Trident-wielding Neptune riding a chariot, surrounded by tritons and sea horses, demonstrated dominion over the seas, a popular symbolism for the power of sovereign rulers during the 16th-18th-centuries. I studied the ripping muscles of the tritons and the flaring nostrils of the sea-horses…as if they had been frozen in real motion! What modern sculpture could even come close?

Following one of the two zigzag paths up the hill, we ascended to the crowning feature, the Gloriette built to commemorate victory against Prussia and used later as a dining hall and festival hall for the emperor. A mighty imperial eagle perched on a globe over the central triumphal arch, flanked by arcaded semi-circular arches.

From this magnificent perch, facing the gardens and palace across the large rectangular pond on the hilltop, it was impossible not to stare and gawp at the sheer magnitude of the space stretching out before us. The glory of the Gloriette! People strolling along the lavish promenades like tiny specks, bunches of trees along the Grand Parterre like thick green fur and behind the neat yellow-white palace block, Vienna city…like a bed of flowers scattered into the far distance.

It seemed as if I was transported back to the 18th century…the tourists had disappeared. All I could see were ladies with flouncy silk dresses, bonnets and lace collars; and gentlemen with coloured stockings, feathered hats and velvet coats. Horse carriages were rolling past. Notes from a classical Viennese concert were wafting through the windows of the palace. A scene from a Canaletto landscape?

I was lost contemplating the grandeur of the Schonbrunn during its peak…when Empress Maria Theresa in the 18th century, and Emperor Franz Joseph in the latter part of the 19th century had made it their summer residence. Just think…Mozart had given his very first concert to the Empress in the Mirror Room here when he was only six years old and some of his works had their world premiere here at the Orangery too! It was here that Franz Joseph had taken word of news from the front in WWI. It was here that the destinies of countries and continents were decided by Maria Theresa’s strategic marriage plans and political plots.

All that history crammed into one stunning palace…and I was standing right here, savouring it all, centuries later! Am I lucky or what?

91 thoughts on “Do you know of the glorious Gloriette?”