What to see on Las Ramblas, Barcelona’s buzzing nerve centre…

Anyone who’s been to Barcelona will tell you that its most famous boulevard, Las Ramblas is the best place to soak up the cosmopolitan vibe of the city.

The second you join the throngs of tourists and locals, you feel a tingle run up your spine. Call it magic in the air or the sheer energy of the liveliest city in the world…whatever it is, it’s contagious as hell. You can’t escape it! Before you know it, you’re free-falling, swirling, swimming in a sea of people, on a 60 feet-wide pedestrian walkway, where traffic sometimes exceeds 7,000 persons per hour…don’t worry, there is always space for one more!

You can spend a leisurely couple of hours over the 1.2 km stretch running from the elegant main square, Plaça de Catalunya in the north to Port Vell in the south…through a sprinkling of kiosks, flower shops, confectioneries, taverns and cafes, global fast food chains, upmarket hotels and historic buildings.

Las Ramblas actually consists of six ramblas, each with its own name (so the plural, Las Ramblas). Follow our league and start at La Rambla de Canaletes (The Ramble of the Channels, from the old 14th-century northern wall of the city called Canaletes), where the water pipes used to supply drinking water to the medieval city of Barcelona. There is still a famous drinking water fountain called the Font de les Canaletes here, and legend says, anyone who drinks from it will always come back to Barcelona. Why do these legends always spin around travel? Anyhow, FC Barcelona fans traditionally gather at this spot to celebrate their big wins. Take a sip…drink in the history.

This is the start of a sensory overload of sights, sounds and smells, a carnival-like atmosphere weaving a rainbow tapestry of life. Study the many street performers in their outrageous disguises. My first favourite was a black witch in an oversized hat, a white painted face and long dagger-sharp claws. The fun tradition is for you to sit before her in innocent pretence and wait for her to suddenly clutch you from behind. You can scream in mock fear (or real fear) to add to the drama. Passers-by will always look on. Some will take your picture back as a souvenir! 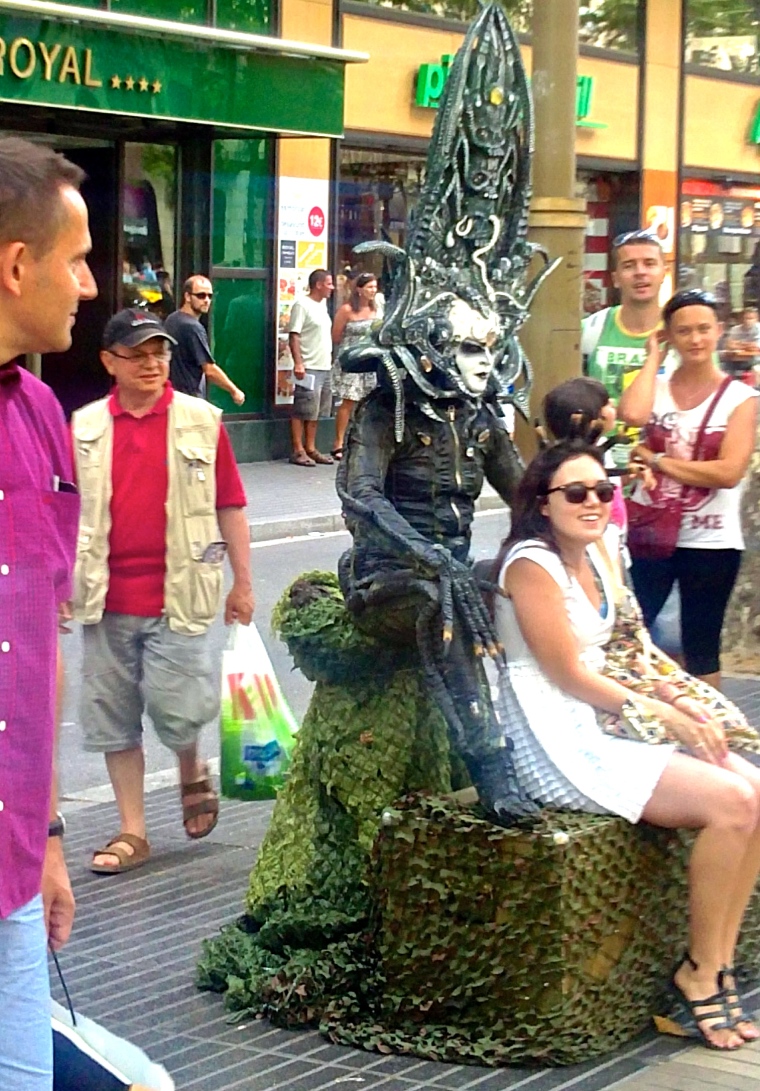 Note the ongoing smattering of souvenir shops filled with ‘I love Barcelona’ t-shirts, mugs, fridge magnets and the rest, manned by Bangladeshi and Punjabi, Hindi speaking shop-owners, their wives and their brothers. Whole families will coax and pester you the moment you even peep in. Soul-less consumerism with a cheap-Chinese production value…but I was intent on leaving my cares behind, I was on the La Rambla roller coaster, and was loving the ride!

The next section, La Rambla dels Etudes (The Rambla of Studies) is named after a mid-15th century building called the Estudi General or Universitat, demolished in 1843. Locate three distinctive landmarks…Reial Cièncas i Acadèmia of Arts, (a theatre since 1910) and the Palau Moja dating 1790, (now an elegant exhibition space) and the church of Betlem Mare Deu. You probably won’t…because you will be utterly distracted by a levitating Ganesha. You will be scratching your head to figure out how he’s suspended in mid-air. You will circle around him, bend over or move closer for a better look…but the mystery will remain, puzzling you even as you walk away finally.

A few steps away, at La Rambla de les Flors (The Rambla of the Flowers), contemplate the contrast between modern conveniences of online shopping with the 19th-century, when this was the only place where flowers were sold in the city. As you dodge the gladiator in Roman attire, reflect on life back then. A young man would really have to make an effort if he wanted a rose to woo a lady and he lived on the other end of town!

Would you believe there used to be over 140 licensed street performers here once? Thankfully the numbers are restricted to about a dozen at a time now…otherwise, imagine the circus! The famous pantomime artists of Barcelona…these living statues of historical figures, legends, myths, even famous personalities appear so authentic. This is fun and games for people like us, but serious livelihood for them. A Bozo clown with rainbow hair and globular red nose ambled by and I reflected on how many hours go into their elaborate make-up and how tiring the days are for these actors, perfecting their silent performances on the streets over years. Some of them look old enough to be in their fifties…tough life!

Next, stop to explore the colorful, lively La Boqueria food market, from where sweet fragrances waft invitingly. Since 1827, La Boqueria has been a market for fish mongers and fruit and vegetable sellers. The famous art deco metal roof from 1914 is visible from a distance. Inside, fruit, vegetables, sweets, smoothies and spices are arranged in patterns like artwork. Third generation merchants advertise their wares in loud voices, inviting you to taste and pick. We opted for a slice of tortilla de patatas, a Spanish omelette that resembles a giant quiche, or a small pizza, about 2-3 inches thick, with a crusty exterior and a squishy inside. It was heavy, with the essential cheese, potato and vegetable fillings. A must-try.

Past the ballerina in all-peach flounce from the Victorian era, arrive at La Rambla dels Caputxins (The Rambla of the Capuchins), also known as La Rambla del Centre. It gets its name from an old Capuchin monastery on a charming square with palm trees, the Plaza Reial. This is also where the elegant Liceu Opera House is located. Pause to study the posters and announcements under the porch…how many turmoils it has survived since the curtains first went up in 1847…bombings, fire tragedies and a major financial crisis in the 1970s…and endured.

Consider this exhilarating thought now. Centuries ago, this was just a river bed (from Arabic ‘ramla’ or sandy ground) marking the exterior limits of the city fortifications, where rainwater flowed down from the hills of Tibidabo. Then, convents and religious houses sprang up in the vicinity and in 1775, a central walkway was built, lined with plane trees, making it the city’s focal point. 19th century renovations, addition of new squares and mansions lent a touch of exclusivity and aristocracy…and the cream of Barcelona started parading here on foot, by carriage or on horseback. Today, a mushrooming of art galleries, trendy boutiques and eclectic restaurants completes the look. A ditch has been transformed into a prestigious city symbol! Fur-clad ladies in stilettos catwalk their way to the Liceu Opera, travellers park themselves in expensive hotels and struggling artists showcase themselves on a free stage, there’s revelry 24/7…entertaining, terrorising, mimicking, beguiling and charming you at every step. Isn’t that fascinating?

Back on the street, we located a former palace (from 1778), now an art centre, the Palau de la Virreina. At our feet was a mosaic pavement designed by celebrated modern artist Joan Miró in 1976. From close quarters, it seemed like a random spread of bold colors…black, blue, yellow and red, but from a distance, the abstract circular design seemed like the face of a pantomime artist, its jet black eyes following every move of every enraptured pedestrian.

There is something playful and easy about this mosaic, its amorphous amoebic shapes, geometric sharp lines and spots, sudden bursts of colours. Barcelona is thrilling…it has a street stamped archetypal Miró and our footsteps were stamped on his artwork now! How many trampling upon it every day even knew that it was a masterpiece? While backing up for a clearer picture, I almost bumped into a pillar…no, a statue. Vikas called out to caution me. It was a gold-painted human statue of Mozart!! We would have both tumbled and fallen…how embarrassing that would have been! Mozart didn’t bat an eyelid, though.

The last section, Rambla de Mar (The Rambla of the sea, added in 1992) is the walkway out to the Maremagnum shopping center. Next to the Maremagnum mall, was the Barcelona aquarium, one of the biggest in Europe. Laze at the harbour front, soak in the calming views of the flapping sails on the docked boats, have an ice-cream, daydream, or give your legs some rest.

It’s a 1.2 kms slow trek back through the frenzy-filled, fun street that only Barcelona can boast of. This time, take crazy pictures with all those weirdos. Decode their magic tricks. Find those hidden aces. Clap for the musicians. Shake a leg with the dancers. Laugh, giggle, stare, wonder…bring out the child in you.

78 thoughts on “Insanely amazing free street performances, all in a day”