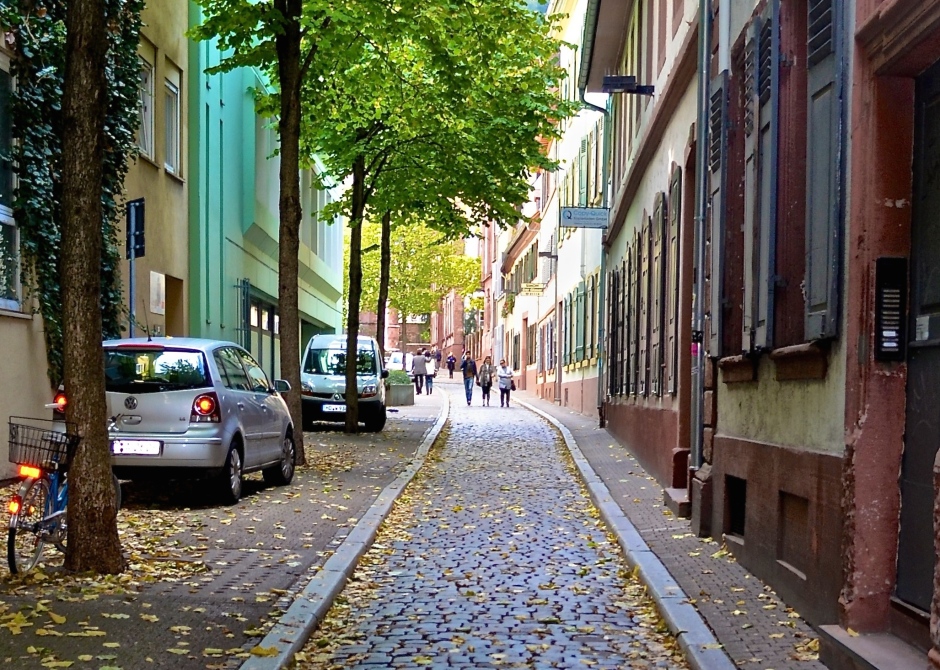 From the pulsating historical center of Heidelberg, follow the throngs to the right of Ritter Hotel, to face the other big draw of the town…the mile-long Hauptstrasse. Here, cobblestone streets and 18th-century buildings stand testimony to a history stretching back 600,000 years…if you count the fossilized jawbone of the Heidelberg Man. But stay in the present for now and trace the seemingly endless spine of the old town. Local bookstores, pretty boutiques, charming souvenir shops and commercial fashion houses…there’s a lot to absorb at every inch, so keep those eyes peeled all the way.

Wander into a side street and uncover a hidden gem early on…the Jesuitenkirche (Jesuit church). The elegant 18th-century structure looms large despite being enclosed by buildings in a small crowded space. Gawk at the surprising interiors…pristine all-white walls, gold paint borders on columns, a simple pink marble altar, delicate chandeliers and biblical frescoes. Listen to the sounds of silence from the rows of the dark benches. Allow the temptation of a few pictures and a few moments of admiration before you get on your way. 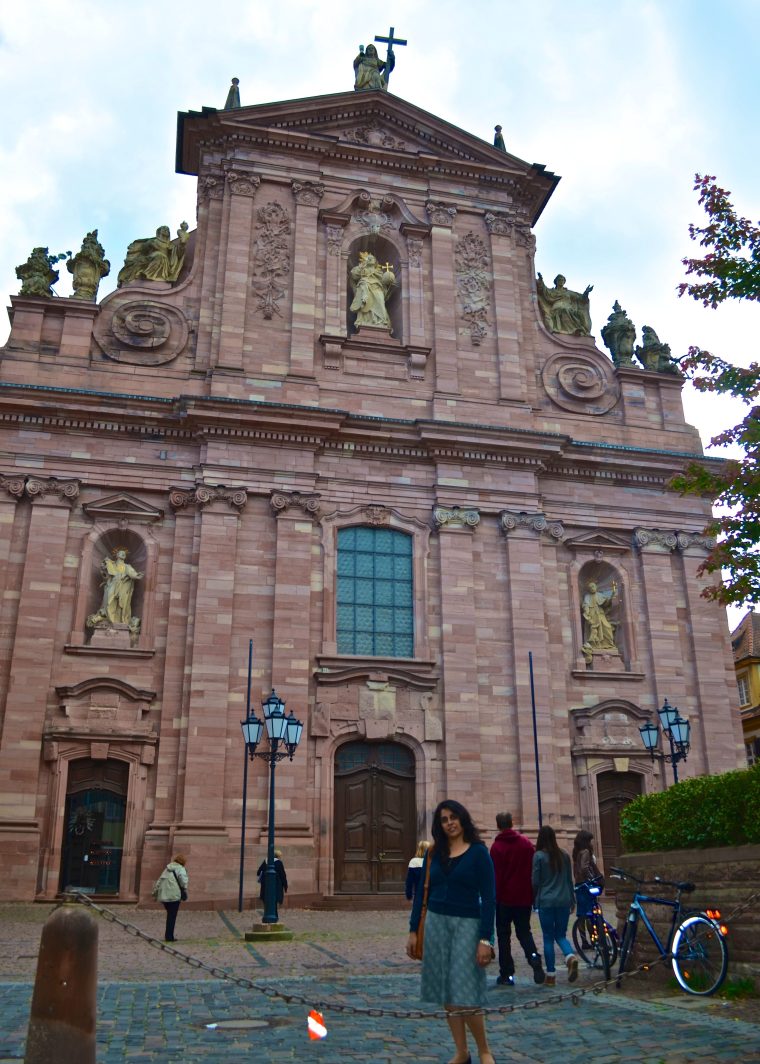 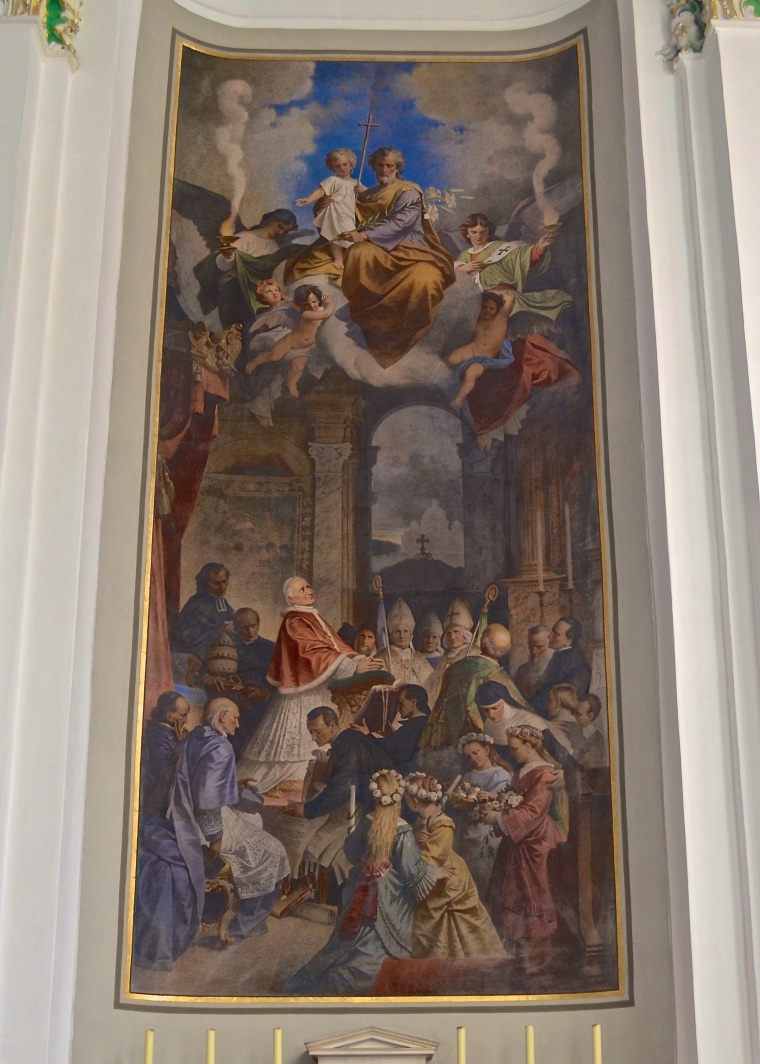 Never too early to indulge your appetite. Feel your stomach grumble along the row of tiny tables outside atmospheric German taverns. The aroma of bratwurst is in the air. Sausage, sauerkraut, schnitzel and crispy pig knuckles are the obvious lunch options. Give in! Or something more unexpected…an Arabian meal of succulent chicken, lamb and veal minced kababs with hummus, ending with baklava? Looking to satisfy post-meal sweet cravings? A delicious, delicate flakey phyllo pastry filled with apples flavoured with sugar, cinnamon, raisins and breadcrumbs, served warm in slices sprinkled with powdered or icing sugar then. Divine apfelstrudels (apple strudel) are everywhere!

More sweetness on your mind? Locate Cafe Knosel near the University Square and delve into its fun history. Back in 1863, the owner Fridolin Knösel had created a chocolate recipe called the Student’s Kiss for students to discretely communicate their romantic feelings to young ladies. It remains a charming souvenir of Heidelberg till today. Some young lad may have been imprisoned for wooing a lady with Knosel’s chocolate…that wouldn’t have been so sweet. Venture a taste! 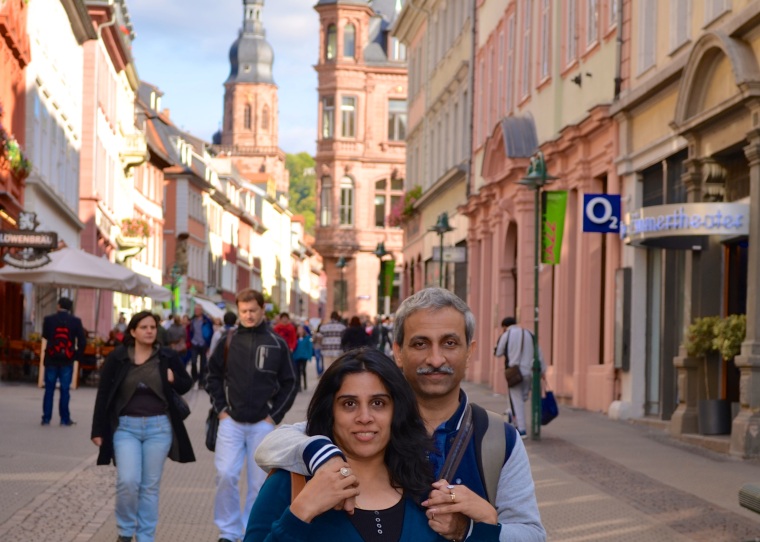 At the corner of Grabbengasse, observe the lively window display of the pink building where the famous Christmas decorations store, Kathe Wohlfahrt is housed. Imagine the spectacle during Christmas with all the Santa figures, dangling fairies, hanging ornaments and sparkling lights! Attracted by the complicated variety of cuckoo clocks? Step inside. So many different styles to choose from: mechanical and quartz, from the traditional cuckoo bird to fairy tales, beer drinkers, wood choppers, jumping deer, and even an angry, fighting couple. What an astounding level of engineering packed into these charming timepieces that have stood the test of time!

At UniversityStrasse, come face-to-face with the oldest German university from the 1300s. This red sandstone building with its curved facade, turrets, steeples and a clock tower rising above its curving roof is where Martin Luther once defended his thesis. Its modest dignity is somehow heightened by the row of bicycles leaning against its outside walls. Think about the 30,000 students studying behind these hallowed halls…working part-time for their fees in nearby cafes and stores of the University Town of Heidelberg. But Jack works and Jack plays…students will be students. So pranks, drunken incidents and other such minor transgressions have only added to the colourful legacy of the University. Until 1914, the University even had a prison where errant students did time and kept themselves busy by scribbling paintings, graffiti, poetry, fraternity symbols and portraits on cell walls after returning from classes. Nearby is Peterskirche (St Peters Church), the oldest church in the city. Outside the church, in an old cemetery, illustrious citizens and learned professors used to be buried and some tombstones are over five centuries old. Touch the ancient oak tree planted in 1883 on the 400th birthday of Martin Luther. Doesn’t it feel strangely secure? 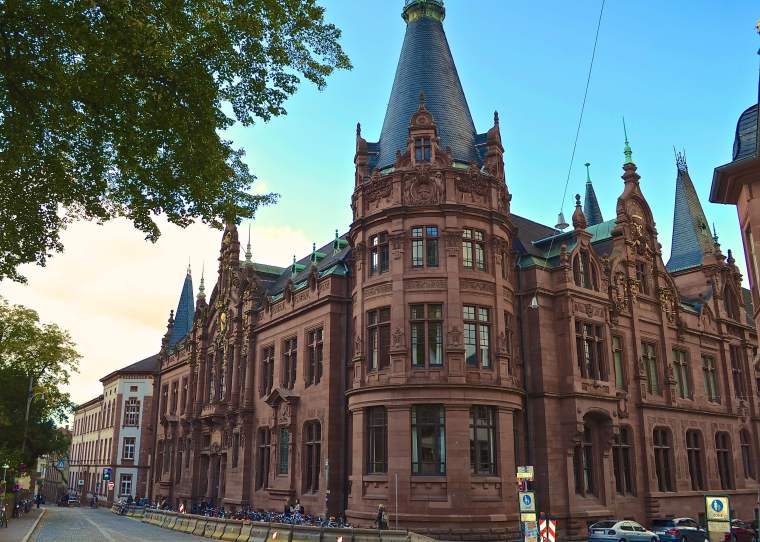 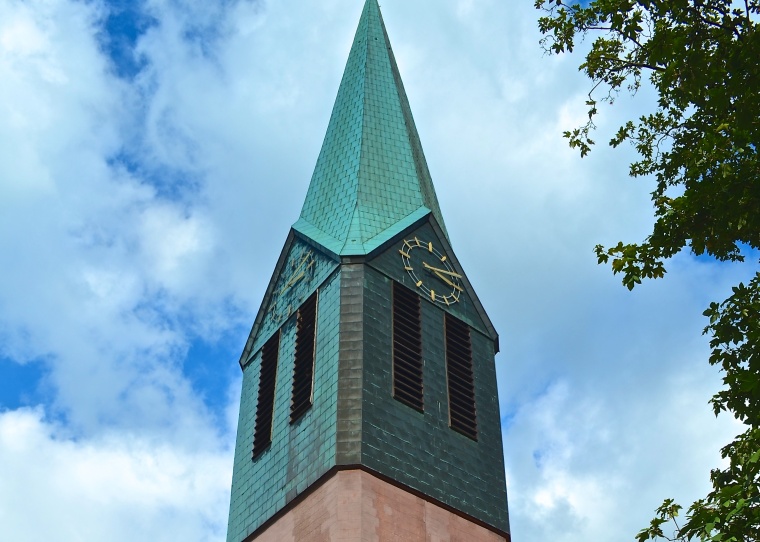 Midway through Haupstrasse, turn to face the direction of the Alstadt behind you and see the Heiliggeistkirche towering above the cluster of gabled roofs, like a lighthouse on the open seas. Tree-shaded lanes run towards the river on one side and the castle hill on the other. Explore in as many directions as your curiosity allows. Sit by a hidden fountain in a back alley and hum with its tinkle. Prowl into the delightful back courtyard of a restaurant and dissolve into the solitude. Side-step the carpet of rust-gold autumn leaves scattered on edges of a bylane and memorise the red-gold colour palette. Cars are parked neatly along the pavement. A student with a backpack rides past on her cycle. In an apartment above, a man shuts a louvred window softly. Bask in the beauty and serenity of the everyday. When you’re ready for the buzz again, continue along Haupstrasse all the way till Bismarckplatz, where a mini Times Square awaits. It’s going to be a long walk back to Marktplatz through one of the longest pedestrian streets in Europe. 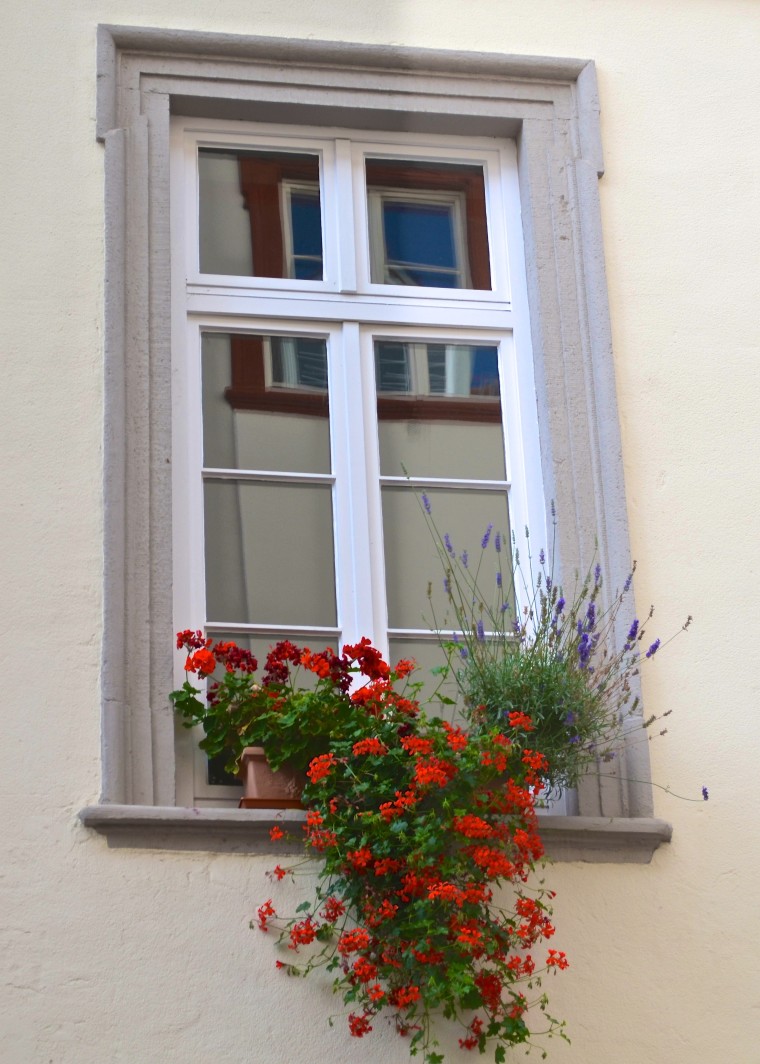 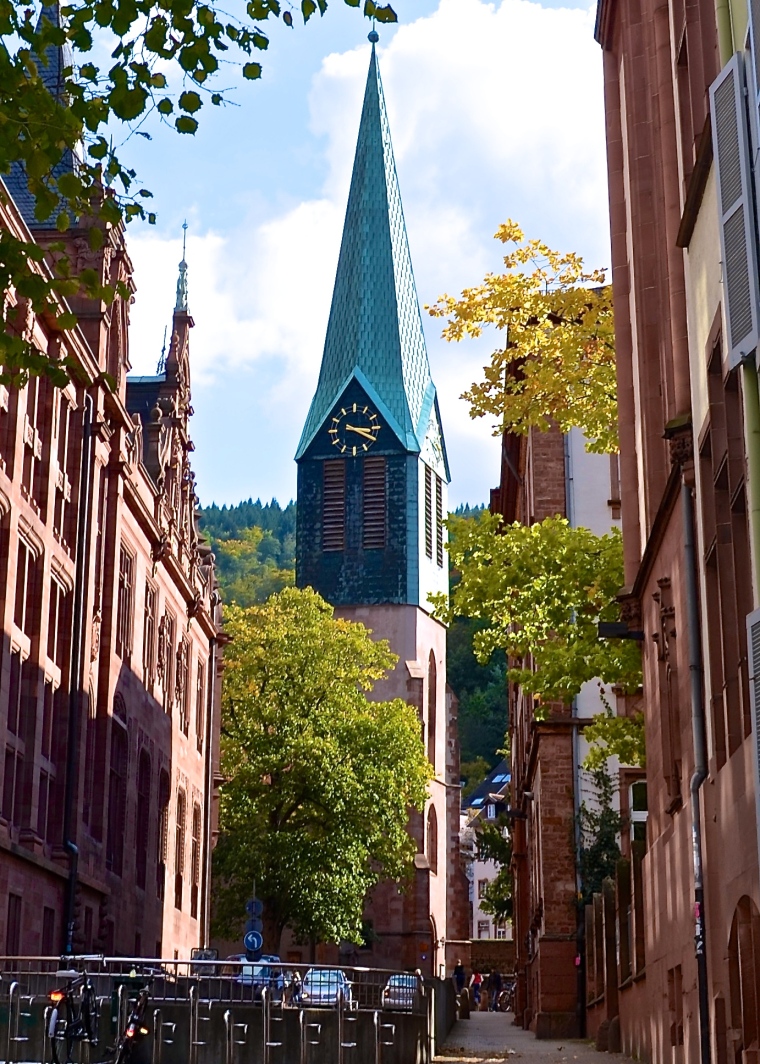 Wrap it up by the river

Process the day at the impressive Old Bridge (Alte Brücke) spanning the river Neckar. In the Middle Ages, its arched gateway would have been the entrance to the ramparts of the Old Town. Today, though the original wood structures have been destroyed, the 18-century stone structure and the cylindrical Baroque-style tower helmets are remarkably well preserved. Cross over to the opposite side of the river, and gaze at the magnificent sight. Soft golden lights cast magic on the medieval arches of the bridge, the illuminated crumbling facade of the castle stands tall high up on the hill, defying time and age and the nestling of quaint houses punctuated by church towers make for the most endearing image in all of Germany. Innumerable poets and artists of the Romantic Era found inspiration in this enchanting town. And you? 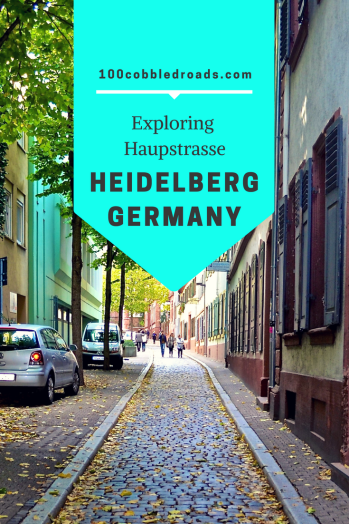