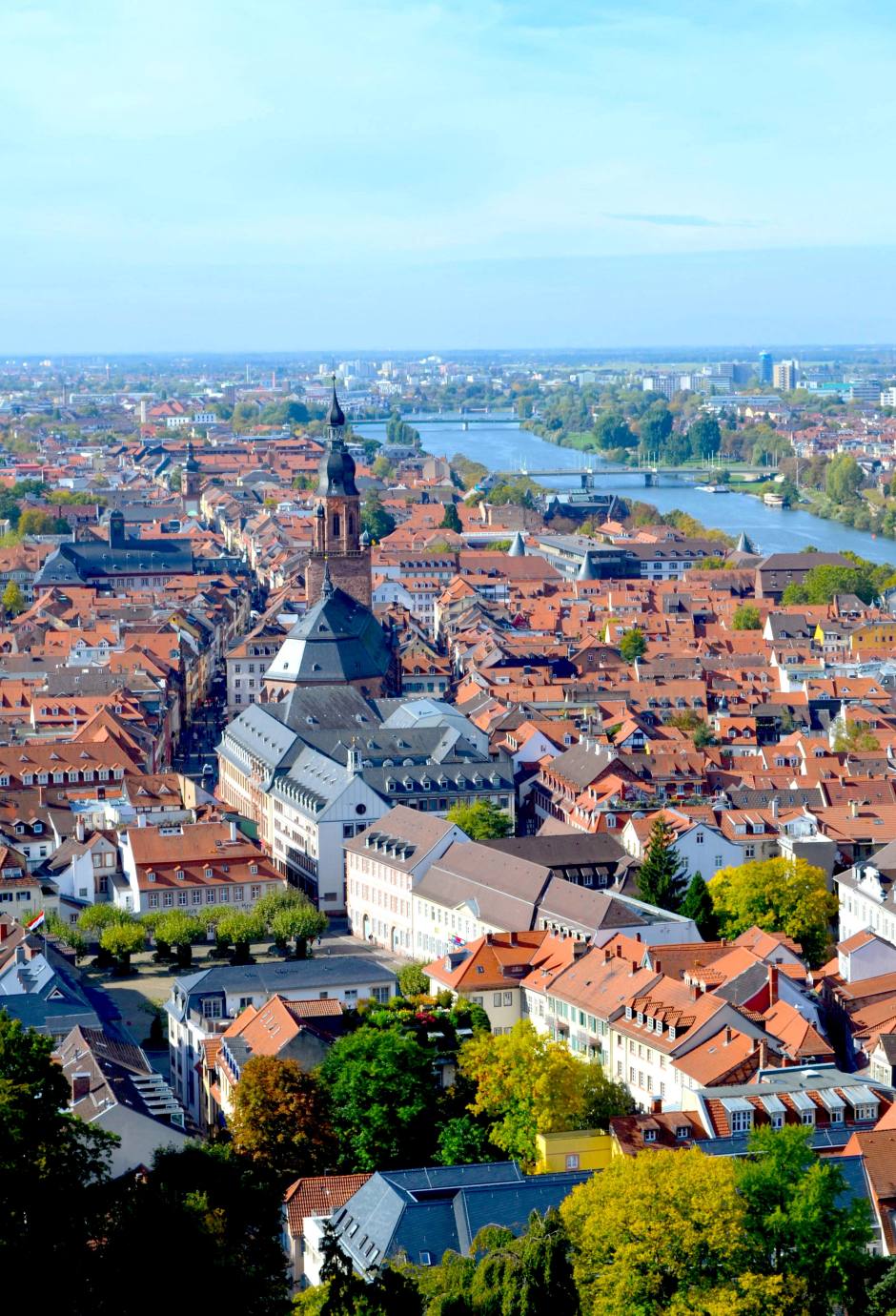 Located about 90km south of Frankfurt, is a pretty little town, lucky enough to escape destruction by air raids in World War II, and luckier to have over $125 million invested for further restoration. Heidelberg is one of the hottest destinations in Germany, visited by three million tourists every year. So, if you haven’t been there already, add it to your list. NOW! 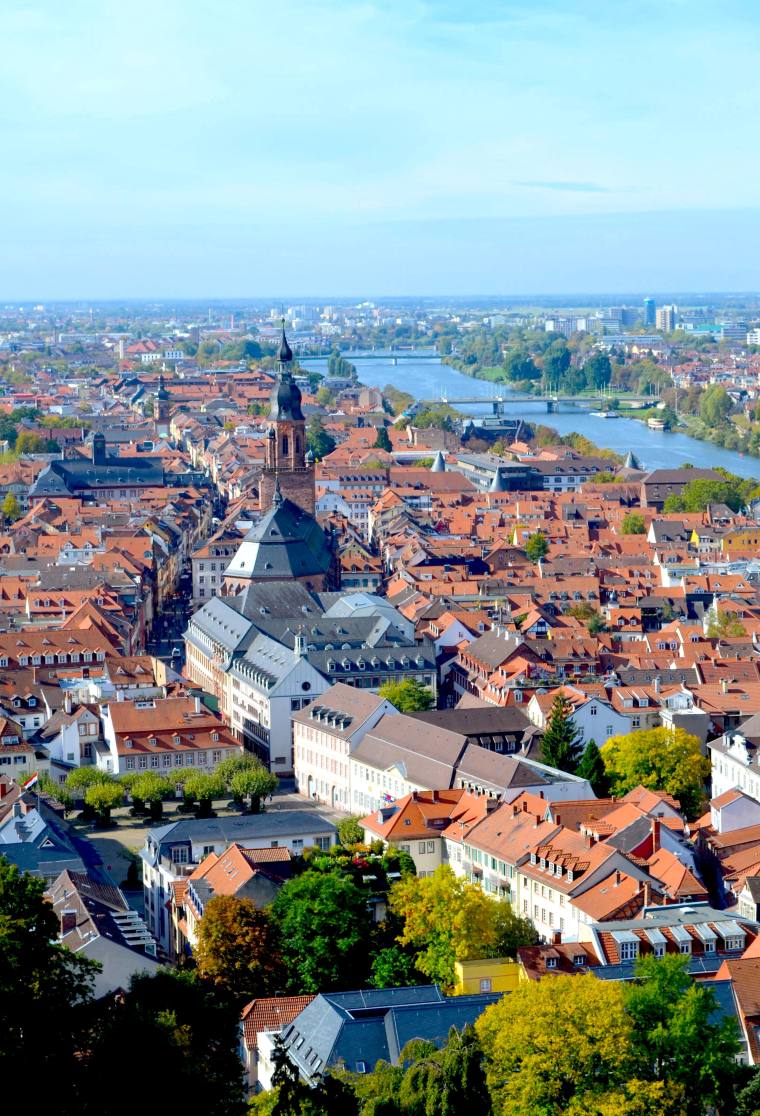 We took our first breathtaking view of the picture-perfect town from the impressive Old Bridge, (Alte Brücke) spanning the river Neckar. In the middle ages, its arched gateway would have been the entrance to the ramparts of the Old Town. Today, though the original wood structures have been destroyed, the stone structure from the 18th century and the cylindrical Baroque-style tower helmets are still remarkably well preserved.

Crossing over to the opposite side of the river, we surveyed the magnificent sight…the medieval arches of the bridge, the crumbling facade of a castle standing tall high up on the hill, defying time and age, and the nestling of quaint houses punctuated by church towers. The most endearing image in all of Germany. River cruises slid silently past with tourists scanning the enchanting town, which had inspired innumerable poets and artists of the Romantic Era. It was here that Schumann’s pianist skills had bloomed and I could well understand why. Celebrated author Mark Twain once said: “I have never enjoyed a view which had such a serene and satisfying charm about it as this one gives.” I agreed…and even feel some kind of pride in the fact that I had shared a moment with Mark Twain. A moment separated by centuries, but a moment, nevertheless.

We had saved a leisurely half-day exclusively for the imposing Heidelberg castle. A few minutes walk from the left end of Marketplatz took us to the spacious and picturesque square of Kornmarkt. Beyond the central statue of Madonna and baby Jesus, enticing us from atop Heidelberg’s local mountain, the King’s Chair (Konigstuhl) was the fairytale Heidelberg Castle and palace. The Bergbahn, a 100-year plus old funicular cable rail system whisked us up in a flash.

We took our time to gloat over the massive complex, containing the broken remains of the Gothic-Renaissance castle. This had been the glittering residence of the Palatinate prince electors of the Wittelsbach family for five centuries. At the tourist centre where we picked up our audio guides, posters announced various historical tours and music festivals. The royal family would certainly have not taken kindly to unwanted visitors…but in the interest of cultural preservation, tourism is a necessary evil. 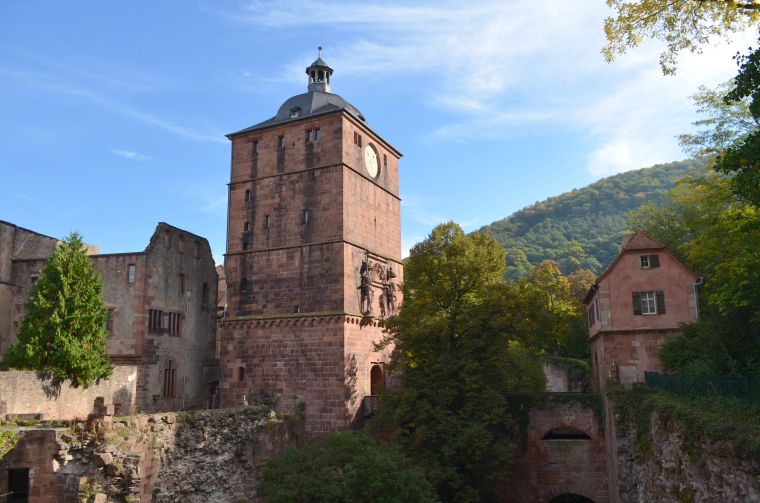 Our exploration began at the main entrance of the castle into the former gunpark, later converted by Prince Elector Frederic V into a pleasure garden for his wife Princess Elizabeth Stuart. The rambling ensemble of well- preserved, crumbling ruins overgrown with ivy, collapsed walls and gaping towers silently recounted past conflicts. Through dozens of glassless windows of a stand-alone brick wall, the sky made simple yet brilliant blue portraits. 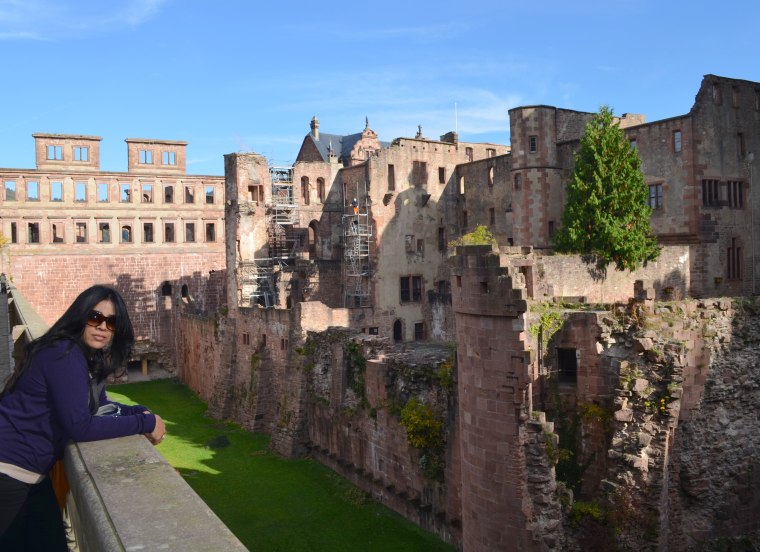 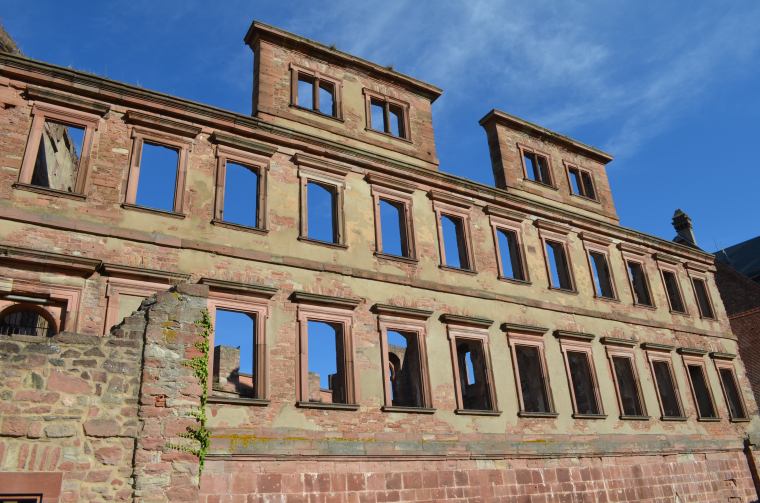 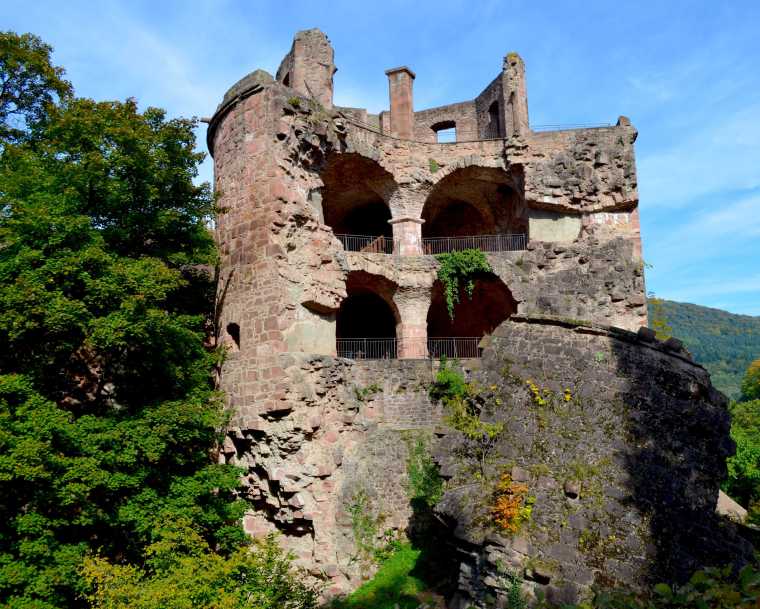 I let my thoughts run back to when the castle was bombed into oblivion in 1693 during the Nine Years War…it must have have been like 9/11! Surprisingly, the large inner courtyards and two magnificent palaces still project bygone wealth, power and sophistication. The resplendent sculptures of Roman gods and goddesses, decorative baroque elements and grandiose statues of Holy Roman emperors are in extremely good shape. 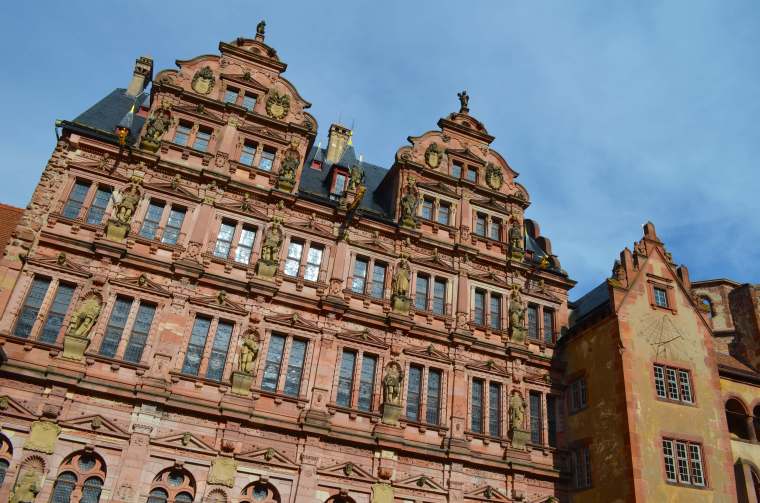 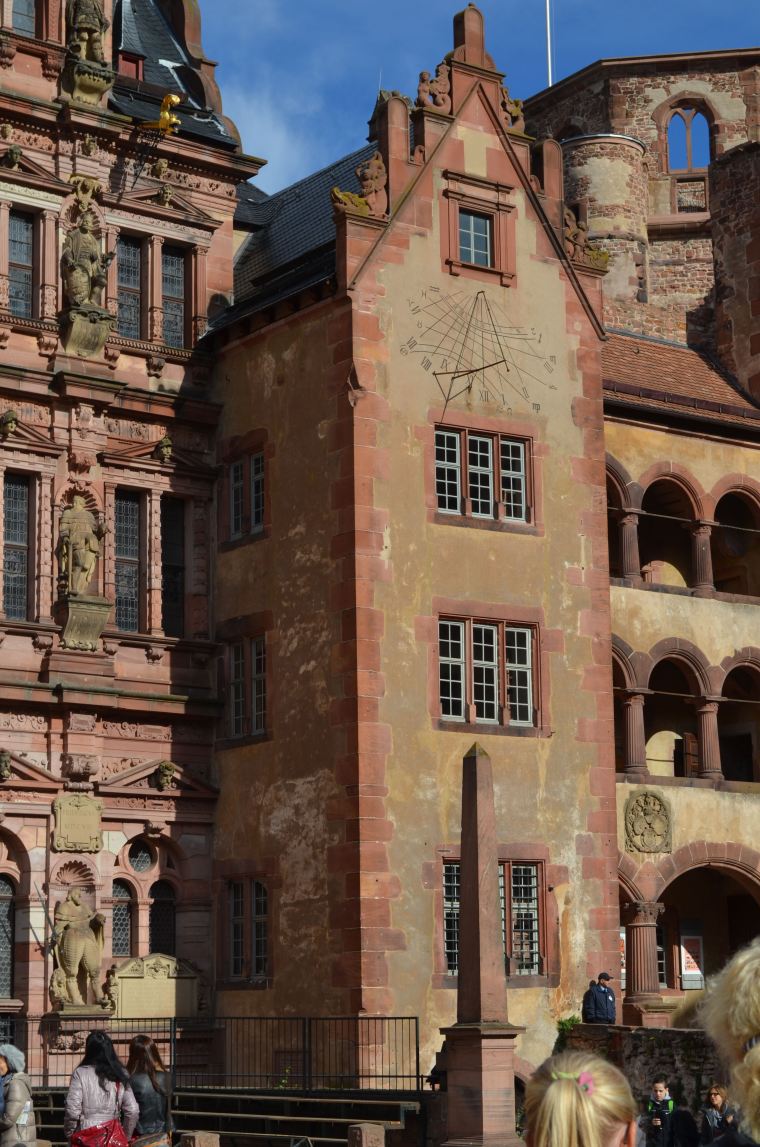 We located the palace cellar housing the famous Heidelberg Tun, a whopper of a barrel, the largest in the world to have ever been filled with wine, with a capacity of 220,017 litres (58,124 gallons). Stairs lead up both sides to the small balustraded dance floor on top. I struck a pose with the plaque of Perkeo the dwarf on the opposite wall, thinking about the cellar master and court jester who drank 18 bottles of wine daily and apparently died from being tricked into drinking a glass of water. Hilarious! 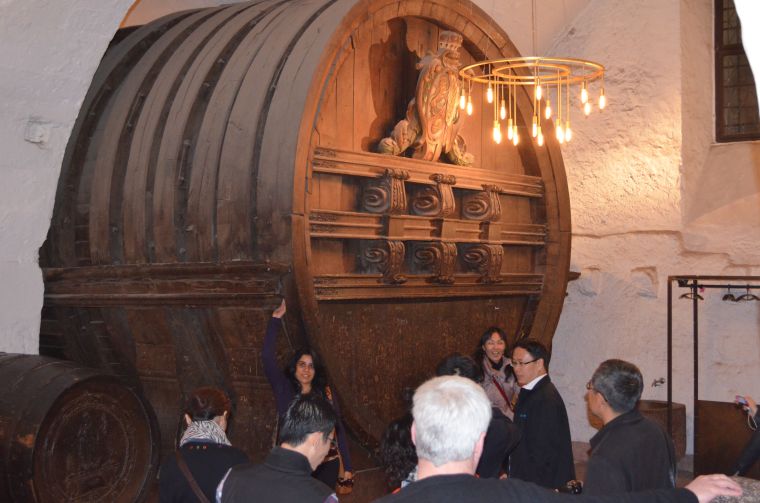 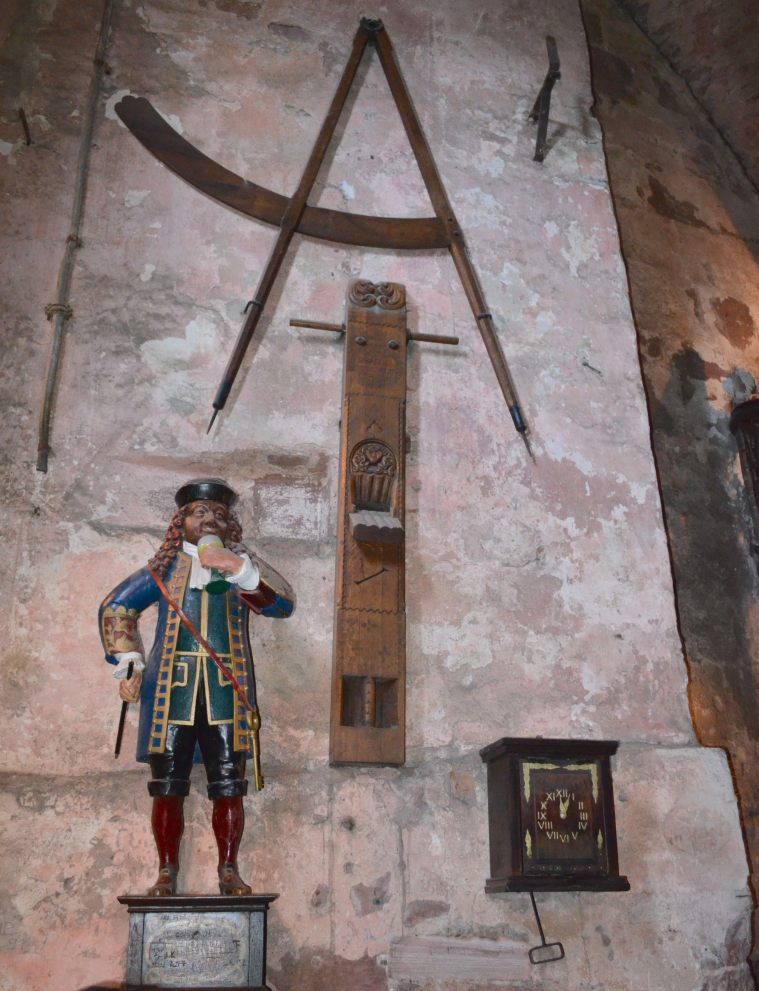 Outside, vast manicured gardens stretched out in the distance and huge shapely trees punctuated the green vision of perfection. We meandered along the seemingly unending walking paths…the serenity was overwhelming. I felt the desire to lie down on the grass under a shady tree and write a poem. A lone crow cawed from somewhere. A lady passed us from the opposite direction, rolling a pram covered with a plastic rain jacket…in the distance, a man relaxed on a bench, his head buried in a book…locals savouring a lazy morning in the multi-terraced pleasure gardens.

‘Hortus Palatinus’, was one of the eight wonders of the world of the time, which were never completed. The remaining vestiges of the landscaped terraces, grottoes and fountains built into the hillside hint at the awe-inspiring scale of this earthly paradise. We halted at the bust of the German national hero, Goethe…that brilliant man, Jack of all trades, master of all…equally adept at poetry, writing and works of science and philosophy. I had a vision of him, composing and reciting some of his finest romantic poems to his pretty lady-friend, somewhere nearby under the azure skies.

At the first sightseeing terrace on the left side, we stared silently at the stunning vista of the baroque Old City with its cluster of red roof houses and the towers and slate grey pointy dome of the Heiliggeistkirche standing proudly. Ahead, the languorous Neckar and the Alte Brucke. Behind us, the ruins of Heidelberg Castle. And all around, the mountains, forests, vineyards of the Rhine valley. This was poetic Germany. And I had a verse in mind! 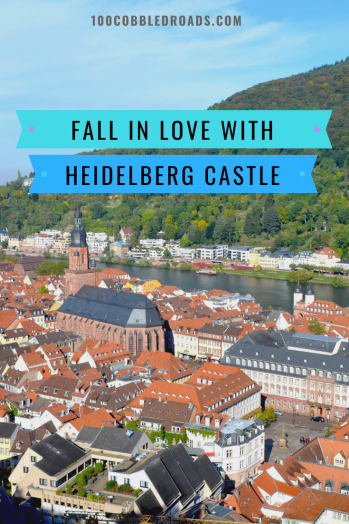 100 thoughts on “Why Heidelberg castle will make you fall in love?”