The common denominating factor binding ancient civilisations of Egyptians, Mayans, Greeks, Romans, Chinese and Indians? Temples! But beyond the structural ingenuity and fine craftsmanship of temple architecture lies a deeper science (read common blueprint) alien to the amateur eye. Especially in Hindu temples…where astronomy, astrology, mathematics and metaphysics come together in an enigmatic formula. Know one and you will know all. Ready to break the code?

Its a baffling array of choices across the Indian sub-continent, so go easy on yourself and pick a region first. Recommendation? The west coast, specifically Gujarat…culturally and architecturally the richest, thanks to a spate of foreign invasions. Fine tuning then. Seek authentic Indian, pre-Mughal. Zoom in on the Solanki period for the most outstanding specimens of Indo-Aryan architecture. The object of affection? Sun Temple of Modhera, an 11th-century creation of Solanki King Bhimdev of the Patan empire. Sun-worshipper? But of course!

Coming to name etymology…Modhera is said to named after the Modh community of Brahmins who helped Lord Rama perform a yagna here. Or would you would rather believe the eerie theory that Modhera translates to ‘mound of the dead’ (multiple layers of civilization)? The Sun Temple of Modhera is a two hours (100km) drive from Gujarat’s capital city, Ahmedabad. Easy-peasy. As far as sun temples go, this one is as good as it gets. Much more impressive than its celebrity counterpart at Konark…and two centuries senior too. Archetypal Solanki, right from the intricately carved stone material to all the structural elements. A time-weathered golden brown stone edifice to stun you into a wide-eyed silence, numb you into a zombie-like stupor. But senses on full alert…tons of decoding ahead! 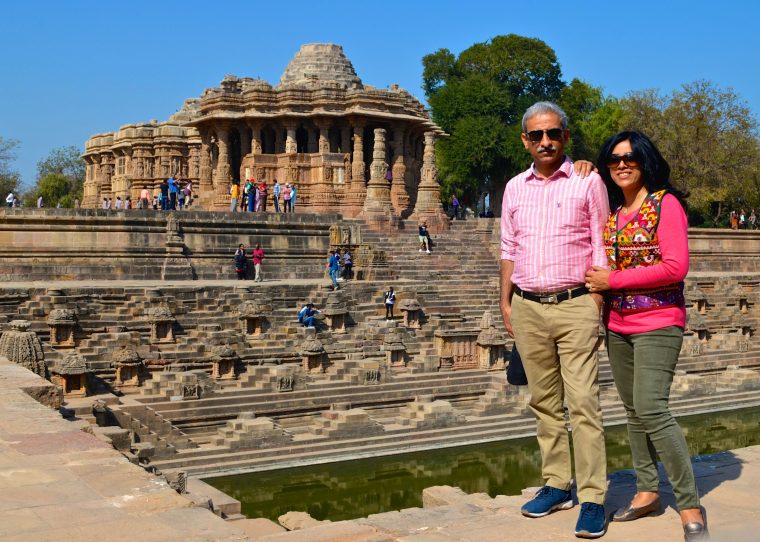 First things first. It all about a sweet spot…banks of a waterbody, a hilltop, a verdant valley or a green grove, even an island…any icon of earthly paradise. Preferred direction? Always east facing or east to west. To face the rising sun. Isn’t it obvious?

So, here’s how Modhera, being a sun temple, fits the mould. For starters, the main entrance of the temple faces east. But there’s more. It sits right on the Tropic of Cancer that passes through India. Lost? Ok, this is how it pans out. On the days of equinoxes, the Tropic of Cancer receives the strongest, direct rays of the sun. Wait, it gets better. The temple is built in a away that the sunlight travels through the entrance arches at such an angle that it hits the main idol in the dark inner shrine far inside, illuminating it with the power of a thousand lightbulbs. 11th-century genius without support of modern astronomical gadgets. Modhera’s homage to the sun continues through the inverted lotus plinth design. Hint: lotus blooms only in the sun. Head nod?

Pray, worship, serve. Right. But did you know that in its purest sense, the Hindu temple is more than just an abode for the Gods? In the past, it was literally the fulcrum of intellectual, social and artistic life. Part museum, part congregation hall, part learning institution for the community…practically a centre for all-round personal growth. Impressed? That’s not all. As a symbol of the universe, the temple reflected all cosmic elements celebrated in Hinduism, including fire (lighting of oil lamps), water (sprinkled for purity) nature, deities and human life cycle (depicted through sculptures) eternal nothingness (signified by empty space in the shrine) and universality (use of repetitive patterns).

Modhera is no exception to the rule. Get close enough and each stone, each engraving, each pillar, each ledge will start a conversation. Algorithms will emerge from each inch of the marvellous monument. Study the innumerable stone carvings of exquisite celestial beauties, rejoicing figures, rows of elephants and processions of people celebrating life in all its phases, including birth, war, and death. Discover the nuances trapped in the captivating details…12 different Sun idols for 12 months and 52 intricately carved pillars for each week of the solar year. Look out for repetitive, never-ending themes. Towers surrounded by smaller towers, surrounded by still smaller towers for eight or more levels, each part a miniature image of the whole. Observe the geometric patten leading to the massive Surya Kund (stepwell). Consider its symbolism…every part of the cosmos contains all information about the whole cosmos. Reflect on the mountain-like pyramid-shape of the temple’s Shikhar (spire)…an upward movement towards enlightenment? Cross-eyed, no more. 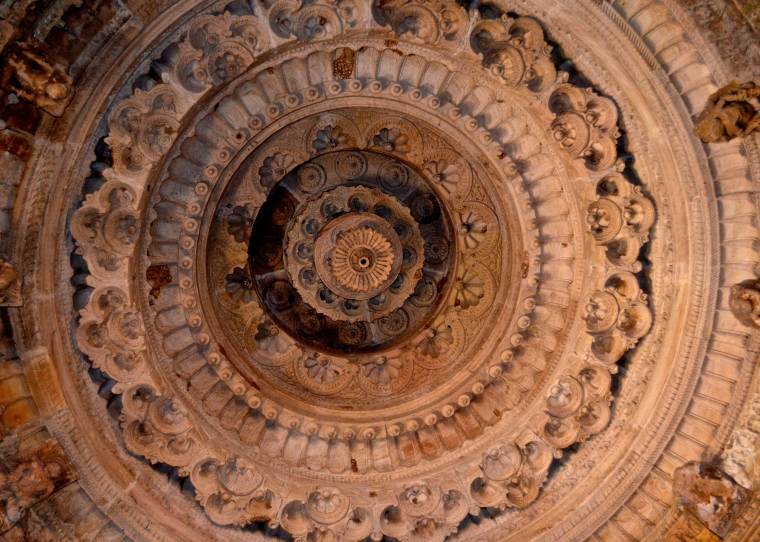 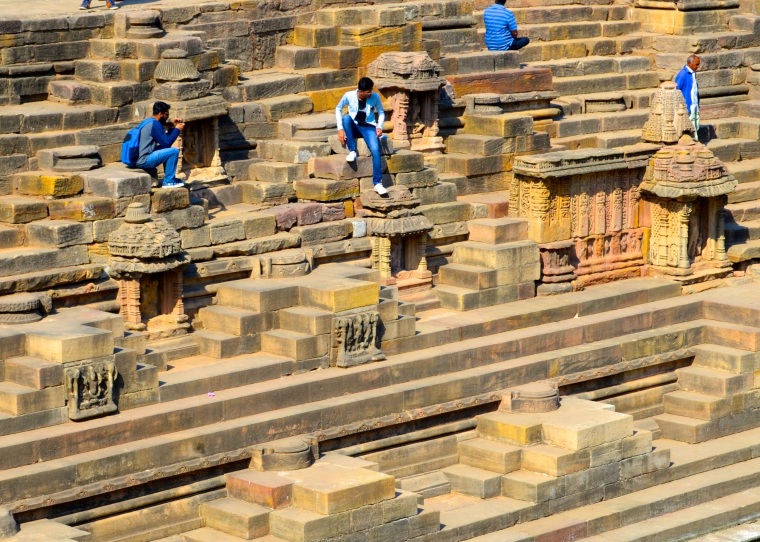 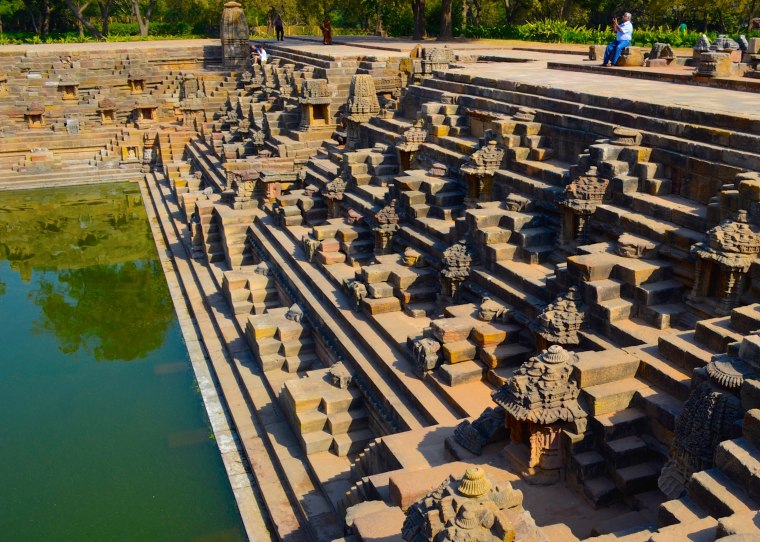 Whims and fancies don’t stand a chance, considering that traditional Hindu architecture is based on Vastu Shastra (literally ‘science of architecture’) developed way back between 6,000 and 3,000 BC! A human figure sitting inside a square is used as the model for proportions, much like the 15th-century Vitruvian Man of Leonardo de Vinci. The Vastu-based building employs two shapes for design…squares (for order or space) and circles (for time/movement). Further, influence of sun, magnetic fields and gravitational forces are combined to syncing vibrations of individual with built spaces and the universe. Result? Spiritual strength, peace, bliss. No secret sauce, pure science!

Translate this into each of the three distinct parts of Modhera temple. The Surya Kund (stepwell for purification and salutation) is a perfect square. So is the ‘Garbhgriha’ (sanctum sanctorum that once housed the idol made of pure gold and diamonds. Ditto for the clockwise circumambulation path around the shrine and outer wall. On to each pillar and every portico…suits perfectly. What about the octagonal Sabha Mandap (congregation hall)? Look again, isn’t the octagon a variant of the square too? 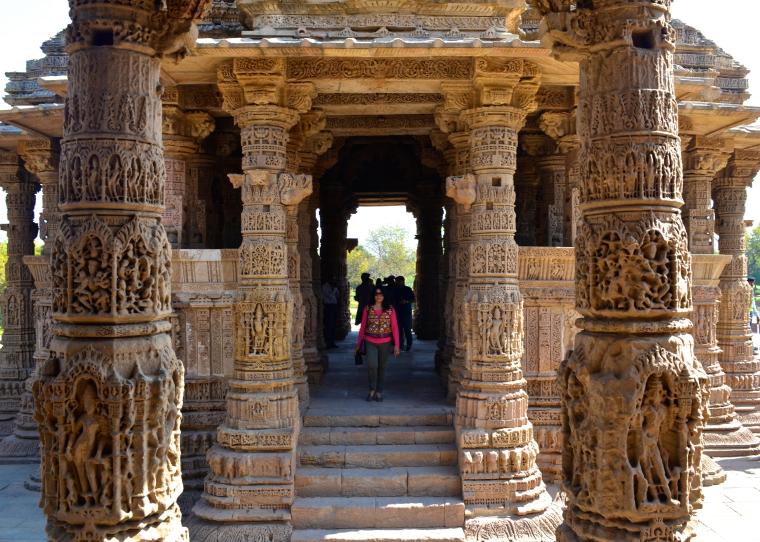 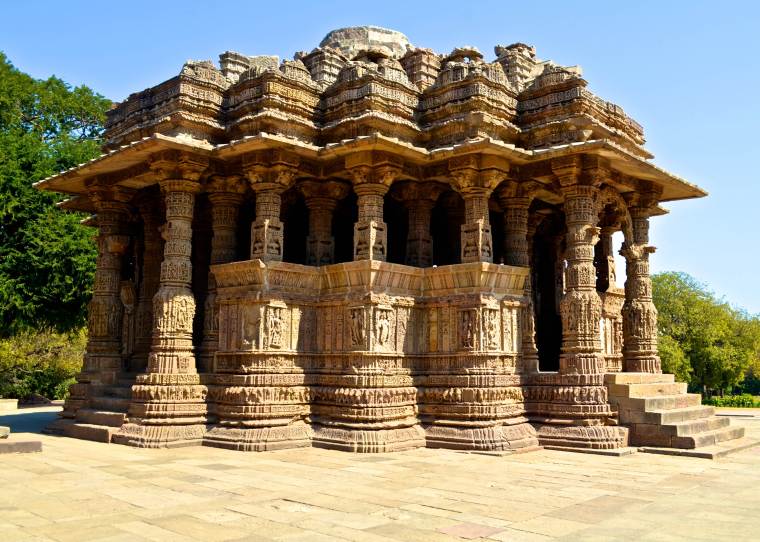 When you’re exhausted from all the heavy analytics, its time to soak in the full splendour of Modhera from an ideal vantage point. Not somewhere high up, but deep into the recesses of the earth. But where? Take the zigzag descent to the bottom of the Surya Kund from any of the four identical sides. Watch the light dance over the shimmering green water. Slip through the shadows of the shrines dedicated to the pantheon of gods. Take a position opposite the pillared portico of the temple and immerse in the stillness. The grandeur is as overwhelming as it is calming. The temple is the entire universe and you have melted into non-existence. Devotees once dipped into these waters before proceeding to the shrine above. Close your eyes and give into the vision…a deep bed of gold coins, a gold and diamond deity of the Sun God, and a brilliant equinox. Suddenly a pigeon flaps past. Ah…rude return to reality! 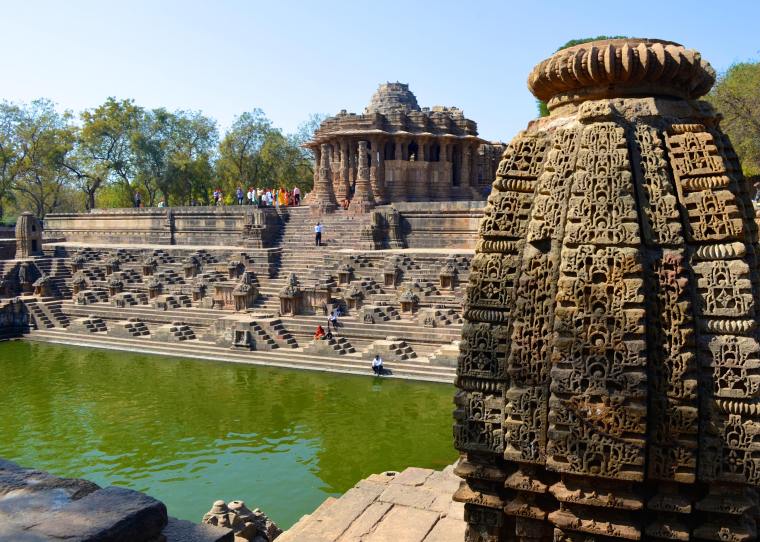 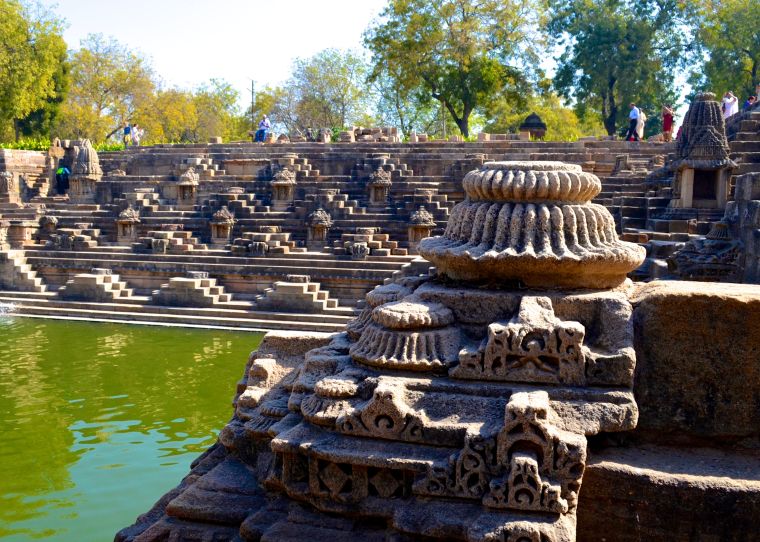 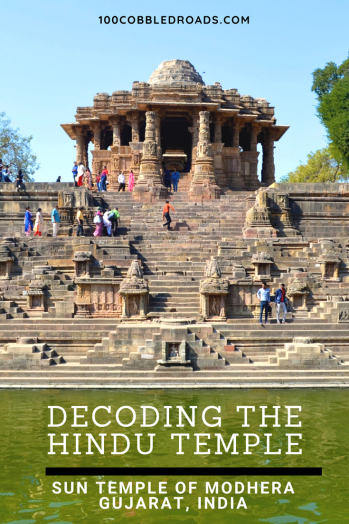 60 thoughts on “Why you need to decode the celebrated Sun Temple of Modhera?”