The 3-hour train ride from Vienna may prep you with enough eye-candy, but  that first view of Salzburg, Austria’s fourth-largest city…still a killer. Beyond a meditative river straddled by several bridges, lies a charming old town filled with splendid Baroque spires and domes, under the shadow of one of Europe’s largest medieval fortresses looming large on a gentle hill. Centuries ago, when the Salzach river was an important salt transportation route, butchers and other food processors would unceremoniously dump wastes into it flowing waters. And look now…the entire city is precious UNESCO heritage. River shaming to Love Lock Bridge…that’s some serious headway! Navigating the compact 65-square kilometre town could take you a few hours to a few days, depending on how deep your heart wills you to dig. So, here’s my choice of the most picturesque areas you need to see in this delightful destination synonymous with that evergreen musical from the yesteryears, ‘Sound of Music’. (Read my post on the ‘Sound of Music’ tour experience). 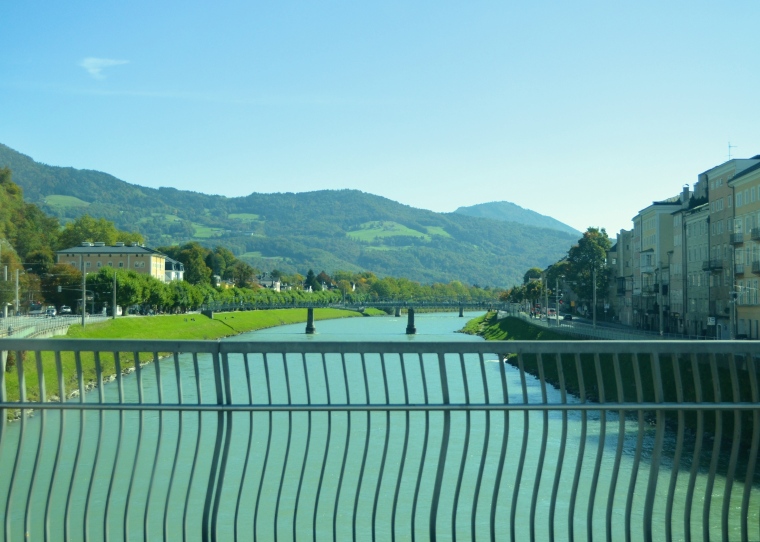 Intricate ornate wrought guild signs from the 1400s, jut out from doorways of restaurants, shops and workshops. More than anything else, the street is a artistic, colourful medley of dainty patterns, flowers, curving tendrils, animals, stars, birds and much more. Even high-street fashion brands fall in line with carved, elaborate ironwork signs advertising their wares. Potter around the open stalls and booths under large umbrellas. Pick up a some local bric-a-brac, a cheerful-looking puppet or some dried flower ornaments to brighten your kitchen shelf. Lunch at atmospheric trattoria in a hidden courtyard…inevitable, utterly romantic and unforgettable. 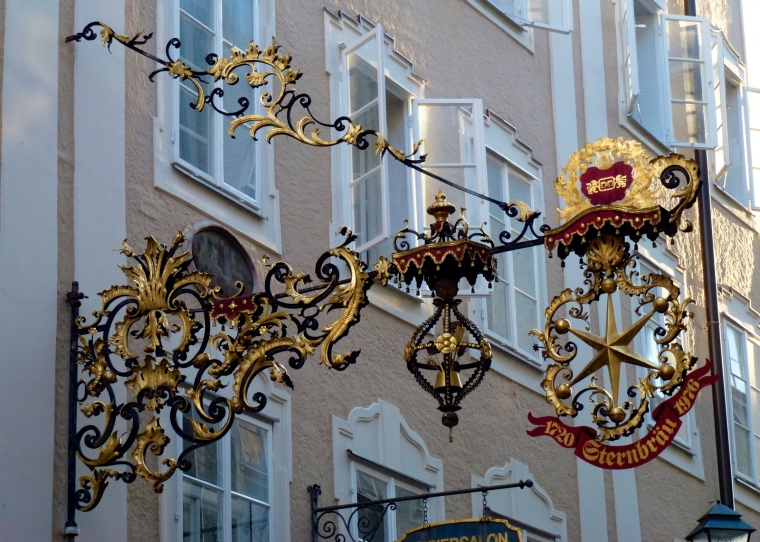 In the footsteps of millions of other die-hard classical music fans, visit the cramped Geburtshaus apartment, Mozart’s Birthplace in the Old Town, where he learned to play piano and violin and composed his first boy-genius works. House No. 9, now Mozart Museum is distinctive…a canary yellow facade and glass windows with broad white borders reflecting the clear blue sky. Exhibits include historic instruments like his childhood violin, clavichord and harpsichord, documents and letters from the family, memorabilia and many portraits. Contemplate the legend of the musical prodigy, an incredibly skilled pianist at age three, who was dragged across Europe by his father to perform for empresses and kings for 10 long years…(a third of his entire life, since he died at 35). How ironic that the musician who made hearts pound, turned cheeks pink, and inspired people to life large, himself had such a melancholic life!

Outside, in a corner of the sun-washed Mozartplatz, an elderly man works his hands melodiously on a much-loved old accordion. Posters announce church concerts at store windows. You can feel that classical music is everywhere…it flows like blood in the veins of this town, much like art on the streets of Florence. The first Salzburg Festival of 1920 that made the Salzburg a fashionable place continues to make waves worldwide. But it all started with the genius of artists like Wolfgang Amadeus Mozart. His wigged face and red costume are stamped all over town…on ‘Mozartkugeln’ chocolates, ‘Mostly Mozart’ festival posters and hundreds of souvenirs including CDs, books, T-shirts, stationery, pads, posters, coins and postcards. Can you resist taking a playful memory back with you?

Allow yourself sinful temptations at AlterMarkt

AlterMarkt (old market) square appears cordoned off by the row of stately burgher houses in pink, peach, soft green and mocha cream. The central St. Florian fountain is enclosed behind a fence of decorative metalwork depicting horseback riders, animals, plants and coats of arms. The large marble basin around the fountain has a statue of patron saint St Florian atop a pillar. In older days, residents actually believed he would save them from fire! Fire to fountain…makes sense. The ancient dairy, herb and vegetables market is long gone, but up ahead, at the lovely open-air flower stalls, people still get attracted to other kinds of colours and fragrances instead. 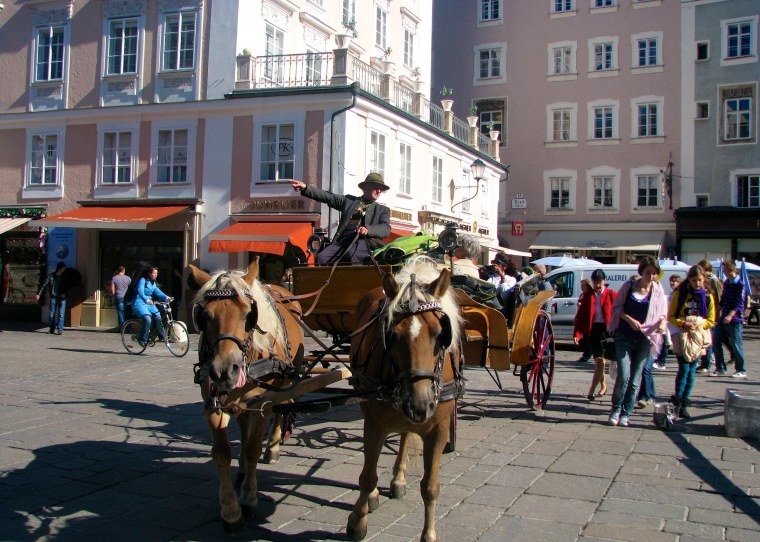 When it comes to picturesque areas in Salzburg, temptations are never far away. You’re drawn towards the beautiful Rococo façade of the  ‘Fürsterzbischöfliche Apotheke’, the former court pharmacy, now the main outlet of chocolatier ‘Fürst’, the inventor of the famed Mozartkugel. Austria’s iconic chocolate treat is still hand-made, hand-wrapped and hand-sold at this store. 31 euro for 25 pieces is certainly not affordable, but which indulgence is? Browsing through the luscious assorted chocolates and truffle specialities will stoke your hunger and tingle your sweet tooth. An inspired stop at the legendary Cafe Tomaselli is  predestined, (read another of my posts here), so save yourself the trouble of indecision. Just give in!

Sink into the past at Sigmund Haffner Gasse

Trace your steps along the enchanting Sigmund Haffner Gasse, one of Salzburg’s oldest streets dating back to 1140. Gaze at the black painted water pipes dropping vertically from all the way from the roofs of the six-storied apartment buildings lining both sides. Cleverly and unobtrusively, their thick bold lines demarcate the subtle colours of the buildings. Between the snazzy boutiques and elegant restaurants on their ground floors, spot the 700-year old Elefant Hotel. Its beautiful black-and-gold wrought floral design iron signboard with the elephant illustration makes an arresting statement. And when you turn back to survey the length of the street behind, the rococo facade of the Old Town Hall’s clock tower gleams in pristine-white with its yellow-orange dial and green topped bell tower, watching you silently, until you disappear from its gaze at the next corner. At Buchhandlung Hollrigl, the oldest bookshop in Austria dating back to 1492, bury yourself in the treasure trove of rare books, maps, music sheets, paper napkins, stationery. If nothing else, pick up some very interesting postcards. 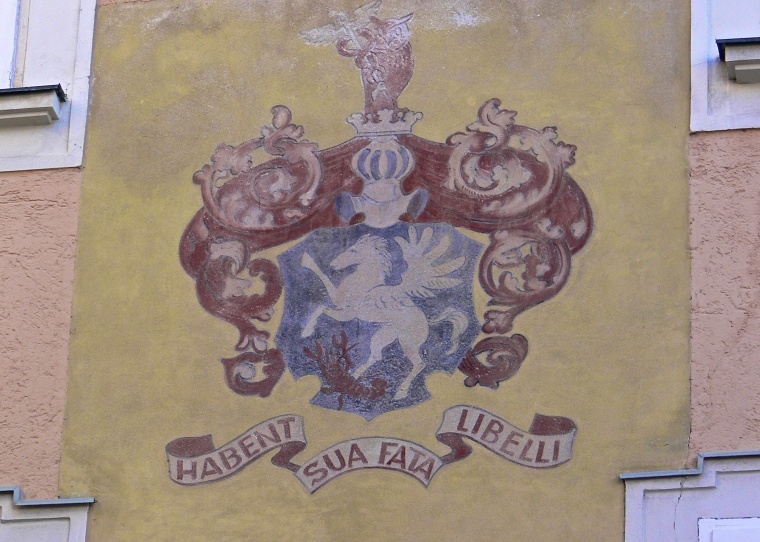 When the day ends and you’re savouring a meal of delectable salmon trout at a cozy outdoor table of a small Salzburg tavern, digest this. You’re occupying two square feet of space in a city discovered by Romans way back in 15 BC! Salzburg’s modesty belies its stature as the oldest and most significant spiritual and cultural centre of Austria. Would you disagree?

(To be continued in Part 2 next week) 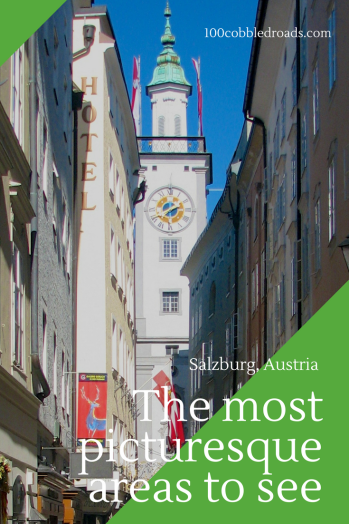 51 thoughts on “The most picturesque areas in Salzburg you need to see!”