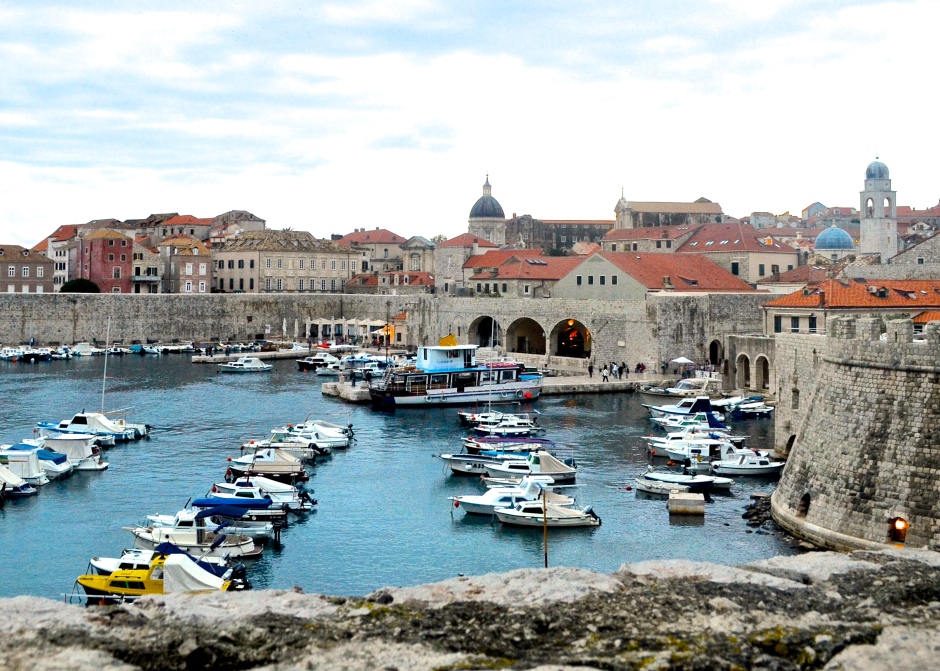 Insta-worthy Dubrovnik beyond the wall walk…

Entering the walled city of Dubrovnik through the impressive 13th century Pile Gate, four doors, two walkway bridges and a wooden drawbridge, remind yourself that Napoleon’s French army once stomped through this path with destructive, harmful intent. Shivers up your spine?

You can see the broad limestone-paved promenade ahead, gleaming like polished marble under millions of footsteps. Can you believe that 300 meters of the Stradun (or ‘large street’ as christened by the Venetians), used to be a swampy channel till the 11th century, separating two settlements of Laus and Dubrava, which were later integrated and city walls built around them? Even from a distance, you can feel the heartbeat of the traffic-free old town, a bustling street by day and party place after dark. A procession singing religious songs slowly marches by. Stradun’s age-old tradition as the hub for group activities and festivities continues uninterrupted. High above the roofs, people trail the famous Dubrovnik walls. You’re doing that too…later! (see my post on the Dubrovnik Wall Walk ) But first, a dive into the ethereal beauty of the perfectly designed town. Emerging for lungfuls of air at the sweetest spots of all. 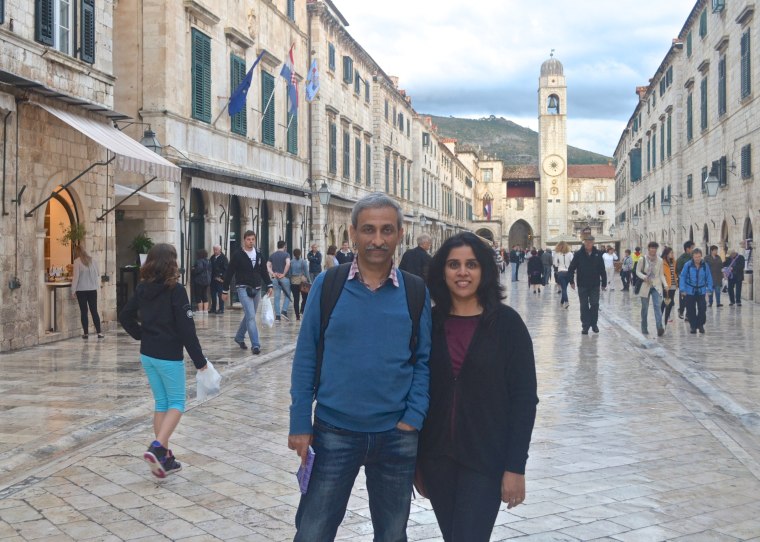 At the mouth of the Stradun is a massive fountain, a sixteen-sided container with a cupola, a masterpiece in itself. ‘Onoforio’ supplied fresh water to the citizens from Ombla river, 12 km away in medieval times, and its water is still drink-worthy. Just opposite, is a Pharmacy that has been open for business since the Middle Ages. A young woman tries to step onto the head of a small stone gargoyle ledge, fixed about half a meter above the ground and sticking out barely fifteen centimetres from a wall. It seems like the mouth of a rainwater drain, and even has a name…Maskeron. Its top surface is smooth and polished like marble from years of thousands of steps and the wall above is greasy from the touch of a thousand hands. A luck thing? The woman keeps trying but can’t balance as there is nothing to clutch. Her husband keeps watching from a distance until love prevails…he walks over and gives her a brief, ever-so-gentle shove from behind, so that she makes it. You smile at the cute scene. She jumps off and kisses him and they walk off together. The legend is that if you balance on the ledge, stand facing the wall, you will find true love. Give it a shot! 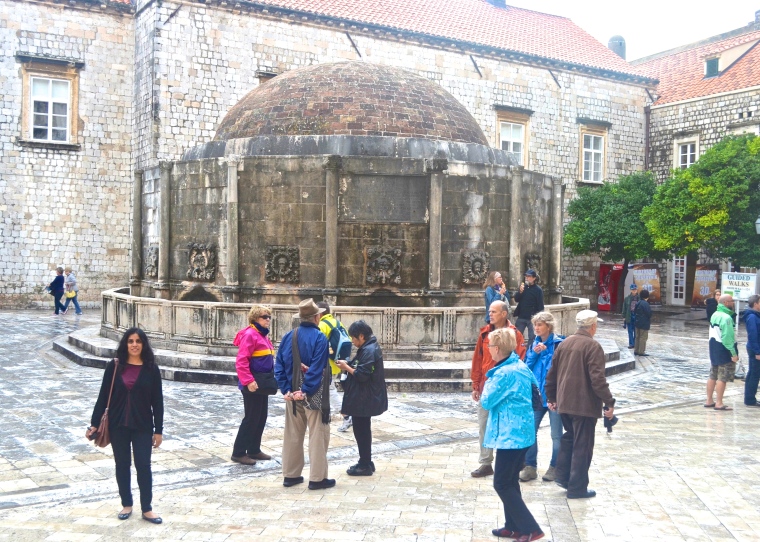 Stroll the Stradun, gazing at the rows of stone houses built in a modest Baroque style…equal heights, similar fronts and shops on the ground floor. Dating back to the post-earthquake year of 1667. Definitely old enough to be labelled ‘old’. Dozens of dark, narrow lanes criss-cross on both sides…cafes and tiny tables line the narrow stone walls. A coffee at one of these, maybe? Onto the modest sized Loggia Square, if you can call that rectangular shape. And a profusion of grander monuments bunched together…without breathing space. The Franciscan Monastery with its bell tower, the Gothic Renaissance-styled Sponza Palace (originally a customs house and mint, now housing the Historical Archives and one of the oldest institutions in Europe), the Rector’s Palace (earlier the municipality, now a museum), the Orlando’s Statue standing guard and the 17th century Baroque cathedral, dedicated to the protector of Dubrovnik, St. Blaise. Only a student of architecture can detect how the Renaissance, Gothic, Classical and other period forms compete haphazardly in the monument facades. No Notre Dame perfection here, but the impact of the harmony is spellbinding. 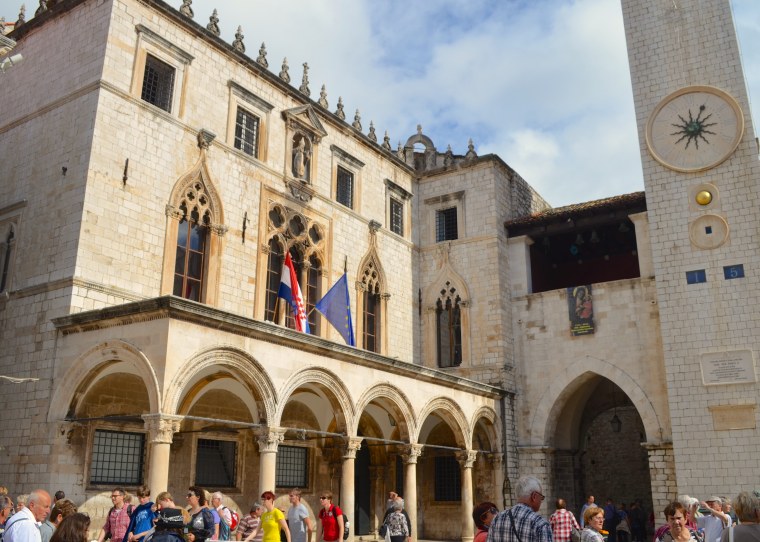 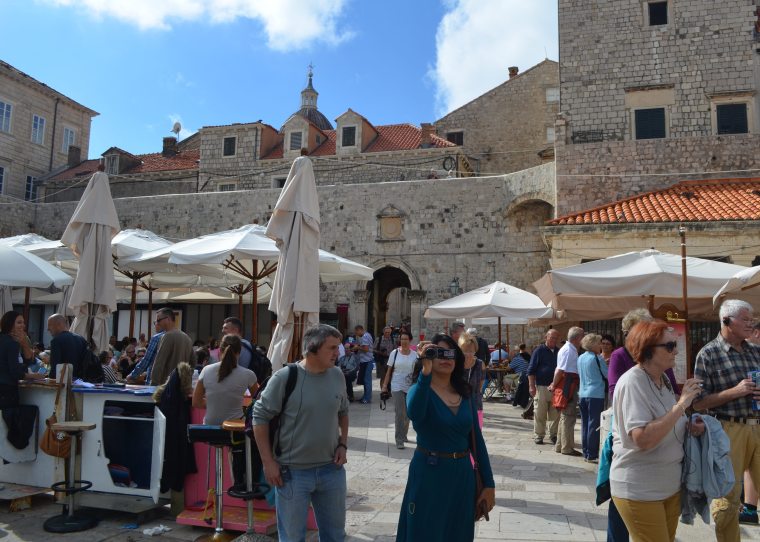 Then climb the beautiful 18th-century Baroque stairs (an indigenous version of the Rome-like ‘Spanish Steps’) connecting the square to an area that used to be the Jewish ghetto. To your right, is the stunning, white St Ignatius Church, constructed in the recognizable Jesuit style, its interior decorated by a Spanish artist with baroque frescoes. Drool at the sumptuous altar inside. A guitarist strums strings at the steps of the Europe’s second oldest Jewish synagogue just next door. Take a picture…he smiles and nods in appreciation. 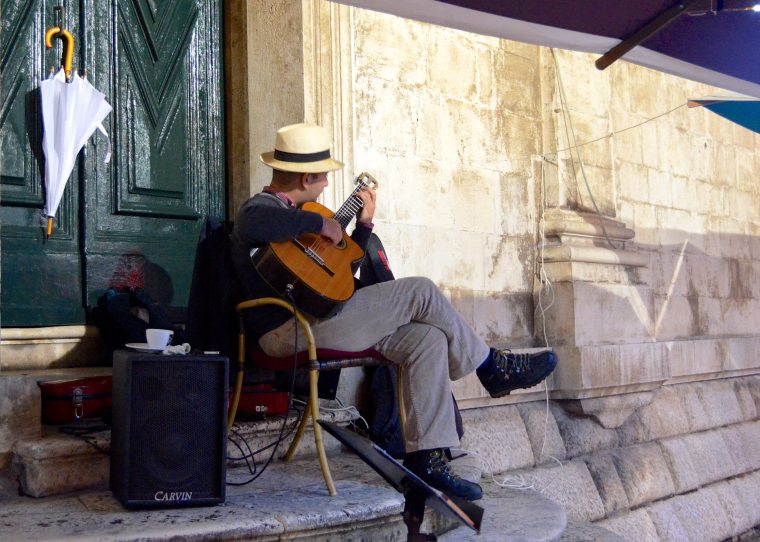 You’re now in pursuit of Buza Bar…Dubrovnik’s best known café. Straight ahead of the Jewish Church towards the left, find a sign that read “Cold drinks with the best view in town” that leads you to what is literally a hole in the wall…down a makeshift flight of rough stone steps to a casual café perched on the edge of a sheer cliff. Straw thatched roof, plastic chairs, tiny folding tables facing the sea. For miles and miles, the azure Adriatic is all you can see. The wind blows your hair into your eyes, and from far below your feet, the foaming waves crash against the rocky cliffs, again and again and again, the rhythmic roar rising and fading. This is a view to simply die for. Buza Bar serves only Pepsi, juices and beer, but this tiny little place, with seating for maybe 50 people, is amongst the Top 10 must-see spots on everybody’s list while in Dubrovnik. Further away, Buza Bar 2 offers formal dining with table service. Paradise is painted in one color…azure blue! 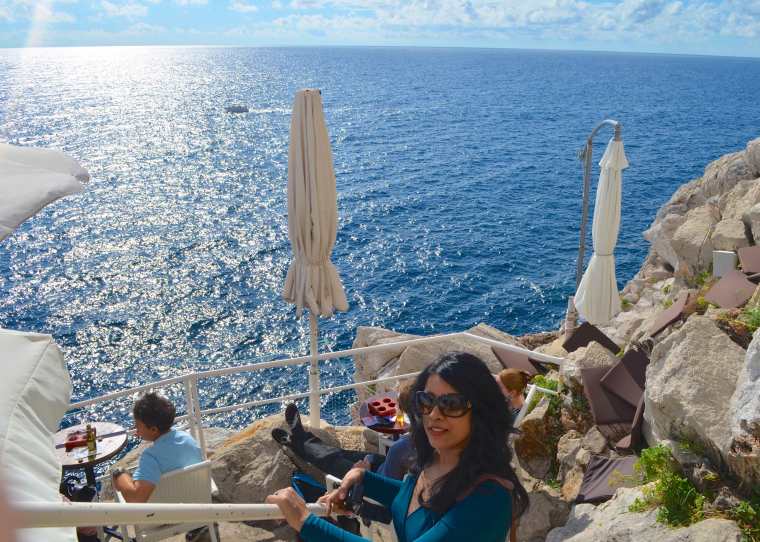 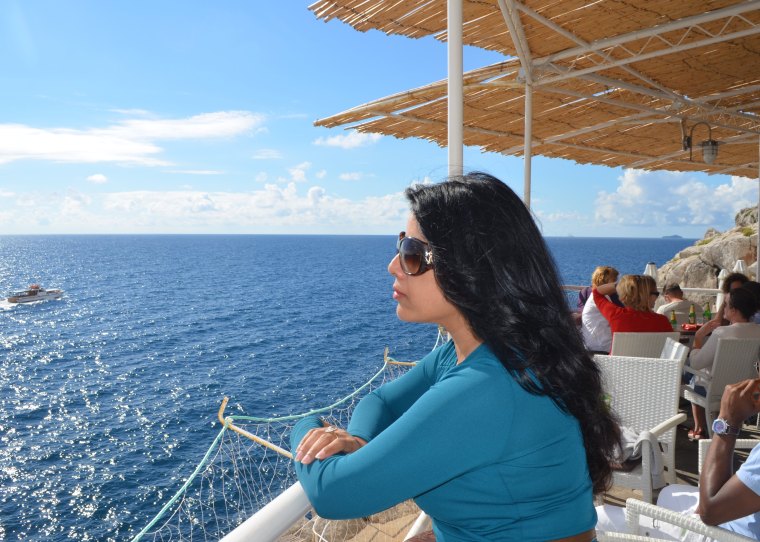 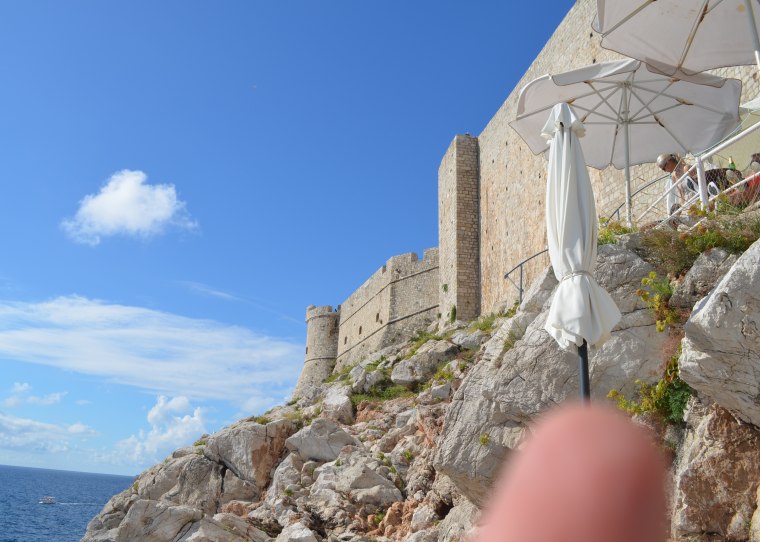 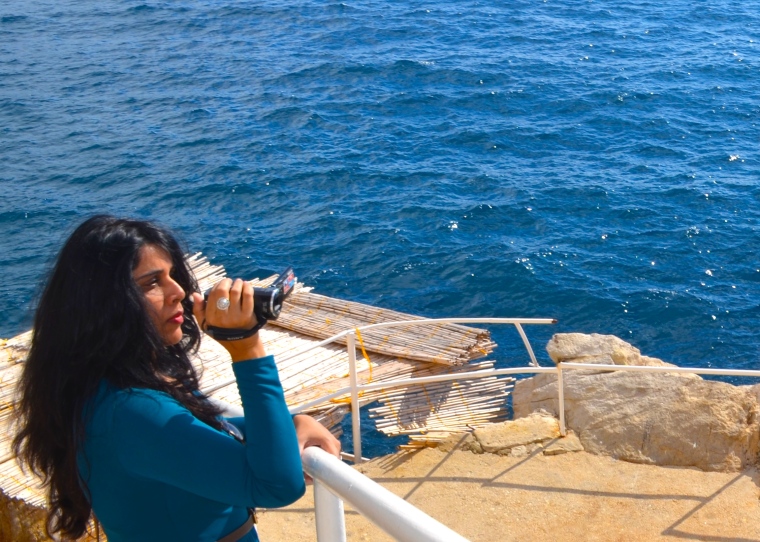 Back in the town, head through the popular St.Dominick Street, once a marketplace for local craftsmen to display their wares, now a medley of Chinese- souvenir shops. Running parallel to Stradun, is Ulica od Puca, where a row of leather shops, handmade souvenir shops and jewellers stand, over a street where many wells were scattered in the old days to collect rain water for use by citizens. Gaze at the artillery-splattered wall of the stone city, each stone is part of a story thousands of years old. It is heart-wrenching…how this grand fortified structure has endured ravages of intruders, survived a massive earthquake, and risen from the destruction of bombardment during the civil war of 1991, when people hid in underground safe-houses without power and water supply for months. Everything has been rebuilt with so much love. In K.Hrvasa Lane, the house of a famous artist, Ivo Grbic stands testimony of the war-ravaged times, painted walls outside narrating ugly memories vividly…the artist’s museum inside baring his creative soul and spirit. Immerse in the past. 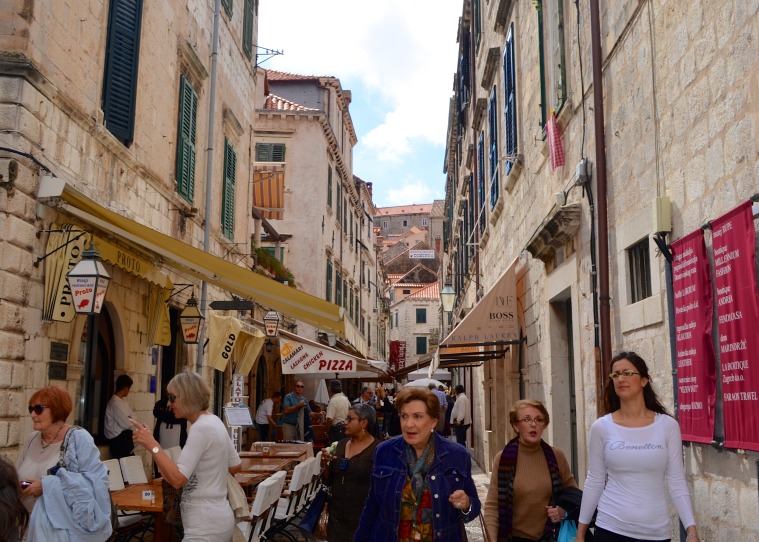 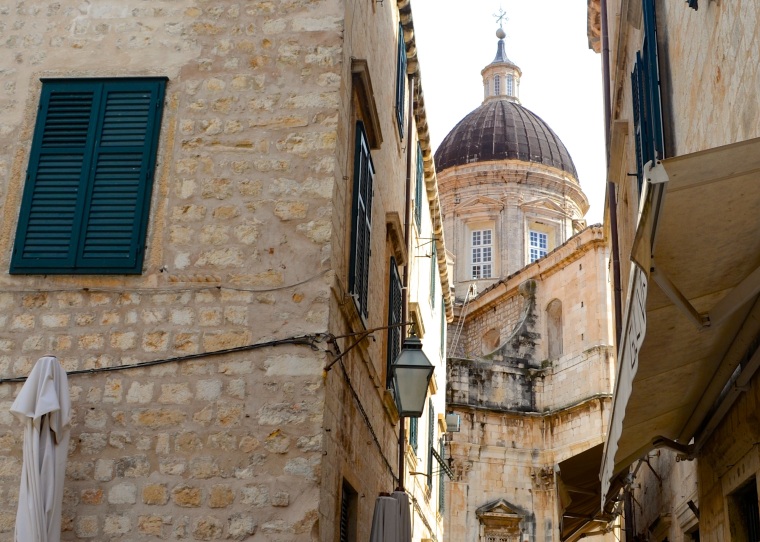 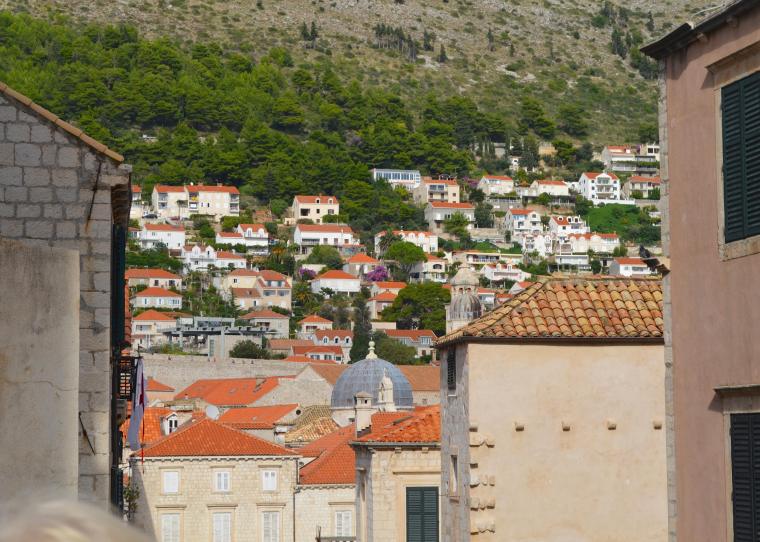 Walk through high, bare, unadorned, plain, solemn, imposing stone walls in search of the Dominican Monastery. Its wide, semi-circular stairs will fool you into believing it is an opera. This is a place to get lost in yourself. Claim a step and listen to the silence. 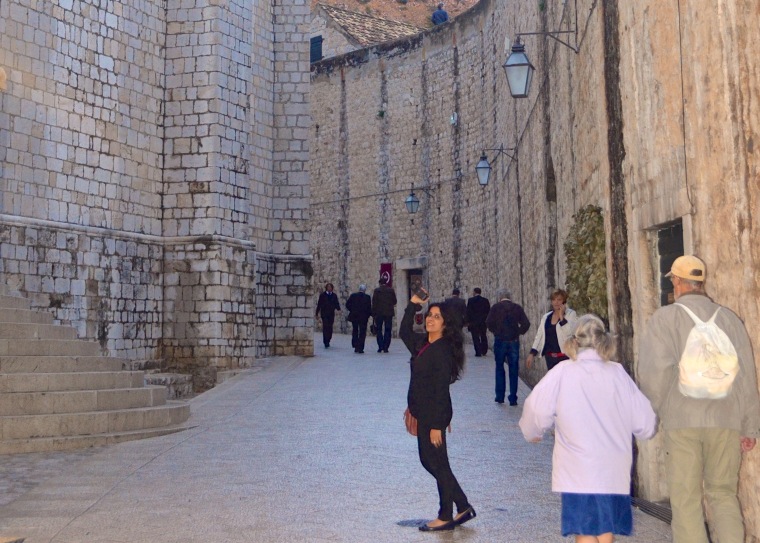 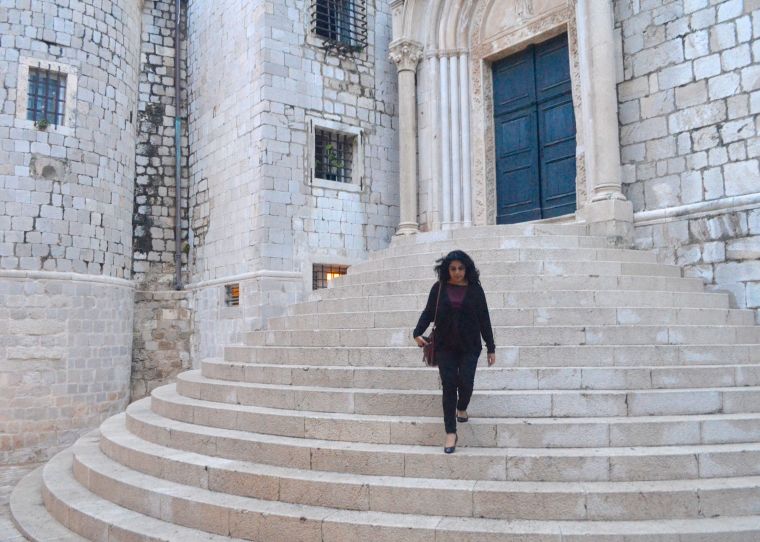 You’re one of the 10,000 that throng these lovely, cobbled streets everyday. Compared to the population of 1000 residents, this number is actually mind-boggling. Sadly, this is a city dying a slow death, as locals move into the new town in search of modern conveniences. More ironical than sad actually, considering that since ancient times, invaders including Turks, Arabs, Napoleon, Venetians and Ottomans have all been vying this medieval town, strategically placed on a remarkable coastline of steep, mountainous terrain and strings of lush islands. In off season, the majestic monuments, shining walkways and grand wall are deserted, charming squares silent and lively cafes empty…a period of forced hibernation, until the crowds return to be amazed yet again, leaving millions of new footprints merging with the old.

Follow the walkway to the Ploce gates, for the ultimate moment of glory. Peering through the bullet-wounded stone walls, face the most photographed sight of Dubrovnik that graces every travel brochure and every website. Your opportunity for some of the best shots of the harbour dotted with boats, darkening Adriatic waters, steep fortifications of ominous walls, and stunning views of Fort Lovrijenac (King’s Landing popularised by the Game of Thrones). Out on sea on the left, the leafy green idyll Lokrum Island floats on the water. Take a longer walk to the Excelsior Hotel for more breathless views. 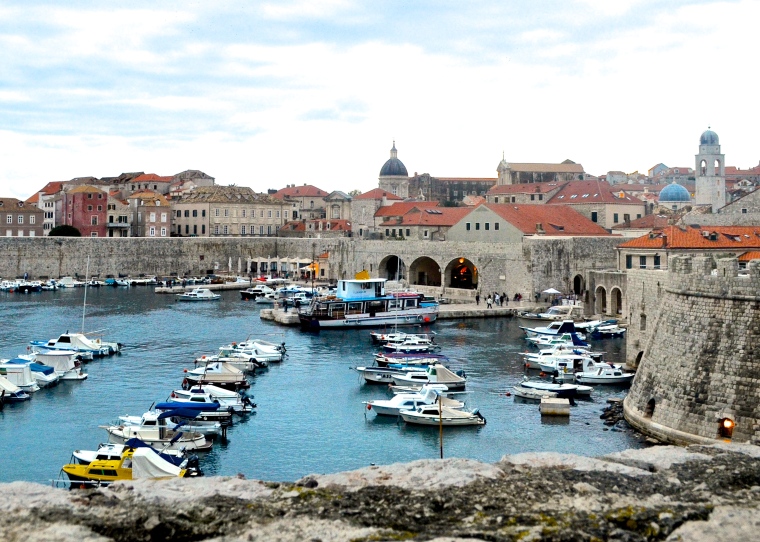 Then walk down to the old port, where the Stari Grad meets the sapphire blue waters dotted with sailboats and yachts, high brick walls on three sides form a curved protective shield, the canyons peek out from the turrets on the walls. Centuries ago, this was where the massive ships from unknown lands would dock, tradesmen would exchange goods and travel discoveries would be revealed. Now local captains with tiny booths hawk touristy glass-bottomed boat trips to Lokrum Island and display worn out photo-albums. At one end, several tables and chairs of the ‘Arsenal’ restaurant are splayed over the docks. This was once a large arsenal for state ships to be built, repaired and stored. Sit on a bench, watch the boats come and go. Imagine the flickering candles on the tables under the skies twinkling with a thousand stars. Breathe in the Mediterranean air, raise your hand slightly, and murmur the magic words…‘pomalo’ (relax). 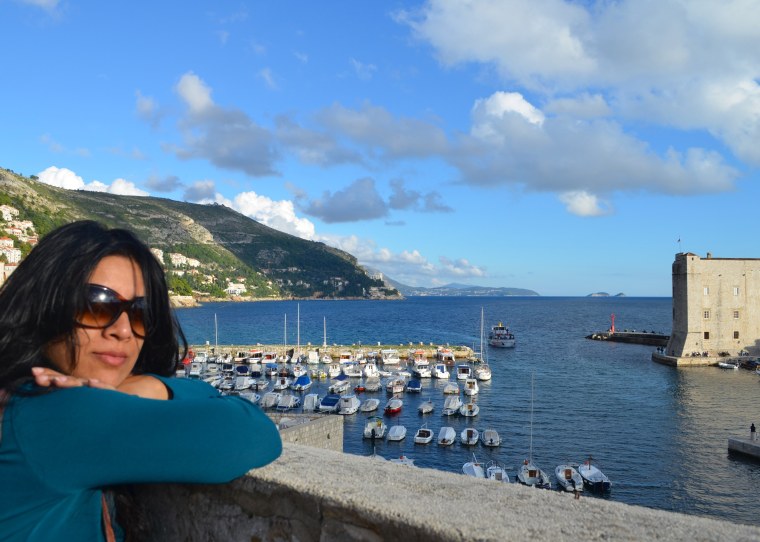 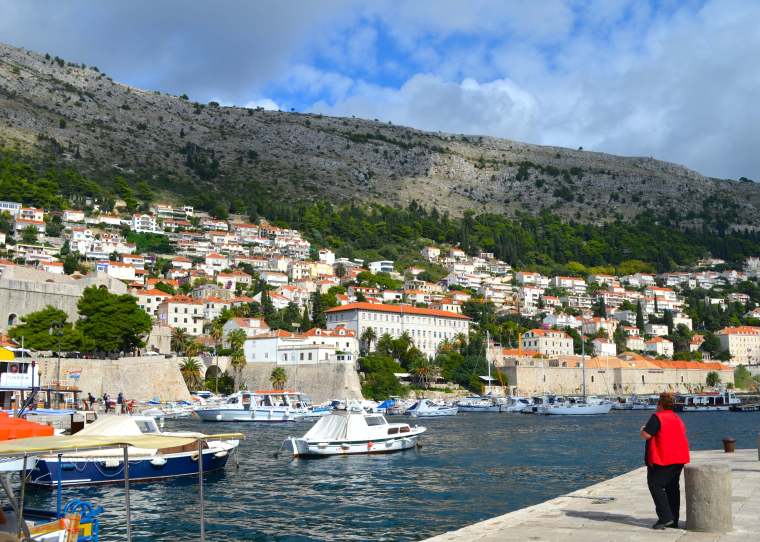 And finally, when the day is done, the shadows of the palaces, glossy limestone tiled floors, gleaming soft lights from antique lamp posts and live guitar strumming make the prospect of a romantic candlelit dinner sounds tempting. The food may not sweep you off your feet, but the atmosphere will certainly make up for that and more. But there’s another appealing alternative. Hike 2 km downhill to the Gruz harbour along a peaceful tree-lined road, minimal traffic and luxury residences. Make a pit-stop to witness a surreal red-gold globe of fire slipping silently into the infinity pool of indigo. Naturally, dinner will be generous…your appetite has been stoked to its limit. 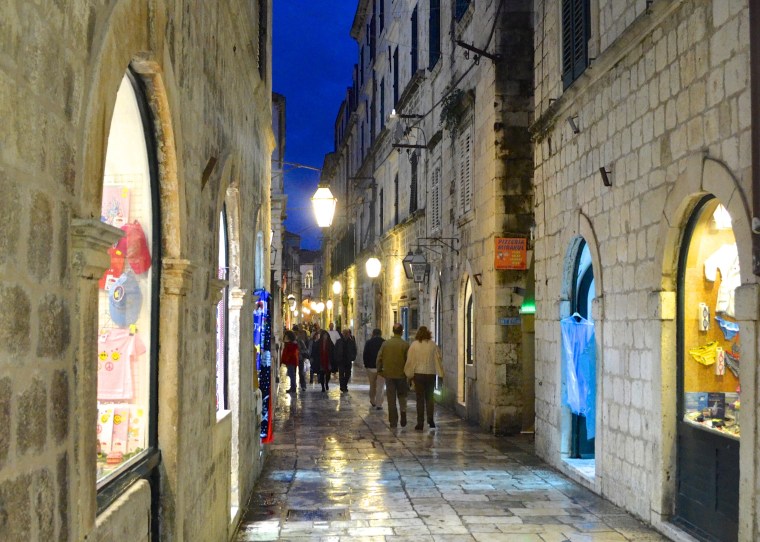