This Tuscan town is famous for the Palio…

Hungover from the highs of flower-draped whitewashed villas, open-roof vintage cars and cliff-hanger coastal views. Dew-fresh Amalfi Coast memories flashing through the mind’s eye. Train-bound to Siena, in the heart of Tuscany, in and out of tunnels, through golden fields loaded with bales of hay and little hill towns dotted with red-roof houses. No big surprises during the 5-minute taxi ride from the station. Until the moment we sail through one of the gates…into one of the most unique walled towns in all of Italy. 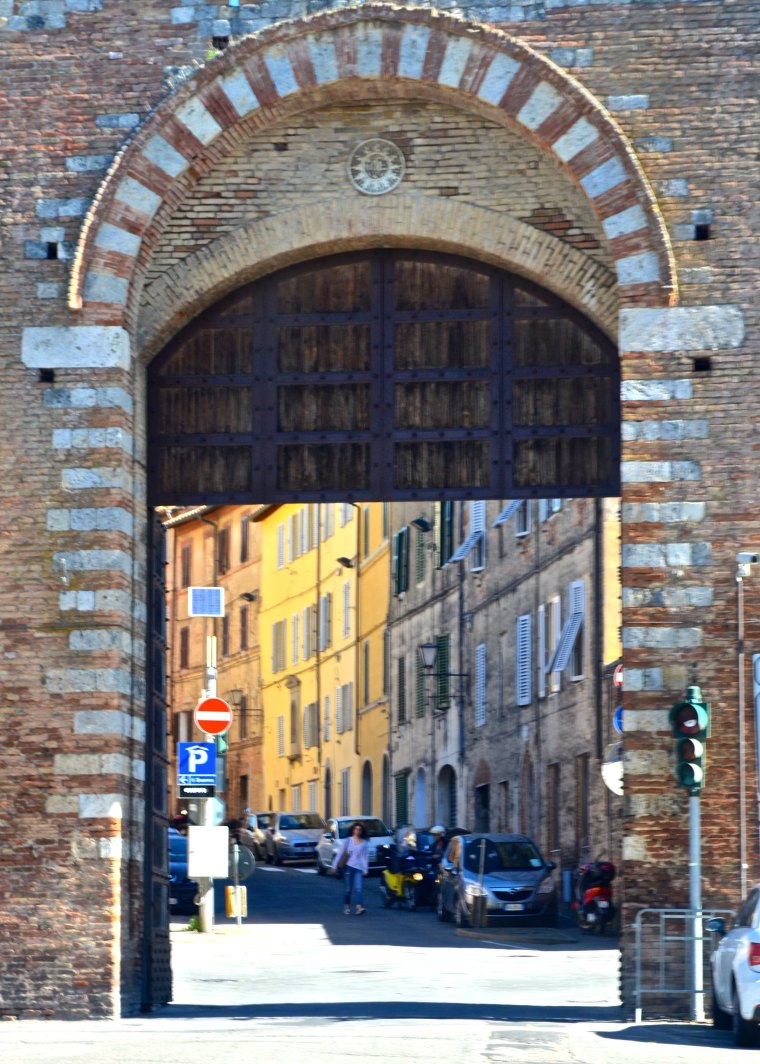 Deeper and deeper into the intriguing maze of concentric circles, lined shoulder-to-shoulder with multi-levelled, medieval stone palazzos, wondering which one will be our home for the next three days. This is the one? Quick wrap on check-in formalities. Eyebrow raise at the familiar connotation of the word ‘chiavi’ at the bell-desk. Delighted stare through windows at wallpaper-countryside. Visioning yellow Vespas, rows of cypress trees and aimless hikes in hilltop towns. Siena, you’ve swept me off my feet, already.

Up above the world so high

Navigating through another shadowy, narrow street, but this one is extra special…it opens up unexpectedly into a sunny square. Zero elbow room for the gigantic Duomo. An illusion of expansiveness or being cramped? Backing up against walls, leaning, bending, twisting, lying, going down on knees…finally managing a full-frontal in one frame. Posing against the striking contrast of the black-and-white striped marble walls. Decoding intricate patterns in the famous stained-glass rose window. Swooning under the divinity of the blue-paint vaults speckled with delicate gold stars. Being privy by the marble inlay floor artworks, on display during late fall. Getting blown away by some of the finest examples of Italian work of art by masters like Michelangelo, Bernini, Donatello, Pisano and Pinturicchio. Feeling the aura of Italian Gothic at the Siena Cathedral. 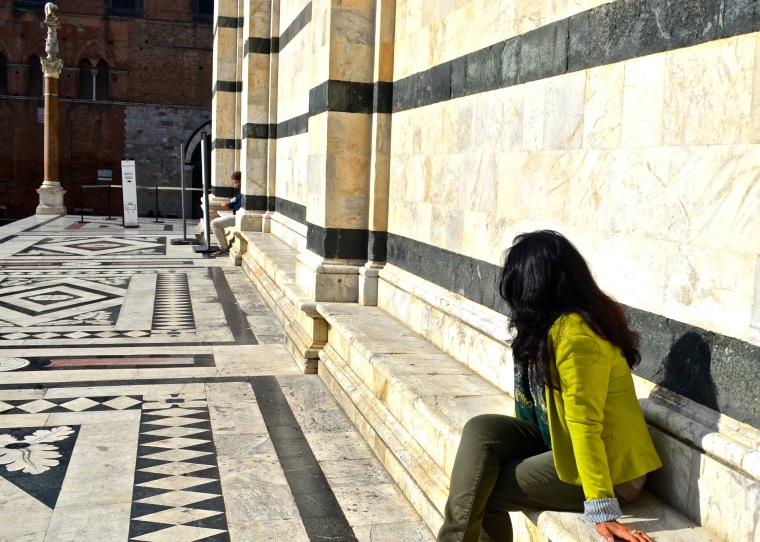 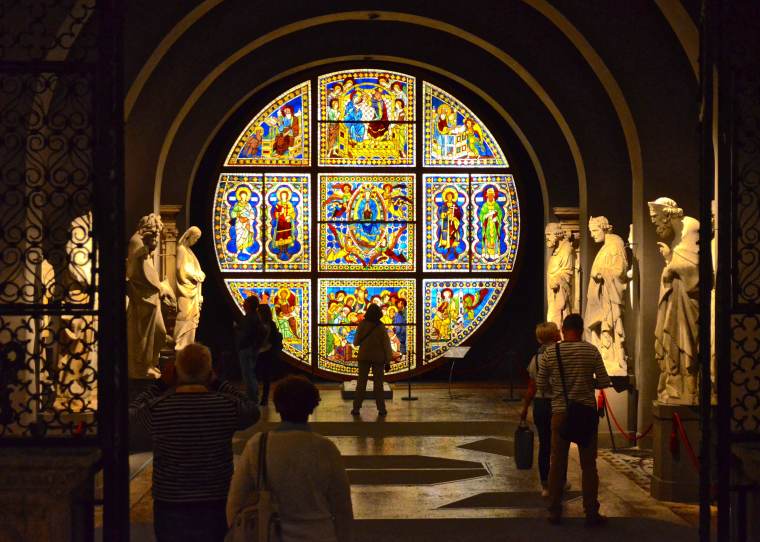 Waiting for a go-ahead signal to climb up the circular staircase to the tower, one at a time. Finding a spot at the pocket-sized terrace, then moving 360 degrees for the panorama in all directions. Hooked by the sprawling spectacle of Siena from up above. Feeding our inner history-nerd with reminders of the town’s original Etruscan roots, its evolution from 1st-century Roman colony to 14th-century hub of prosperity, attaining a stature matching Florence, till the plague wiping out two-thirds of the city’s population. Cut to the present. Panning the tight-knit jumble of red-roofs, broken by winding strips of streets. Trying to find the contours of the underlying seven hills and the 7-kilometres border of ramparts. Thinking how a new perspective changes everything. 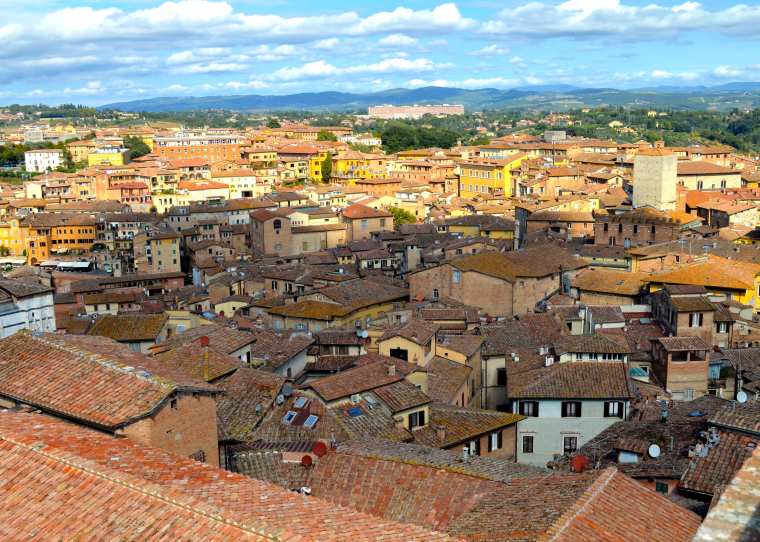 In the heart of the action

Straight into the beating heart of Siena, through a steep sliver of a street between two buildings. Crowning this one as my favourite European squares. Not really a ‘square’ square…more like a conch shell shape, irregular, sloping down to a sunken base. A giant scooped-out pit by default or design? Obligatory perambulation under the colonnades of the pink-red brick palazzos, across the town hall and the huge tower. Taking in every possible facet of the medieval Italian piazza that breaks all the rules of the game. No spatial restrictions, no conventions of shape, no symbolic balance of secular and religious power, no symmetry in the levels of buildings. Curiously homogeneous despite all its imperfections. Tracing the fishbone pattern of the red-brick paving that divides the square into nine sections, one for each of Siena’s nine leaders…torchbearers of the 13th-14th century splendour. 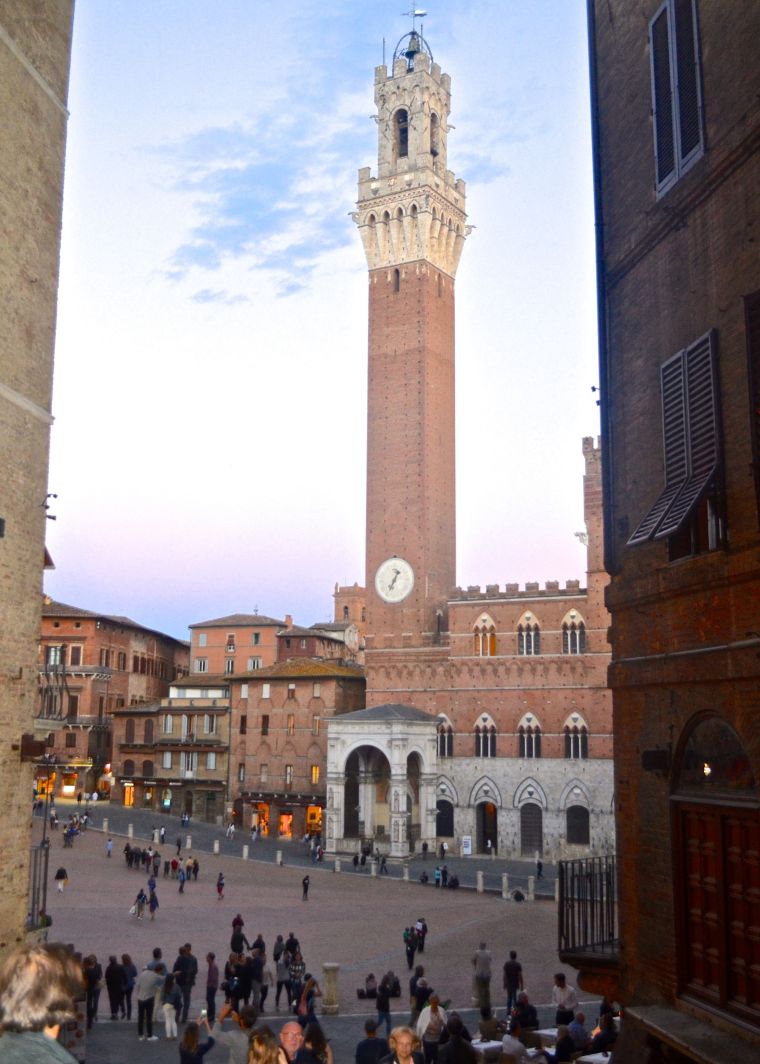 Squatting on the sloping stone-paved floor all afternoon. Imagining the verve and the vibe during the Il Palio…an equestrian merry-go-round with 40,000 cheering spectators, celebrating a time-honoured tradition, three laps and the coveted prize, Palio, a banner made from fine silk. Watching tourists fill tables and busy waiters scuttle around in the cafes that cover nearly two-thirds of the circumference. Studying the flow of traffic in and out of the handful of overpriced souvenir shops. Keeping tabs on couples sipping coffee on cafe chairs squeezed into tiny overhanging balconies…maybe we can grab an empty seat later? Pondering on how much life has changed since the 13th-century, when community fairs and open markets were held here. And how little has changed 700 years on. Piazza del Campo continues to reign as the urban nucleus of Siena, as it did then. 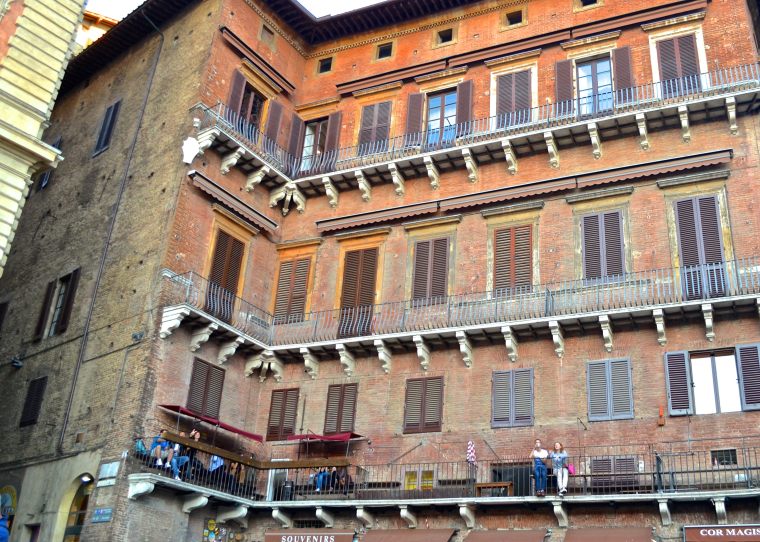 Sunning under the open skies, stretching aching muscles, squinting at the map, drowning in the chatter. Almost Sienese. Except for the lingo. Could get so used to endless middays like these, gazing at the lengthening shadows that stealthily creep up the brick buildings, transforming their complexion from rose and salmon to clay and rust. Drifting lazily through the honey and sepia of the golden hour into the electric blue and indigo of the twilight zone. Loving every microcosm of the persona transform before our eyes.

Loving every step of the way 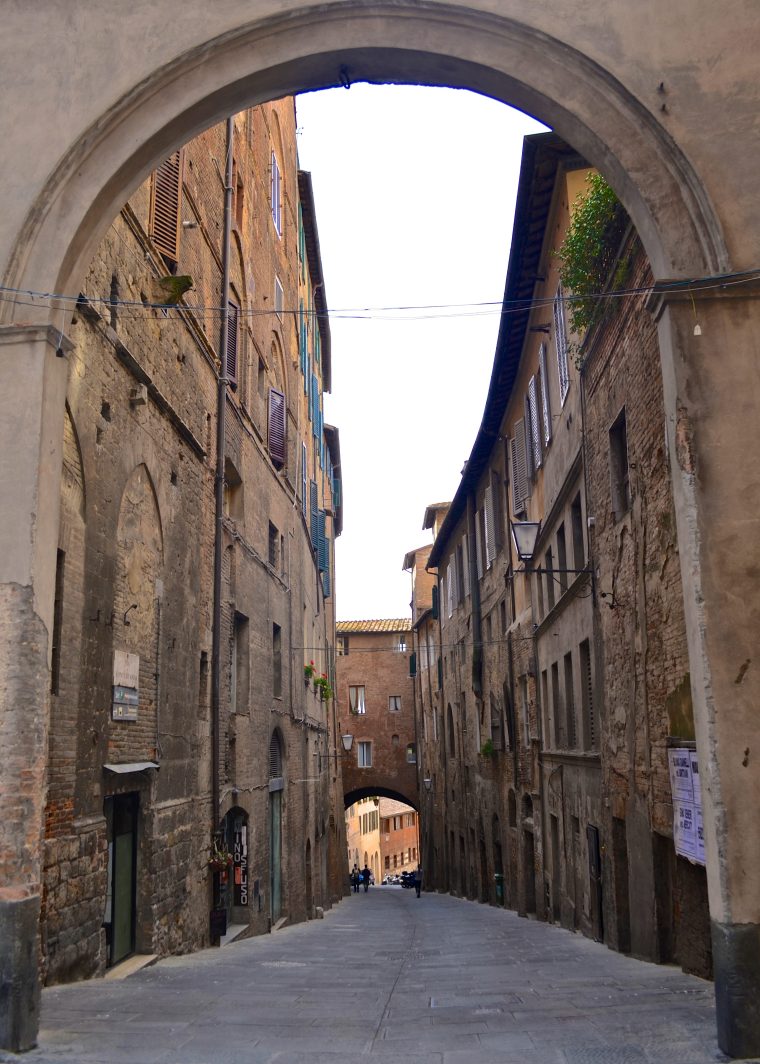 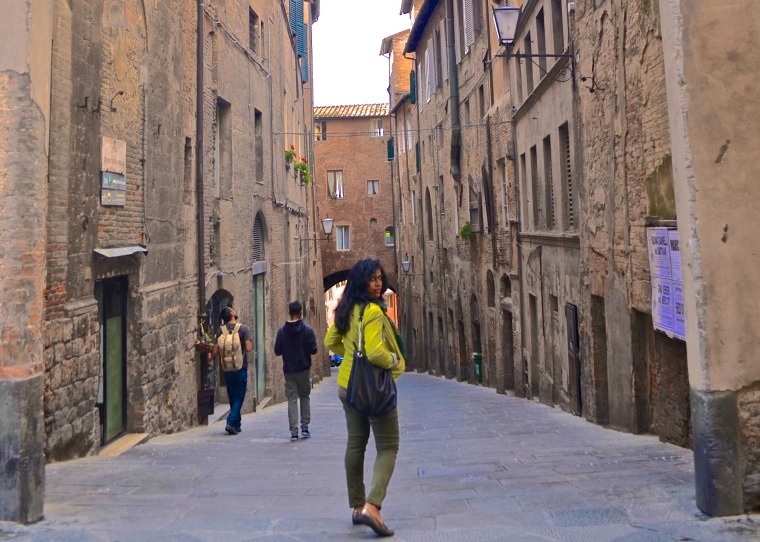 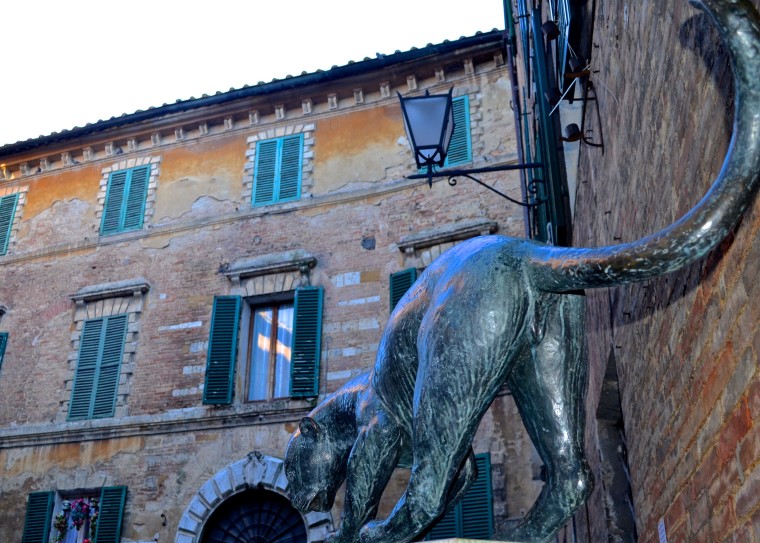 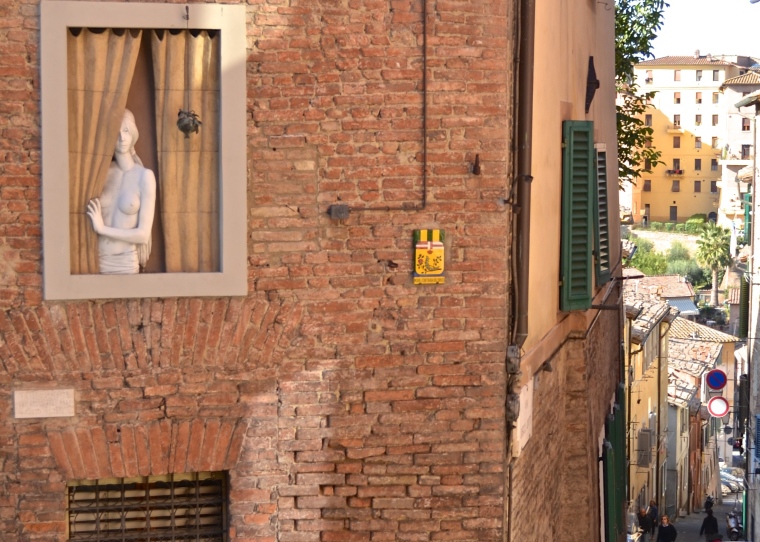 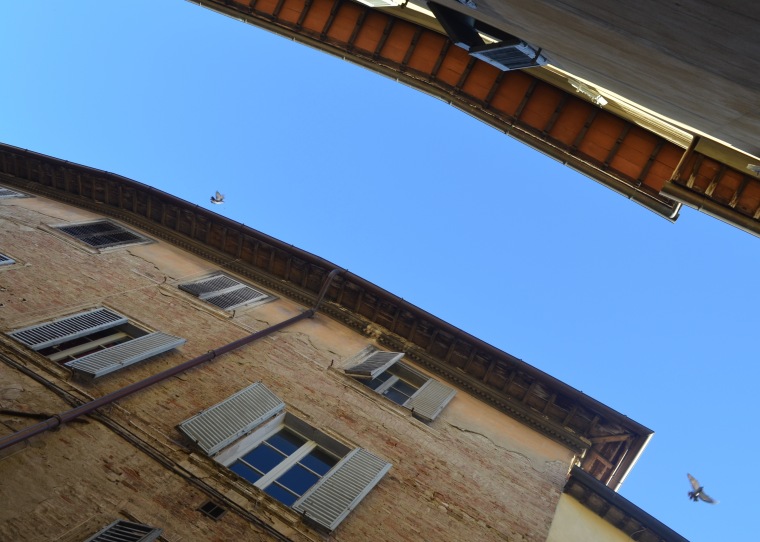 Slow-savouring truffle and wild mushroom tagliatelle with fig-stuffed chicken in wine sauce at a street-side bistro. Biting into the sweet lusciousness of Ricciarelli alla Mandorla in a vintage confectionery. Ending the day with tickets to a Soprano Italian opera. Feeling every dipping and rising chord of the singer’s voice as it reverberates in the church interiors. Being hooked by the pianist’s hands delicately flying over the keys like a ballet dancer’s pointed toes. Strolling back through the stone streets in wrapped in utter contentment and glowing with gentle warmth borrowed from Siena’s scintillating soul. 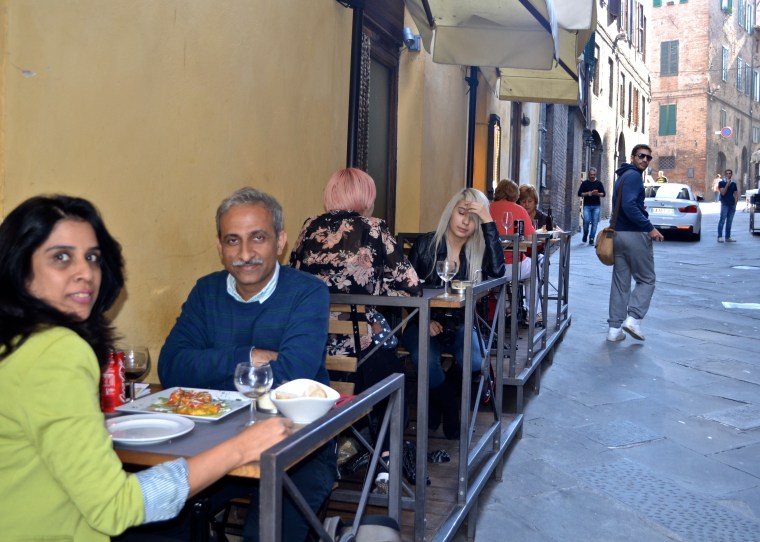 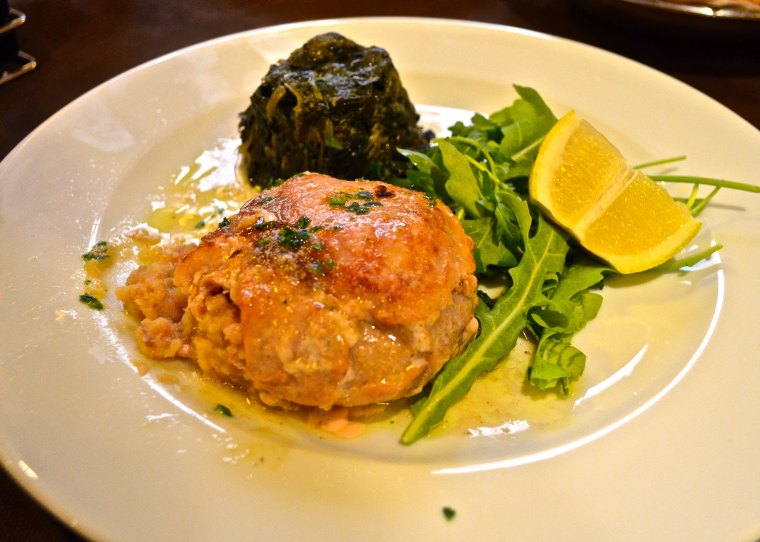 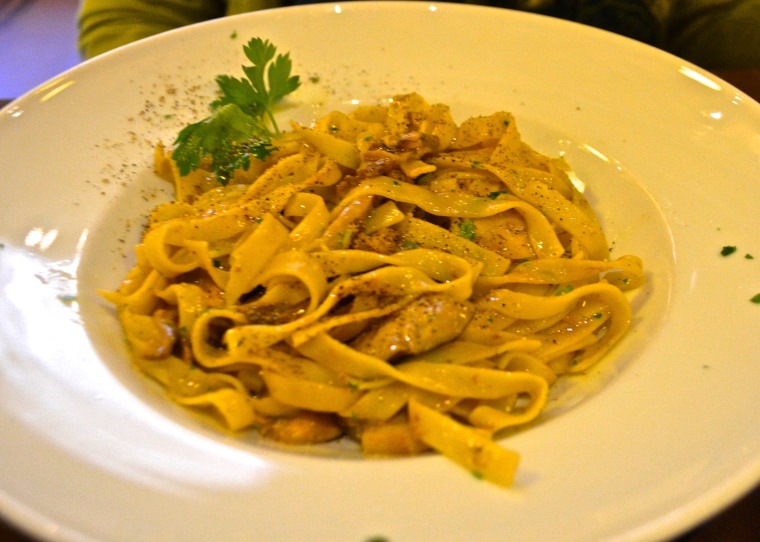 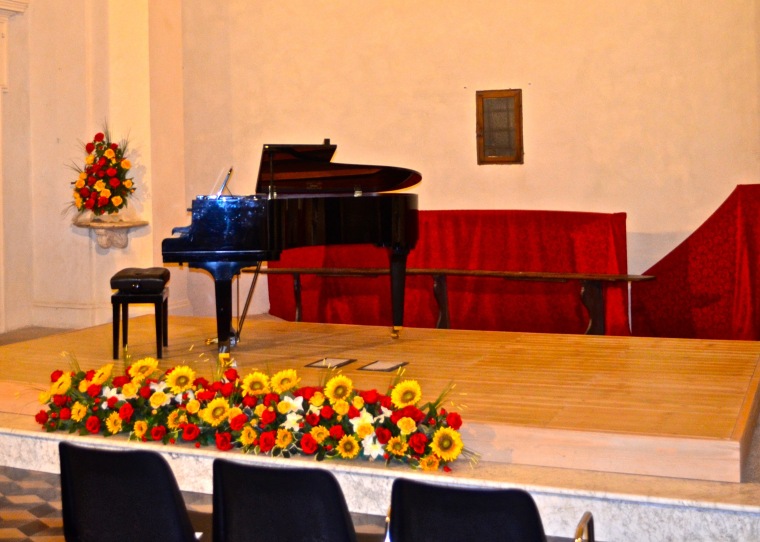