Its second language is French. A river called Senne flows through. The older part of the city is graced with classic Haussmann-style architecture. An unmistakable French influence is in the air. You’re having a good feeling about Brussels. And you haven’t even set foot into the historic quarter yet!

Acclimatisation in the city

Start slow with Place Brouckere. The Ansbach monument, a granite obelisk with the gilt bronze figure of St Michael over a fountain base, is possibly the sole reminder of the square’s glorious past. Glitzy hub for evening entertainment to the flashy neon-lit wonderland of the 20th century to tragic decline in 1960s and 70s…that’s when middle classes abandoned the city centre for more modern suburbs. A few striking Flemish façades here and there, including the multiplex UGC De Brouckère, which retains some glorious golden Art Deco bas-reliefs. Refurbishment plans are on…maybe glory days will return for De Brouckère. 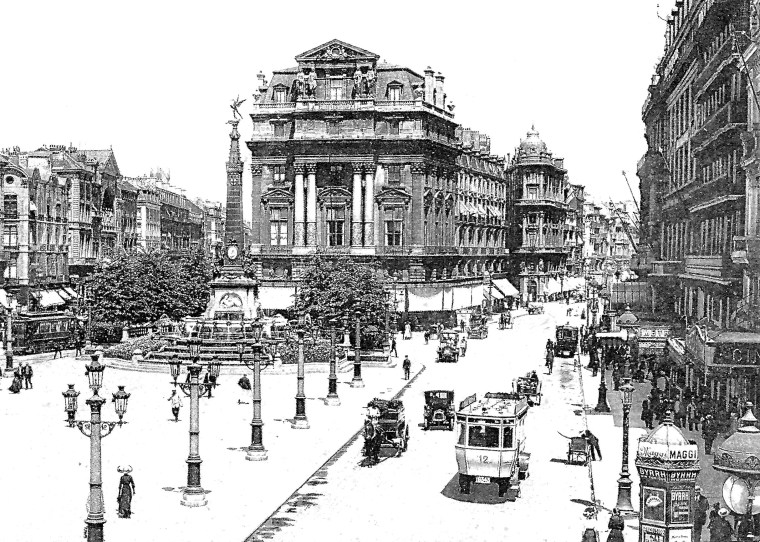 Head for the only real institution that still remains. The opulent Hotel Metropole…its old-world decor and atmosphere draws hundreds of locals and tourists everyday. Make it your home for the next few days. Open for business since 1895, the 19th-century luxury property is a unique blend of ornate Art Nouveau and Art Deco architecture…think sumptuous decor, marble walls, coffered ceiling, stained-glass back windows, glittering chandeliers. A magnificent conventionally-styled long reception desk, heavy brass keys, an art-deco original lift with sliding iron grill doors, and a colourful, Venetian Baroque room with restored furniture. The indulgent café and bar with sink-in expensive leather chairs would have to wait its turn. Brussels is calling.

A few steps from the hotel entrance on your right, turn into the arcade with a beautiful glazed roof and Baroque statues, leading to the Rue Neuve, the main shopping drag of Brussels. The shopping arcade is a 19th-century fad that endures: only three of the original ten survive today – the other two being Royal St Hubert Arcade and Bortier Arcade. Eye the handful of luxury shops, including an oyster bar, gourmet chocolatier Neuhaus, perfumeries, cutlery shops and a tobacco store decorated with charming caryatids and lavish curves. At Rue Neuve, the pedestrian-only high-fashion street, which witnesses daily footfalls of over 40,000, a few hours of retail indulgence is simply unavoidable.

First glimpse of the Grand Palace

The mood is set by the time you reach the Rue de Beurre (‘butter street’). Gourmande and chocolatiers are lined up where exclusive butter shops used to hold fort once. Almost suddenly, without preparation, you stumble onto the corner edge of a large, stunning square at the end of the narrow alley. The Grand Place, is surrounded on all sides with tall Gothic, Renaissance and Baroque facades of elaborately crafted guild houses. Time has turned back four centuries in a microsecond! Hold that corner position for a few seconds to gawp at Europe’s most perfectly preserved, most picturesque, most ornate, most theatrical medieval square. Then move into the centre for a 360 degree view of the ensemble. Finally, inch closer to each side for the close-ups. Each view a masterpiece.

Monumental statement of the Town Hall

The entire southwest side is dominated by the Hotel de Ville, the Town Hall which still functions as a civic building. What a monumental, glorious Gothic statement of Brussels’s medieval prestige! Crane your neck across the 96-meter towering spire. It survives intact from the early 1400s, despite large-scale bombing by French emperor Louis XIV’s army. Details then. A massive wooden gateway studded with statues of prophets and priests. Hundreds of statues of nobles, saints and allegorical figures. Rows and rows of narrow windows, so perfectly aligned. And a 5-metre statue of Archangel Saint Michael, patron of Brussels at the very top. Had the architect really jumped to his death realising that the building was not centred?

Those are 17th-century guild houses lining the rest of the square. Ornate Italian Baroque shines through the neo-classical facades. A rich variety of shapes, forms and designs. No monumentality, just a simplicity and unity of design…like intricate lace work…ornamental gables, medieval banners, gold-filigreed rooftop sculptures, statues of patron saints. Rays of the sun peek from scanty clouds behind the Town Hall. Some buildings bathe in mellow shadows, while on others, gold glints sharply. An endearing timelessness…and a surprising harmony, despite the uneven heights and slight crookedness of the facades. 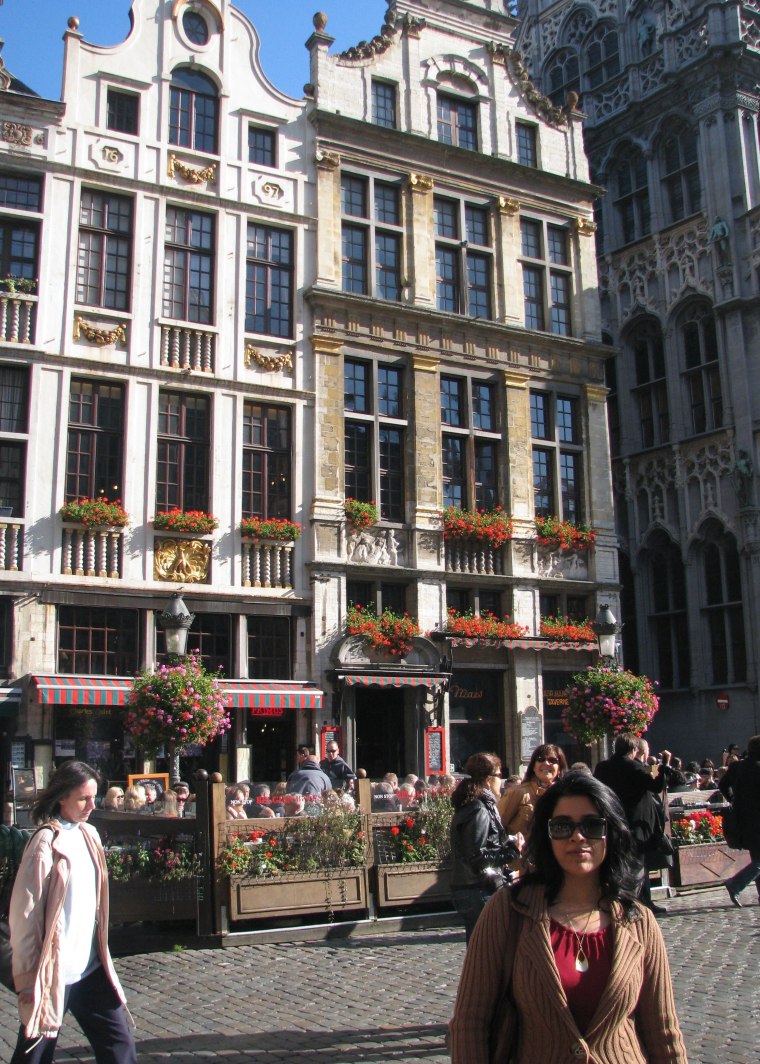 Here’s a little secret. All original wooden structures on this cobblestone square have been superbly restored in stone, after having been razed to the ground by the French bombardment of 1695! The square’s history goes back to the medieval times when Brussels thrived as one of Europe’s main centres of industry and traders controlled politics and commerce. If the busts of 19 dukes on the pilasters of the House of the Dukes of Brabant could speak, they would tell stories of the famed stock exchange which was housed here.

A symbolic gold swan adorns the doorway of the former Butchers’ Guild, now converted into a refined restaurant La Maison du Cygne, where Karl Max and Frederic Engels met and voiced their progressive thoughts. There are nautical images over the Boatmens’ Guild House, medallions of Roman emperors on the Archers’ Guild House, and a bust of St. Barbara, the patroness of tailors, above the doorway of the Tailors guild house (now a deluxe lace store). Just for fun…try locating the Brewers’, Carpenters’ and Millers’ Guilds too.

History peeks from every inch…how deep do you want to dive? Victor Hugo had taken refuge at the Painters’ Guild House, during his exile from France. For museum lovers, there’s the Musee de la Ville, once the residence of the ruling Spanish monarchs. Besides 16th-century paintings and tapestries, it holds over 650 tiny costumes of the famous Belgian icon, Manneken Pis. Interest piqued?

Cafes are lodged within opulent wood-beamed interiors of old guild houses; and guests sit at upper-floor windows affording some of the best views in Europe. These bistros have day-long service….coffee, croissants, waffles and cakes in mornings, fresh mussels and beer for lunch, and amazing seafood at night. Fancy chocolate shops like Neuhaus and Godiva compel chocoholics with gourmet offerings. Even the mandatory Starbucks does not stick out like a sore thumb…the atmosphere is too overpowering for anything to even stake a claim to equal prominence.

And the show-stopping moment

Think you had an ideal day? Then come back at night for a grand finale. The heritage buildings in the square are bathed in psychedelic coloured lights. Reds, purples, blues, greens and oranges dance off the dark cobbled floor. Crowds mill, many just standing around and taking pictures of the spectacle. Dinner under the stars here? Undeniably mandatory!

Sitting at the outside terrace of El Greco, as you relish your delicious platter of gyro meat, chicken souvlaki, and soutzoukaki, imagine the Grand Place in August. Ablaze with hundreds of colours, fragrances and intricate design of the 75 meters long, 24 meters wide flower carpet of 600,0000 begonias from Ghent. That most-photographed Brussels vista has been a show-stopping tradition, ever since 1971.

Its not August, but its even more magical, because you’re here, savouring Greek delicacies in one of the most famous squares in all Europe. Under the clear midnight blue sky, this will go down memory lane as the show-stopping moment in Brussels. I promise. 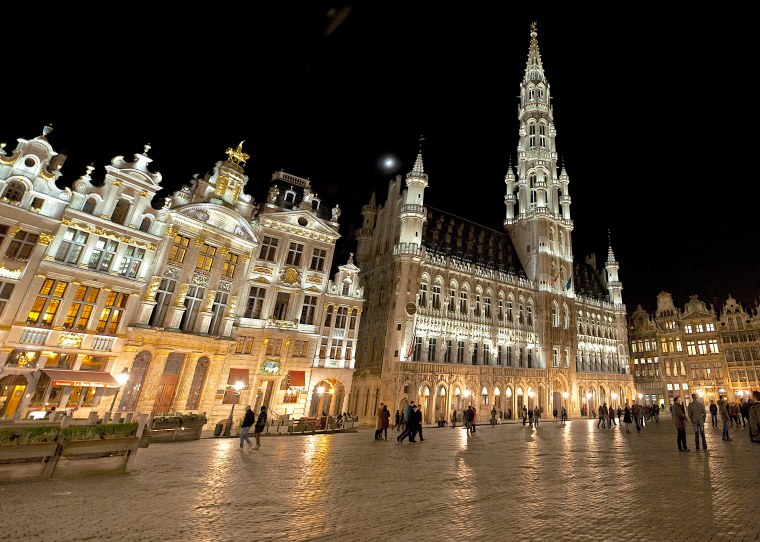 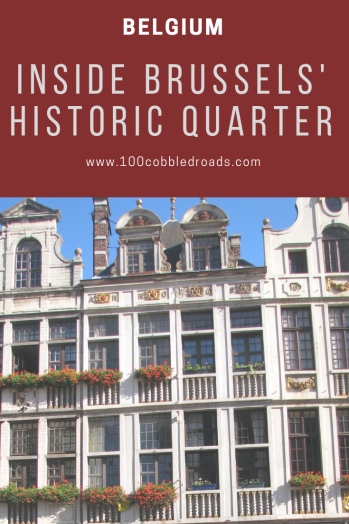 48 thoughts on “Just how enchanting is the historic quarter of Brussels?”