A walking tour in Sultanahmet, Istanbul…

Hypnotic first glimpse of a one-of-a-kind city uniting the ‘chalk-and-cheese’ divergent continents of Europe and Asia. Spectacular skyline of cascading grey-blue domes and pencil-thin minarets of nearly 3,000 mosques. And the electric blue of the rough Bosphorus waters speckled with gliding seagulls. Born as Byzantium under Greek ruler Byzas (7th-century BC), renamed Constantinople by Roman Emperor Constantine for 1,100 years and reincarnated as seat of Ottoman Sultans’ mighty Muslim empire for 400 years…the culture cauldron in Turkey’s star city has enriched multifold with each glorious era in history. Melting pot, indeed! 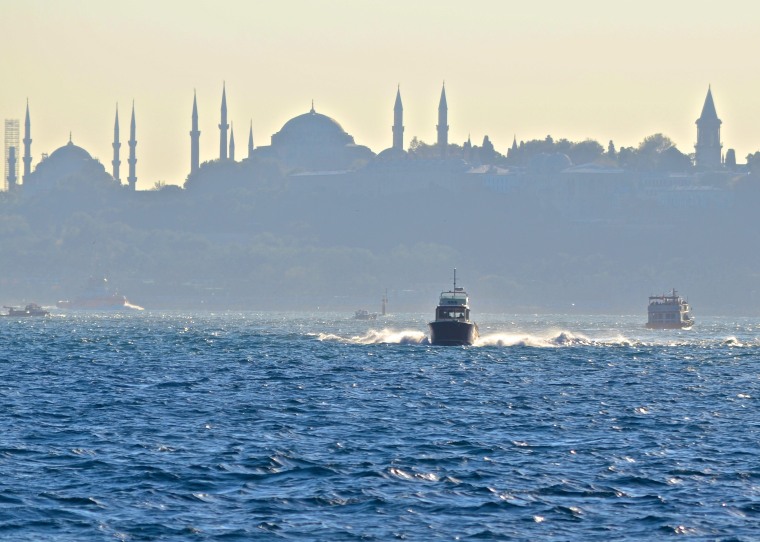 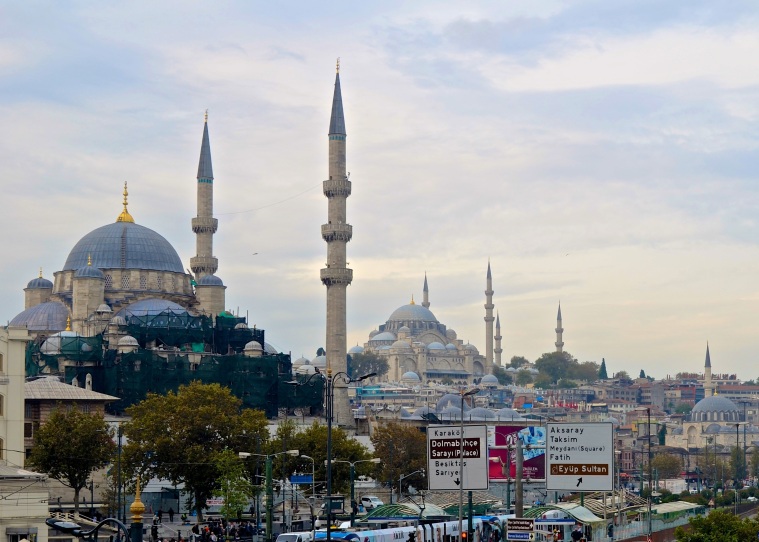 The best way to experience Istanbul’s ancient spirit? A walking tour through its historical heart, Sultanahmet. Follow my league and choose Walks in Istanbul. (They operate in 10 different cities across Europe). Soak in the grace and grandeur of the Unesco Heritage Site with a 6-hour Highlights Tour or luxuriate in a 2-day marathon Grand Tour. Monumental mode on. Brace for impact!

Stock up on history: Humble wooden church built by Constantine morphs into a glorious symbol of the Byzantine Empire, largest church in the world and religious focal point of the Eastern Orthodox Church for nearly 1000 years…courtesy 6th-century Roman Emperor Justinian I. Ottoman Sultan Mehmed II converts it into a mosque and adds Islamic features like mihrab and four outside minarets. Today as a museum, Hagia Sophia stands out as the most unique blend of Christian and Islamic cultures across the world.

Appreciate the architecture: Curious, even seemingly haphazard mix of shapes on the exterior facade disguise the inner brilliance. Classical basilica plan and stupendous dimensions. 336 columns supporting a grand vaulted brick roof. An imperfectly round (even unmanageably-sized) dome with a diameter of 100 feet, 180 feet high from the floor, supported by four huge piers. It succumbed to gravity twice…until Turkish star architect Sinan added massive buttresses in the 16th-century.

Drool over the art: Elegant low-hanging lamp-lit chandeliers in the main hall for fresh home decor goals. Marble and mosaics to dazzle the eye. Exquisite Ottoman floral designs and Quranic calligraphy for unblinking stares. And magnificent views of the central nave from the upper galleries for stunned silence.

Stumble upon secrets: Gold Byzantine mosaics which once lavishly studded the interior walls of the former church, now lie hidden under thick layers of Ottoman paint. Rare chipped, gleaming specimens peek through in the upper gallery and over the main gates.

The Blue Mosque: Soul of the city

Stock up on history: After the series of wars in the 17-century, 13-year old Sultan Ahmed I commissions one of the finest mosques in the heart of the imperial city, adjacent to Hagia Sophia. Wins not one, but three big brownie points. Reasserts Ottoman power. Matches legacy of great predecessors like Suleiman the Magnificent and Mehmet the Conqueror. And shows triumph of an Islamic monument over a converted Christian church. Sultan Ahmed Mosque or Blue Mosque (because of interior blue tiles) redefines the cityscape forever. Trump cards played right!

Drool over the art: 260 lovely stained glass windows. And 21,000 blue Iznik tiles…a first in Imperial Ottoman mosque architecture for the time. Traditional motifs like cypress, tulips, roses and fruits. Linger…as long as you can. 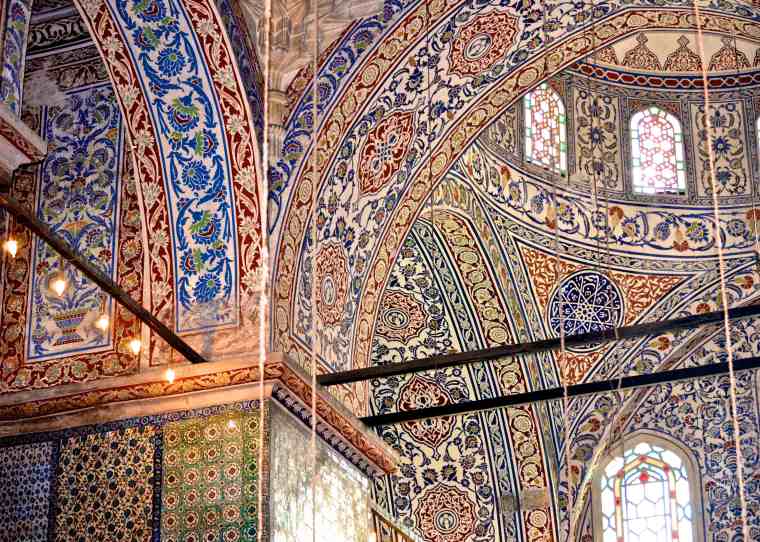 Stumble upon secrets: The Sultan’s request for “altın minareler” (golden minarets), was misunderstood as “altı minareler” (six minarets). But Kaaba mosque had six minarets, so the Sultan ordered a 7th minaret to be added to the Mecca mosque. Squared up well!

Stock up on history: The largest mosque in the city on a hilltop near Golden Horn is the legacy and final resting place of Sultan Süleyman the Magnificent. It is also architect Sinan’s most majestic masterpiece.

Appreciate the architecture: Islamic meets Byzantine in structure and design. Hagia Sofia inspirations appear in the shape of a 173-feet main dome, smaller domes, series of arches, decorative windows and buttresses. Ingenuity gleams through rails that allow the building flexibility to shift up to 5 degrees. The most important feature is acoustics, which Sinan perfected by placing hollow cubes at various points. 10 balconies on four minarets are a tribute to Suleyman, the 10th ruler of the Ottoman Empire. 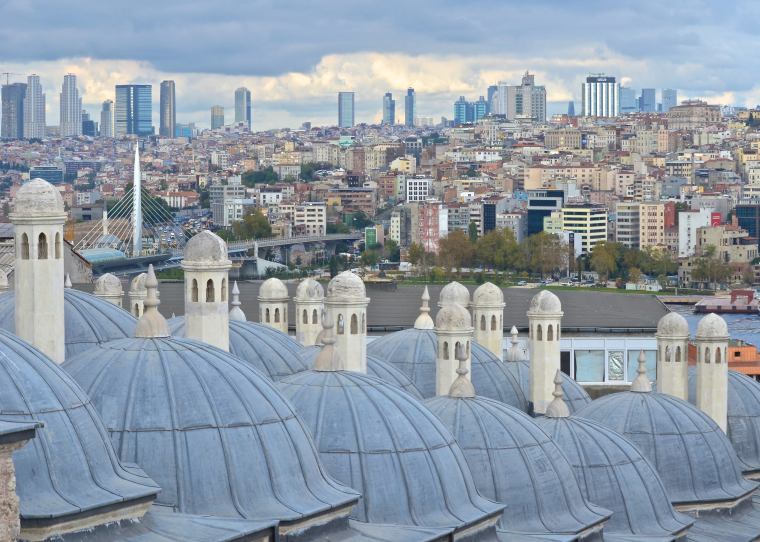 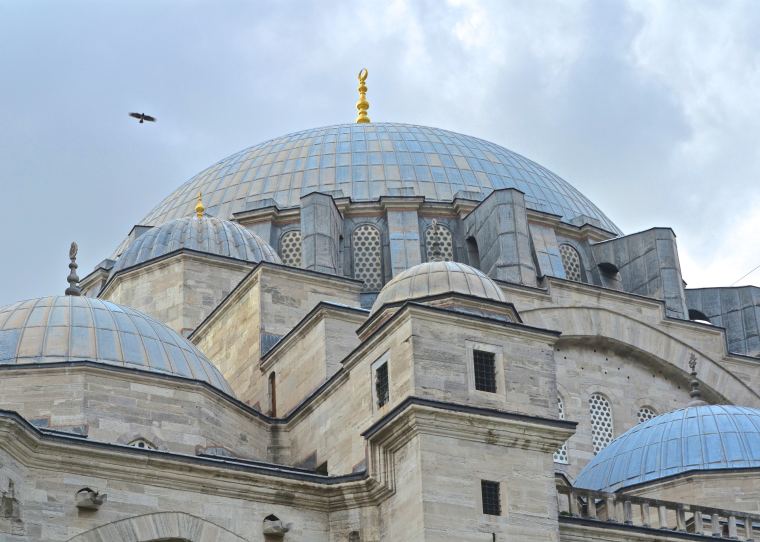 Drool over the art: Inside arches with red-white stripes reminding of Muslim Spain. A giant low-hanging chandelier in the center of the mosque. Iznik tiles wrapped around the courtyard, displaying Ayat al-Kursi, a Quranic verse. And the soft blue-grey marble walls. Serenity now! 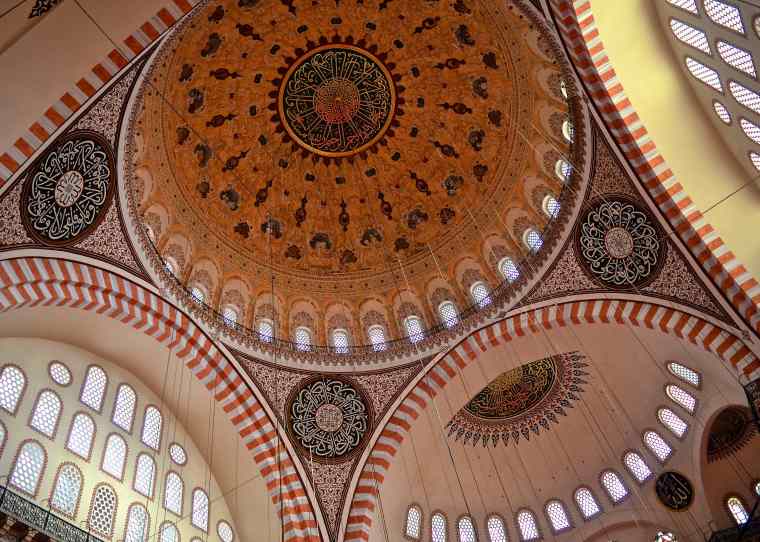 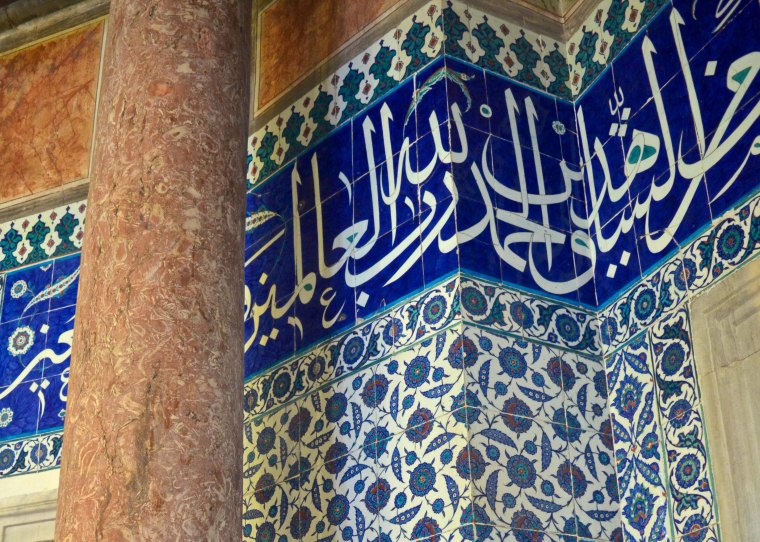 Stumble upon secrets: Sinan’s special screened windows trapped soot escaping from candles, which was converted into ink for calligraphers. Eco-friendly and recyclable!

Stock up on history: On a hilltop corner of the peninsula overlooking the Marmara Sea, Sultan Mehmet II builds an imperial residence at the site of the ancient acropolis of Byzantium. He names the 15th-century Topkapi after the huge victory cannons (‘top’). 25 sultans rule from here for four centuries, till they move to modern palace mansions along the Bosphorus.

Drool over the art: Too much to list. Brilliant Iznik tiles in the Privy Chamber. Lovely light-and-shadow play in Baghdad Kiosk and Revan Kiosk. Topkapi dagger sheath studded with diamonds and four giant emeralds in the Armoury. Delft panels tiles and Murano glass mirrors in the Imperial Hall. The spectacle doesn’t ceases!

Stumble upon secrets: The Queen Mother ruled over the Harem, filled with hundreds of concubines (mostly non-Turkish slaves), protected by eunuchs. Think labyrinthine passageways, cloistered rooms, grand salons and intimate courtyards. Intrigue and conspiracy was rife in the Harem because Ottoman rule was not the first child’s birthright. Anyone could be Queen Bee! So till the 17th-century, all male relatives were killed after a favoured son was chosen to ascend the throne. 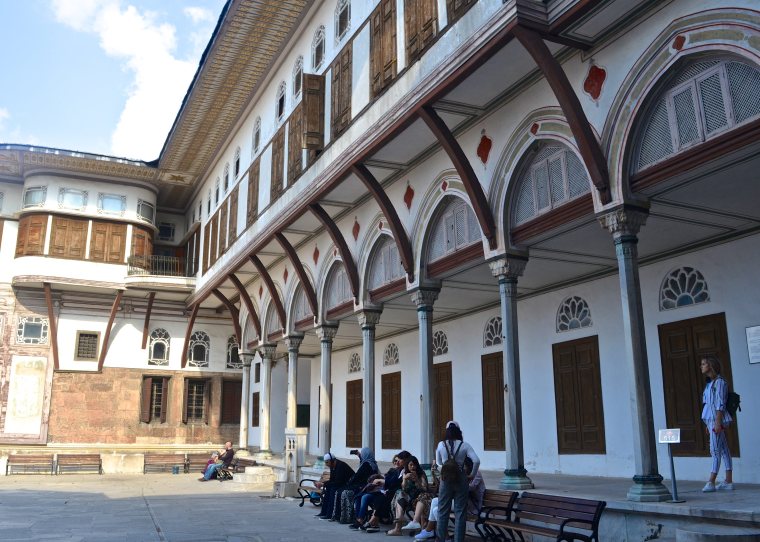 Stock up on history: No fresh water sources in the city…Bosphorus and Marmara don’t quite cut it. Solution? Hundreds of underground stone-made cisterns. The largest of these, the Basilica Cistern built during the reign of Emperor Justinian I in 532 AD, is now a museum. Named after its location under the Stoa Basilica. 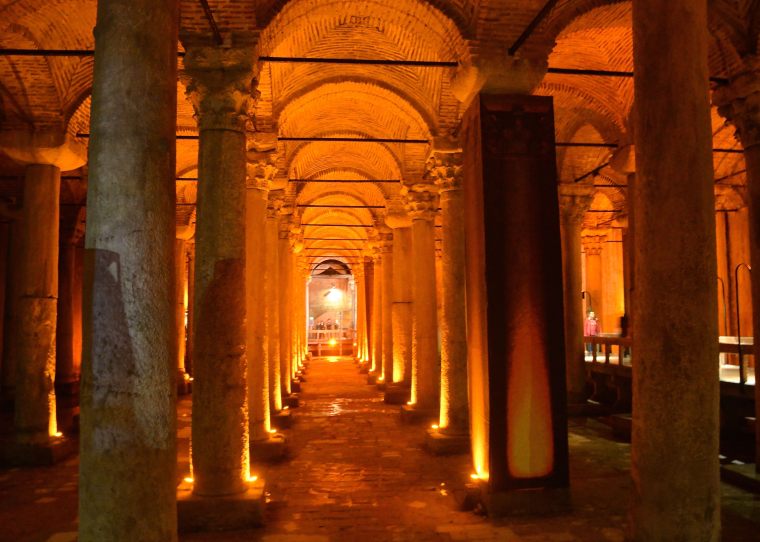 Drool over the art: Water cistern or spectacular subterranean temple 52 steps inside the earth? Yellow spotlights creating a mysterious red theme. Ionic and Corinthian columns, some bare, others with artistic carvings, mostly recycled from older buildings. If you’re lucky enough, you can attend a concert here. Atmosphere is everything.

Stumble upon secrets: Two heads of Medusa, a female underworld Greek mythological monster, form bases for two columns. Legend says the heads were oriented sideways and upside-down to counter the power of Medusa’s direct deadly gaze. The more likely, plausible reason? Better balance and fit. Whatever appeals to you more…

Glamorous galleries of the royal palace. Hallowed interiors of gigantic religious structures. Overwhelmed much? Shift gears dramatically. Lose yourself in the labyrinth of 61 covered streets and 4,000 shops of the Grand Bazaar. A cornucopia of aromas, flavours, sounds, colours and textures…time travel to 15-century Istanbul!Hush! Did a Topkapi guard just gallop by?

We experienced the true spirit of Sultanahmet as guests of Walks in Istanbul over a fascinating six-hour walking tour, with expert guide Duygu, local resident, history buff and die-hard vegetarian. All opinions are my own.