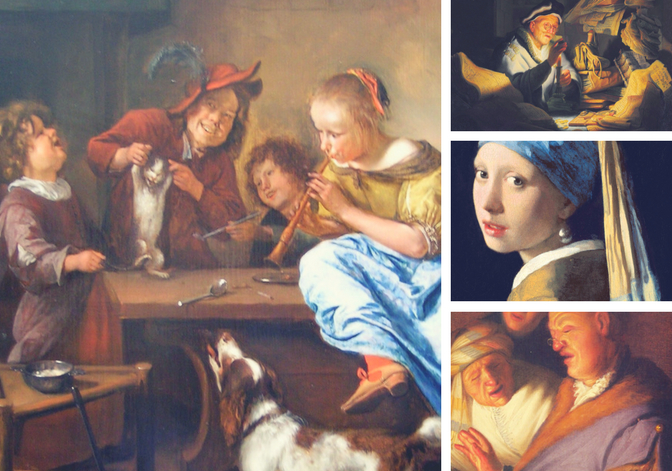 The Dutch capital will fuel your appetite for art. No, seriously!

Which city de-criminalized homosexuality as early as the 1800s and celebrated the first legal same-sex marriage in 2001? Where do hundreds of ‘coffee shops’ offer a menu of cannabis products openly? Where does one find a famed red-light district with legit sex shops, theatres, peep shows and even tours for those who are game? On a lighter note, for the less risky traveller, which city allows the thrill of bicycling without helmets? That’s illegal too!!

Full marks for guessing. But labelling the original ‘Sin City’ as a frivolous hippie destination is not fair play. Amsterdam’s controversial liberal policies owe credit to a centuries-old culture of tolerance and assimilation. Maybe that’s how it ended up with such a prolific art scene. So, retune that radar and get ready ogling of a different kind.

Where it all started

The Dutch National Museum, Rijksmuseum, delivers matchless masterstrokes from the Middle Ages to the present. The spectacular brickwork facade and quaint towers announce the glory that lies inside. Over 8,000 paintings and objets d’art spread over 100 galleries over four floors. There’s a Royal Collection, 14th to 17th centuries Flemish art, luxury inlaid furniture, brilliant Delftware, pristine porcelain, extraordinary 17th-century dolls’ houses, and even finds from a 16th-century Dutch ship stranded on a Russian island. Now, don’t be greedy, make your choices.

Recommended must-do: Trace the blossoming of Dutch art during the 17th-century Golden Age. Find the common theme through these Baroque artworks. One, a sense of richness and grandeur. Two, dramatic use of emotion. Reason? Catholic versus Protestant struggle for survival in 17th-century Europe. Catholic artists used all forms of art to drive home their message…and with such elan! Masters of Flemish Baroque like Rembrandt, Johannes Vermeer, Jan Steen, Paulus Potter and Frans Hals encouraged countless painters to produce a rich heritage of 5-10 million artworks (portrait art, still life and landscapes) for middle class homes. Objects for embellishment and investment, free of encumbrances of spirituality and religion. A wave of unforgettable images in a photographically realistic style, where the stars were ordinary people…merchants, professionals, wives, servants, children, soldiers, clerks, tradesmen, living in ordinary households and going about their ordinary lives. Unassuming, unpretentious. Staring at these masterpieces of average people immortalised as fine art, you feel uplifted.

Johannes Vermeer, master of tranquility and stillness thrills you with four rare paintings. Gazing at the small canvas of ‘The Milkmaid’, you can almost hear the trickle of the pouring milk. The work of Jan Steen offers a delightful slice of 17th-century Dutch life. Think of it as light entertainment sprinkled with folk wisdom. Children teaching a cat to dance. Merrymaking at a family gathering. Seemingly insignificant subjects that would have evoked contempt from many a conventional artist of the time.

But, it is the Rembrandt collection that really takes your breath away. And you know why this Dutch genius is considered one of the greatest visual artists of all times. The paintings have a photo-like ‘realness’. His uncanny ability to capture the wrinkle of the skin and the twinkle of light, fill you with silenced awe. Hushed whispers and stunned gazes from the audience speak volumes about the impact of his craft. Refer to the audio guides for a succinct, yet apt gist of each framed beauty on the walls. Broad thick brushstrokes, layers of glazes for extra gravity, restrained colour palette dominated by dark earth tones and golden highlights, brilliant lights and heavy shadows to illumine faces, jewels and rich fabrics and rich, dark, transparent backgrounds will have you transfixed.

As you scan the paintings for little details that the audio guide describes, feel yourself nodding in understanding. The mini-tutorial on Rembrandt’s art style and life is revealing…and the fact he that actually went bankrupt towards the latter part of his life, will shock you. How would he react if he knew that one of paintings sold for a record $180 million USD million at Christie’s recently!

Close by, is the Van Gogh Museum, home to the largest collection of one of the Netherlands’ most famous artists. Take a coffee break first, and neutralise your senses because Van Gogh is a complete departure from the realist Dutch Baroque style. His creations are the perfect example of symbolism, truly characteristic of the Post-Impressionist era.

200 paintings and 400 works on paper adorn its crisp modern walls, including The Bedroom, Irises, Wheat field with Crows and a number of self-portraits. Dramatic, imaginative, rhythmic, and emotional canvases with dense, sharp, swirling brushstrokes in a bright, opulent palette convey his frenzied thoughts and make inanimate objects pulse with life.

In the Sunflower series, a wide spectrum of hues express the entire lifespan of the flowers, from the full bloom in bright yellow to the wilting and dying blossoms rendered in melancholy ochre. The brightness of the Provencal summer sun and the artist’s mindset appear in perfect sync. His ecstasy alternates with depression, from the sun-drenched colors and brilliant blue sky of South France to one of his last works, where the dark canvas shows with roads leading nowhere, and ominous black crows taking flight. Hadn’t he walked into a field like this one…and shot himself?

Art appetite satiated, stun your taste buds with some characteristic fusion food that the city flaunts with abandon. More works of art…on your plate this time. Between the gourmet bites, snatch a peek at the skinny gabled merchant houses and delicate church towers lining the charming canal waterways outside the windows. Moment of truth…Amsterdam and art seem synonymous with each other. Creativity flows like blood through the veins of Europe’s best-preserved 17th-century city. Quaint and jarring, traditional and contemporary, relaxed and inviting, delightful and adventurous. Unique. Individualistic. So comfortable in its own skin. Isn’t that what art is all about? 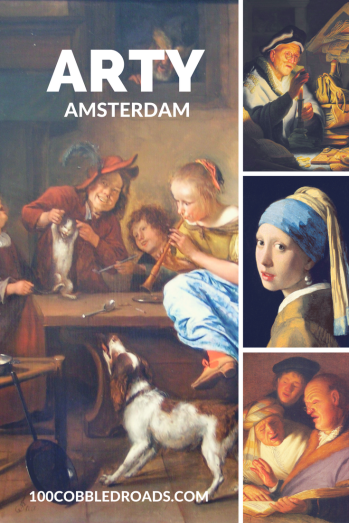 83 thoughts on “These fascinating paintings will make you redefine Amsterdam”