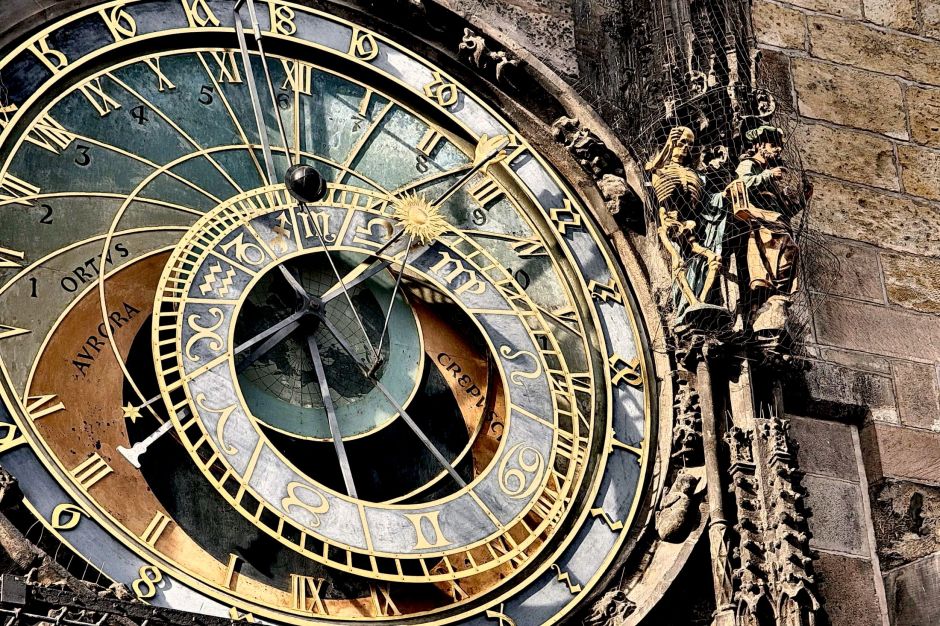 It was Prague. Capital of the Czech Republic. Mother of cities. A symphony of elegance. Our mission to explore the enchanting historic centre, had landed us into the Old Town Square, where hundreds were milling. It was a surprise till then, but our arrival had been precisely timed for a certain spectacle. But what? Seconds before our guide pointed it out, we had spotted it. It was impossible to miss…everyone on the street who was pointing anywhere, was pointing at it. A great medieval astronomical clock (The Orloj) on the south wall of Old Town Hall Tower.

If you are with a tour guide, as we were, you will be informed that every hour, crowds gather to watch a 45-seconds action sequence, performed by…yes, the clock! We were just in time. Within minutes, the scattered crowds had converged, and all eyes were fixed on the star of the afternoon…the Orloj.

As we watched with keen curiosity, a rich symbolism started being mechanically enacted out on the face of the giant dial. A small figure of Christ marched out of a small trap door followed by his 12 disciples, while the skeleton of death tolled the bell to a defiant statue of a Turk. It was fascinating. But it was the intricate design of the clock face itself that stole my heart.

I gazed transfixed at the varying shades of soft blue and ochre yellow indicating the time of day, enhanced by delicate gold outlines and numbers showing two time zones – Bohemian (Italian) and Babylonian. Below the clock, was a lower wheel with 12 medallions of the zodiac signs, showing the date and month! And to think that this beauty had almost been destroyed by the Nazis forever!!

Cut to a few years later. Munich, capital of Bavaria, heart of Germany. It was almost noon, and we paced across to the Neues Rathaus (Town Hall), to catch a similar performance by the historic Glockenspiel. The sun was shining down and Marienplatz Square in the Old Town was jammed with tourists waiting eagerly to witness the show.

The clock chimed 12 and everyone was tuned in…there was a sea of people craning their necks towards the 100-ft tall ornamental Gothic clock tower. Hundreds of cameras and cell phones were poised for action. We were ready too! Those who wanted to watch from eye level had headed to the top floor of the strategically located Hugendubel bookstore. Others had grabbed tables at the Café Glockenspiel right opposite.

This time, there was an elaborate dance of the twirling figurines, representing stories from Munich’s history, perfectly synchronised with musical chiming bells. A pretty unusual concert, I thought, specially with considering its daily re-runs since 1908! When curtains went down, the entire crowd cheered and clapped in unison, and before we knew it, everyone had glided away in different directions.

The two clocks on the walls of the old town halls in Prague and Munich are so similar, don’t you think? These erstwhile time-keepers for local residents stand proud with centuries-old legacy and a newly defined role in the new world as tourist magnets. For each of us who owns several watches but is always hard pressed for time, these grand clocks flash us back to an age when people had no watches, but a lot of time on their hands.

26 thoughts on “Stop! That clock is singing!”