There’s a different Barcelona behind Las Ramblas and you wouldn’t believe it until you stride a few feet down a side street into the city’s old Gothic Quarter, Barri Gòtic. This vast area stretching between Las Ramblas and Via Laetana is where Romans had developed their early settlement in 133 BC. Remnants of the fortifications they built to protect their city can still be found. A slice of ‘Barcino’ still exists in ‘Barcelona’. Devote a day to dwell on its delights.

For an apt curtain raiser, trace out Plaça Reial (Royal Plaza), Barcelona’s best-loved porticoed square. Completely enclosed by uniformly designed buildings with porticoed ground floors, Hellenistic terracotta motifs and busts of navigators and explorers. A profusion of palm trees indicating that is was a affluent neighbourhood in the 19th-century. Chock-a-block with bars, cafes and open-air terraces to soak in the atmosphere. Best pick? A spot by the large cast-iron central fountain. Best memory? Street lamps designed by the young Gaudí using an ingenious mix of stone, wrought-iron and bronze. Other than the unique red floral motifs, ivy leaves and Barcelona coat of arms, it has two snakes and a winged helmet symbolising Mercury, the Roman god of commerce.

Time to fold the map and follow your instincts. Any direction is good enough. It is a time-warp, you drift along in a trance. Within minutes, the grand boulevards and elegant modern districts dissolve into a blur and you are lost in a wondrous Gothic tangle, replete with vestiges of the Roman era. The illustrious past of Barcelona…from Roman colony to 14th-century maritime power seeps through the aged stone walls.

Quirky crafts shops, classy antique stores, stylish boutiques, contemporary tapas bars, gelaterias, trendy cafes and pastry stores line the narrow winding streets. Musicians hum Catalunya folk songs and strummed guitars outside stony walls. You can sense the creative Barcelona spirit permeating into daily life in this ancient neighbourhood, which was once home to Miró and a teenaged Picasso. Under white umbrellas in open-air art markets, artists display wonderful landscapes, portraits and abstracts in all sizes. Tourists admire techniques and discuss prices. Distractions are aplenty, but you’re in no hurry to get anywhere.

You’re walking through centuries of continuity, yet a strange sense of comfort. There are tell-tale signs that so much has changed, yet so little has changed. At Placa de Sant Just, the water still trickles from Barcelona’s first fountain dating back to the 14th century…people drank then, they drink now. At Plaça del Rei, where Columbus was received, the who’s who of Spanish society is still honoured under the King Martin’s Watchtower. At the Negotische Bridge of Sighs at Bisbe, speckled with gargoyles, skulls, monsters, goddesses, vines, bearded men, and other Gothic symbols, people still believe that if you walk backwards underneath and make a wish, it comes true. At the Plaça de Sant Felip Neri, bullet-holed church walls still tell the tragic story of the bombing during the Spanish Civil War and hold memories of Gaudi being run over by a tram. You’re wondering if you have transcended time, but, it is just an illusion…modern outfits of people around give it away.

It is seductive…this maze of heavy stone buildings. Let your eyeballs dance along the elaborate ironwork on wrought-iron balconies and stunning stonework around windows. Trace the contours of antique lamp posts and ancient iron knockers on doors. Trail the path of brick archways leading into stone paved alleys and following the outlines of fluted Roman columns on well preserved defence towers. Allow your thoughts to unravel the secrets of modest shrines in wall niches, and delve into history of the medieval sculptures on restaurant fronts. The warm sun filters through a shady tree in an intimate square behind an old forgotten church and your heart melts. Every nook and cranny offers extraordinary surprises and you can’t get enough. It is addictive.

Everyday life sparkles elsewhere. A man shifts a wet towel on his balcony railing to catch the sun light. A group of friends converse animatedly on a lone table under a canopy. A graffiti mimics a scowling face at the corner of a building. A row of bikes lean along an empty lane. Children play soccer in a little plaza. Life seems uncomplicated, maybe it really is. Many streets are so deserted, there is hardly anyone, at other places, you have to avoid stepping onto shoes…armies of tourists march on either side. In this very neighbourhood enclosed by high stone walls, population was once so dense that two epidemics (1834 and 1860) killed three percent of the inhabitants each time. Maybe something good came out of those tragedies, because in 1854, the old wall were torn down and modern urban planning started in Barcelona. Ironically, the medieval town that had become somewhat of a bane, has again metamorphosed into a boon for Spanish tourism.

Towering above the center of the Barri Gòtic district is Barcelona’s colossal cathedral, La Seu, a fine example of Gothic architecture from the mid 14th-century. Strangely juxtaposed within fortress-like walls, its ornate exterior has the familiar prickly spires, robed statues and intricate lace-like carvings that are usual features of that era. Study the oddly-placed front spire and two simple towers on the sides. 250 protective gargoyles surround the structure and on the left side, a relief of an eagle head with lion feet versus man depicts the eternal fight of good versus evil. Ten steps lead up to the entrance…a pretty pattern is embossed on the two main doors, and the pillar in between has a life-size statue of Jesus on it. Inside, is a gilded altar, sprawling nave and 28 side chapels, but most surprising is the pretty cloister with a small tropical garden and a mossy pond, home to colourful fish, turtles and a bunch of white geese! 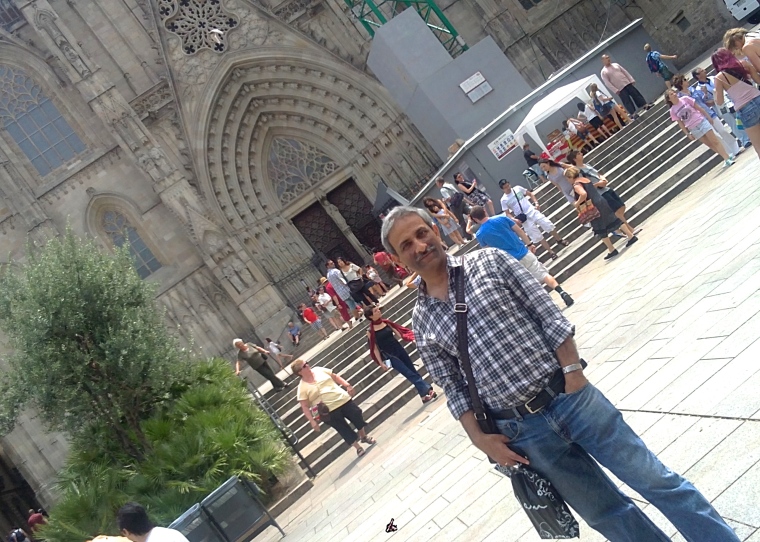 An impromptu turn into a narrow lane to the left of the cathedral lands you into the Museu Frederic Marès, where over 50,000 sculptures and objects d’art are on display. An interesting collection of fans, clocks, jewellery, photographs, keys and even pharmacy bottles keeps you engaged for over an hour. The museum is spread over several buildings, including rooms that were part of the Royal Palace itself. Intimate and cozy with its stone arches, brick-lined corridors, wooden beam ceilings…as if you are still in the home of the owner and private collector, Frederic Marès. The courtyard-cafe has tables under white canopy umbrellas, a large orange tree bursting with vibrant fruit, and a half chipped Roman column. Succumb to a hot coffee and conversation.

Later, make time for the open market stalls of Mercat Gotic in the square outside the Cathedral. Scavenge through a host of antiques and secondhand collectibles…ceramics, vintage dolls, instruments, timepieces, books, and rare photographs…whatever takes your fancy. That old hairpin box will find a new home on your dresser.