Each square of Madrid speaks a different story (Part 1)

Fan of Madrid’s modern, classy appeal? Stroll through its broad boulevards and sprawling spaces for mementoes of a powerful empire. Craving a rougher, edgier side? Slip into the back streets and smaller neighbourhoods, where the real Madrileños live. Gourmet cheese bar to 1800-circa taberna, snazzy olive oil store to dimly lit cobbler shop, quiet corner to busy avenue, Madrid is a city of many moods. The best way to get under its skin? Wander its many squares and streets during a sizzling summer.

It’s never too early for tapas

Choc-a-bloc with cafes, every table laid out under a sunshade below thick green trees. Tapas, beers and coffees, sounds of laughter, loud conversation, and the aroma of happiness. Feel that subtle headiness? Even if it is still mid-morning, the atmosphere in Plaza Santa Ana is too good to resist. Ok, technically tapas isn’t even lunch, so don’t hold back. The waiter greets you with a smiling face and a cheerful ‘hola’, guiding you to an empty table. Fun, friendliness and a warm welcome…you could get comfortable in this city from zero hour. Heard about the complimentary pintxos (skewered appetisers typical of the Basque region)? Now try them out. The pickled manazilla green olives and cornichons (gherkins) are addictive, so slow down the greedy gourmet in you, till the real deal lands up. Pick roasted peppers and grilled shrimp for maiden tapas. Fresh, light, satisfying.

Little snack downed, slip in and out of the village-like byways to discover the true character of the city. Stumble upon a nostalgic poster of a gitana with an embroidered shawl and hair bedecked with red roses adorned the exterior of a traditional tapas bar. Look up at street corners for decorative hand-painted azulejo (nine or twelve white glazed tiles joined together to form a large sign) indicating the name of the ‘Calle’ (street). Track the variety of descriptive pictures…animals like eagles and bulls, important historical figures like mayors, or ordinary people like cobblers, religious characters, nuns, monuments, floral motifs, shrines, rural scenes, even sailing ships. Tiny tales coming alive through each ceramic canvas. Yes, this feels like Spain.

Hike up your curiosity quotient for every commonplace sight. Dip into the intrigue with a vintage collection at a ceramic shop, old panelling at a cerveceria, shoppers debating at the displays of ham, a server polishing the counter at a trendy vino…the list goes on. Get a sense of the enticing urban texture with medieval alleys, tiny taverns, wrought-iron balconies and stately gardens. Know each barrio with its own distinct persona…classy, bustling, trendy…with reflecting influences from each monarchical dynasty, from Flanders to Austria to France. One peel at a time, the city unveils each era, Neo-Classical to Renaissance and Neo-Gothic. Sponge it up.

Trudge on despite the searing June heat of the afternoon. A couple of scoops of coffee helado and you’re on our feet again, weaving through one ‘Calle’ after another. Land up at Plaza Mayor, Madrid’s main square and site of the former town hall. At the end of the Calle de Felipe III, where the buildings cast shadows over the narrow street, an ochre-bricked arched gateway draws you like a moth to a flame. Into a vast space bathed in blazing sunlight. 200,000 square feet a colonnaded quadrangle, enclosed by beautiful arcaded three-story residential structures. Wide pan across the 17th-century square, taking in the curious mix of Habsburg, Bourbon and Georgian architecture.

Grab a seat for a pleasant late lunch. Bocadillos (big sandwiches) because it is too late for montaditos (smaller ones) at one of the sidewalk cafés. Definitely chorizo over salchichas, lomos, serrano and ibérico…slip into local mode with ingredient choices now. Survey the ‘Castilian baroque’ crimson buildings…their ornate balconies and pointed grey spires would have accommodated a third of the town’s population once. People would have enjoyed festivities happening below from these very windows and balconies. Were these still private homes? 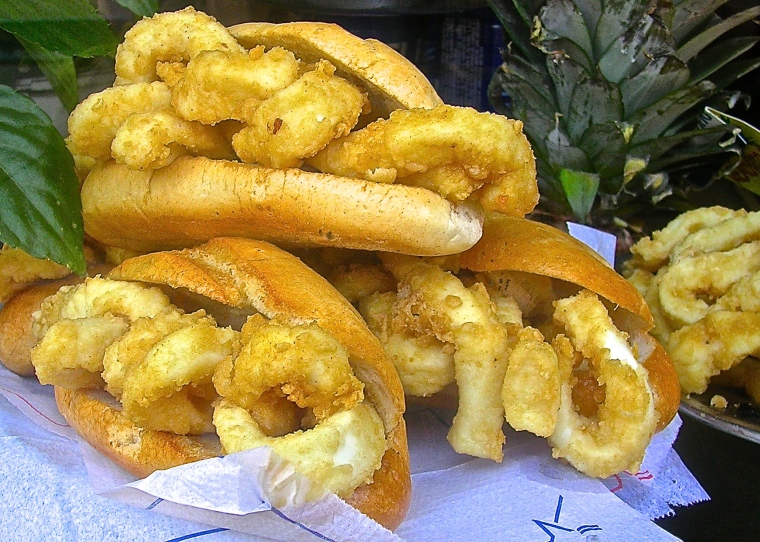 Follow the movement of tourists and selfie-snappers hovering around the regal statue of Felipe III astride his horse. Find comfort in the symmetry of the structure and the harmony of red-white colours. Notice all the colour…men and women flaunting bright turquoise, sharp pink, royal purple, apple green, flaming red, sunny yellow and happy orange. Much less of neutral greys, beiges, blacks and browns that one sees in many other parts of Europe. Dark hair, tanned skin…every lady as gorgeous as Penelope Cruz and every hunk as handsome as Antonio Banderas.

Think how a medieval square is now a stage for Madrid’s cafe culture. Enterprising young hustlers selling tacky toys to school kids. A live headless statue moving around with his head in his hands, mystifying onlookers. An accordion playing softly, couples going insta-live, patrons filling the patios. Serenity in a plaza, which had had more than its share of excitement and gore. Bronze reliefs under lampposts indicating all the Spanish history that had been made here…religious celebrations, merry markets, colourful carnivals, fun fiestas, frenzied football matches, brutal executions, rowdy bullfights and even heretic pyres during the Inquisition. An involuntary shudder running down your spine? Thank the heavens for being born in peaceful times.

Landmarks showcasing the architectural styles of the mid-19th century, including the first and most famous…the pure white Edificio Metropolis, making a statement with its lavish façade. Pillars, statues and ornaments and a statue of the goddess Victoria on a contrasting black and gold dome. Stare away before taking in the other spectacles around like Edificio Grassy and Europe’s first skyscraper, the Telefonica Building. Countless shops, restaurants, bars and theatres. This is a scintillating street that never sleeps. Take a break at Plaza Calleo, for the sake of tired feet begging for an hour of rest. Another cafe, right about now. And tickets for a Broadway-style evening. Lion King? Les Miserables? Flamenco, ballet or a Spanish play? Choices, choices, choices…

7 thoughts on “Which of these Spanish squares is your favourite?”