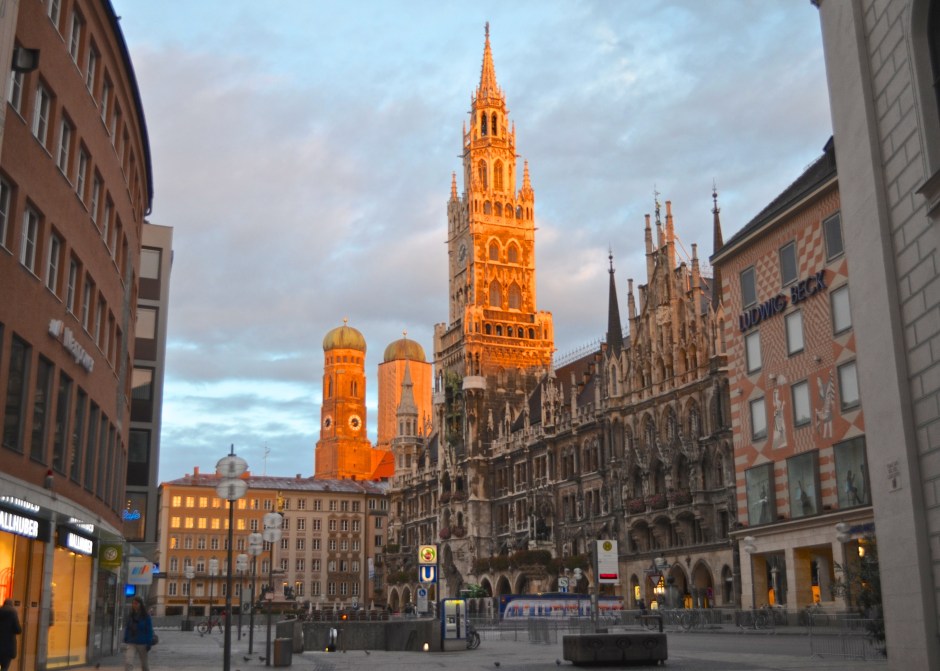 Skipping Bavaria while in Germany should actually be illegal! It is literally a crime…depriving yourself of the splendours you could encounter while travelling south by train to Munich. No exaggeration…that image of Germany will be burnt onto your memory wall forever. Nature flaunts its full glory through endlessly luscious grass-carpeted meadows and forests so thick, they close in upon the train tracks at some points. Tunnel after tunnel zip past, and you zigzag over the landscape crossing one hill after the other. Hypnotised, head turned towards the constant cinemascope, your eyes scan the landscape without a break, thirsty for more. Could the introduction to Germany’s secret capital city be any more enticing?

Pick Cortiina Hotel on Ledererstrasse for its sleek minimalist interiors and central location within a stone’s throw of the old town (Alstadt). Cozy up in front of the hip, electric fireplace before you tackle the grey skies and a possible downpour. Munich is waiting!

Step into the past

Pause under the austere stone tower of the gothic Altes Rathaus (Old Town Hall) and reflect on its third restoration after two major destructions, first from lighting and then from war. Not a stone out of place! Gloat at the sunrise-washed vision of the ancient St Peters Church before you take a few steps through this historic gateway, and you are in Marienplatz, the heart of the medieval walled city of Munich since 1158. Heritage buildings mix harmoniously with modern day architecture. The ancient Marienpillar column adorned by a gold-plated statue of Mary reminds that the small, irregular shaped piazza still continues to be the pulsing centre of the old city. Spend a few hours soaking in the peace…till the outdoor cafes open and buzzing throngs alter the scene. 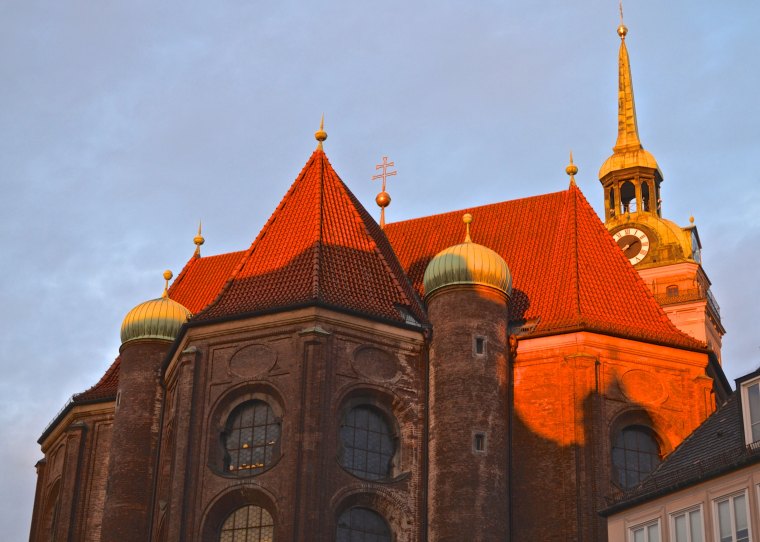 Take time to study the indisputable star of this space…the New Town Hall (Neues Rathaus). Its 300-feet long Gothic-style facade, graced with ornate stone ornamentation, hundreds of statues, turrets, arches and a 260-foot tower rising to the skies, declares it a work of art. The solemn grey exterior is unexpectedly softened by bunches of pink flowers bursting from its balconies. What’s even better? The tower houses Europe’s largest, most famous Glockenspiel, where 32 life-size dukes, ladies and knights, dance around, telling the story of a royal wedding from the 16th century to the tune of 42 chiming bells everyday. The dance of the figurines synchronised with the musical chiming bells makes for a pretty unusual concert, at 11am, 12pm and 5pm. (Read my  post) Everything so painstakingly re-created! Only now, 65 years after the last bombs had fallen, are the restorations finally being wrapped up. That thought alone, is enough to make you stare a few seconds longer. 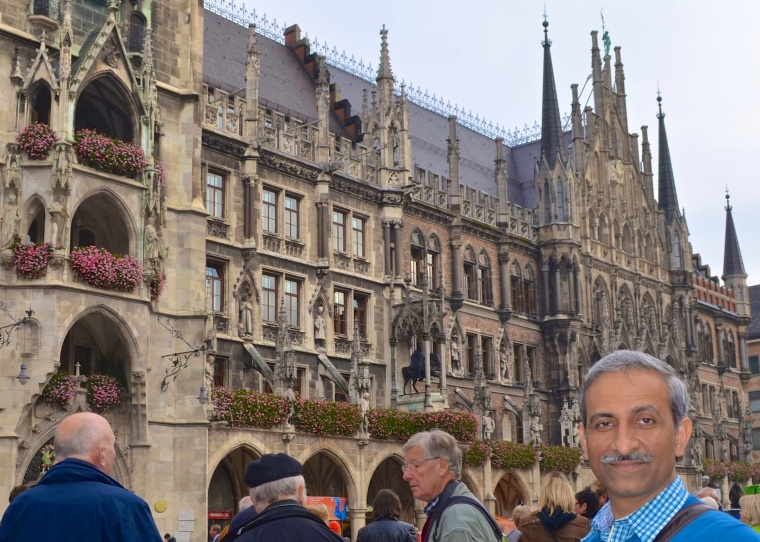 Beyond and above, catch the familiar glimpse of twin green onion domes of the Frauenkirche, the city’s iconic church. The twin domes, said to be inspired by the Dome of the Rock in Jerusalem, are different from their Russian cousins…which are usually gold plated or colored in beautiful designs. Here the domes are simple half-rounds in green copper, each decorated with a small gold globe on top. Apparently, domes represented the Holy Roman Empire and are found on Catholic churches all over Southern Germany. Divergent thinking? Maybe the sensual curves of the domes are a symbolic celebration of life after a series of invasions, fires, plagues and wars?

Classic Gothic style and plain brick simplicity of Frauenkirche’s facade is a contrast to the whitewashed beauty inside. Look for an especially interesting element…the devil’s footprint by the door. Legend has it that the devil stamped his foot in rage when coming into the church to steal souls. Take a seat and reflect on the lovely, delicate decorative lamps suspended from the ceiling. Octagonal pillars create the illusion of white walls on on either side of the 31-metre long nave. Large, yet surprisingly intimate. Most of this was destroyed during World War II, except the towers, and the rest has been gloriously restored. Even today, the stature of the Frauenkirche spires continues to be highest…no building in Munich can be taller!

Shop till you drop

Move east from Marienplatz onto the broad boulevard of Kaufingerstrasse that leads to Karlsplatz, where the medieval city gate Karlstor stands. This is Munich’s busiest shopping area, filled with well-known department stores, international chains as well as smaller shops selling umbrellas, gloves, candles and wood carvings. Criss-crossing the main street run passages, alleyways, arcades and courtyards with exclusive boutiques with exquisite German crafts made of porcelain. Dissolve into some mindful and some mindless retail therapy.

The entire area comes alive at night, the lights adding a new sparkle to the aristocratic buildings, compelling you to linger on like kids unwilling to go home after a day at Disneyland. At Marienplatz, the Neues Rathaus makes for a radiant centrepiece washed in golden glow against the electric blue of the sky above. Timeless.

Eat, drink and be merry

Indulge in a necessary currywurst snack and a much-needed coffee break with gingerbread cookies. Pay homage to Dallmayr, the oldest luxury delicatessen in Munich established in 1700, just behind New Town Hall. Gape over the exquisite Bavarian and international gourmet goodies that attract 1.5 million visitors every year. Prep up your tastebuds with sights of freshly prepared delicatessen dishes, to delectable desserts, fine wines, exquisite chocolate, and even live crayfish swimming in a fountain. And when hunger pangs call, extract yourself from the stupor and start a trek in search of Bavarian food.

Check out nightlife in nearby Platzl, a little square which used to be a small market place back in time. Nowadays its is a place of great contrasts…traditional architecture, a Michelin Star restaurant, souvenir shops, a Hard Rock Café and the historical beer hall, HofBrauhaus, where Hitler gave his first speech to his Nazi Party. Over a hearty Eintopf, a one-pot meal made of vegetables, potatoes or pulses and meat, let your mind wander to the past when Irish Benedict monks founded Munchen at Marienplatz. 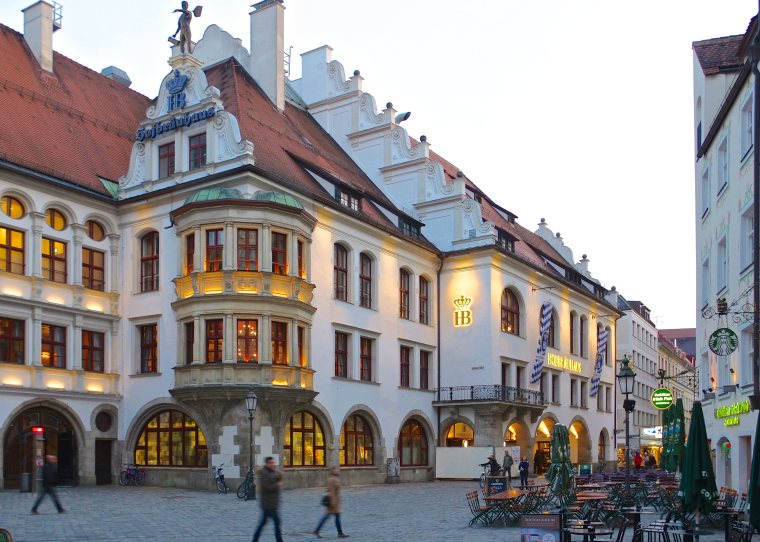 Little did they know that someday, their tradition of brewing beer would grow into the world’s biggest funfair, the 16-day long Oktoberfest. Of course, the credit for the tradition actually goes to King Ludwig I. Had he not invited the citizens to celebrate his wedding to Princess Therese of Saxony-Hildburghausen in October 1810, beer may not have morphed into Germany’s national passion. In fact, here in Bavaria, beer is officially considered to be a food. So, have you eaten yet?