You can live in a Roman Emperor’s palace…

Work-life balance is not a new concept. Even rulers yearned for ‘me-time’. For proof, look no further than Croatia. 1700 years ago Roman emperor Diocletian pre-planned his retirement and invested 10 years in creating a humungous 7-acre villa in Split (the Latin word spalatum means palace). Prime real estate by all standards…warm glow of the Mediterranean sun, Adriatic waves lapping at the backdoor, open terraces and ornate balconies to take in the fresh sea air. It is said that there used to be a three-week quarantine for anyone who entered Split…there was no place for disease or infection in this idyllic abode. Respect!

Diocletian’s ancient walled city, is now a UNESCO-protected World Heritage Site, and an enticing Mediterranean destination. Go live inside the Palace complex and bask in the false pretence of being a royal guest. Just 220 buildings and 3,000 residents now, where 9000 lived in Diocletian’s time…elbow room aplenty. Be privy to the harmony of the limestone buildings, cozy squares, quiet cafes, delightful shops and understated boutique hotels scattered around. Beaming at the prospect of walking those shiny-smooth stone streets, aren’t you? 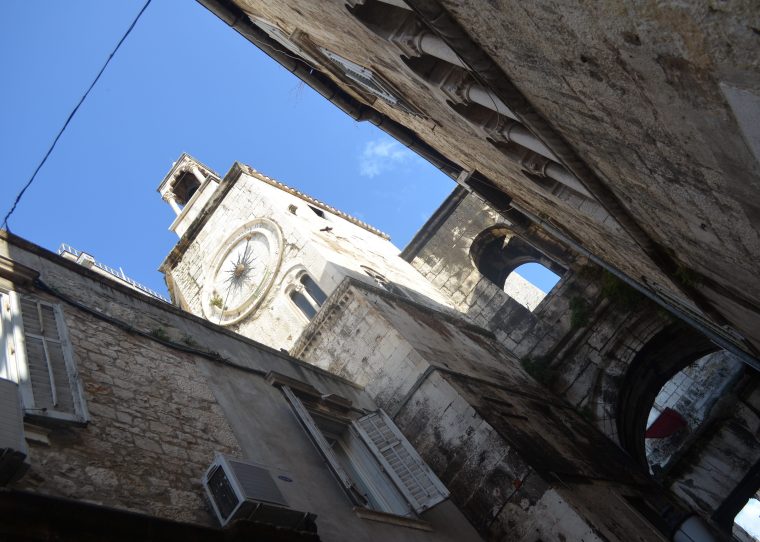 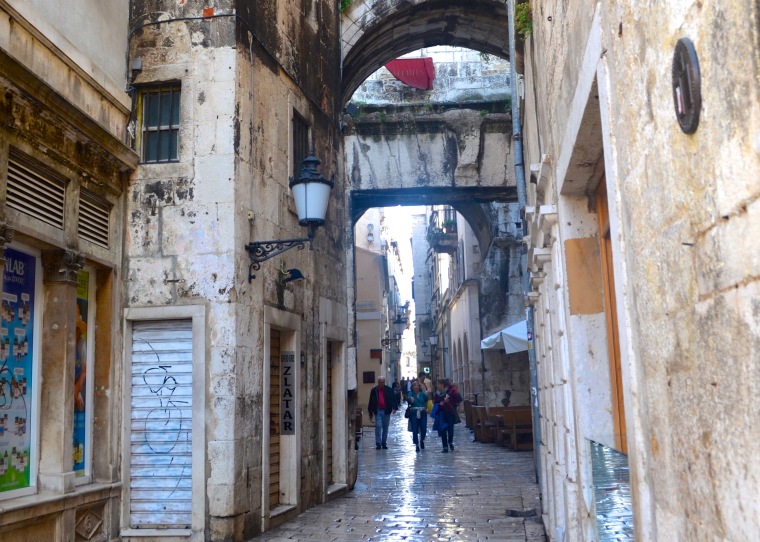 But first, peel your eyes away from Riva, Europe’s most stunning promenade. That white stone-paved, horseshoe-shaped bay lined with neatly arranged palm trees, dotted with seafront cafes under rows of pristine white sunshades, speckled with docked sail boats and framed by the glamorous backdrop of the centuries-old Roman palace walls. Linger in the lovely People’s Square (Narodni Trg), home to the former City Hall. Admire the countless elegant Renaissance, Baroque and Gothic-styled family palaces built by Venetian artisans for aristocratic families. Interpret the symbols of social status (animals, birds and mythological creatures) displayed on the family coat of arms outside the mansions. Squeeze into the world’s smallest church, 6th-century St. Martin’s, built inside a minuscule 5-meters wide guard passage above the Golden Gate. And make a wish by rubbing the shiny big toe of Ivan Mestrovic’s imposing statue of 10th-century Croatian bishop Gregory Nin. 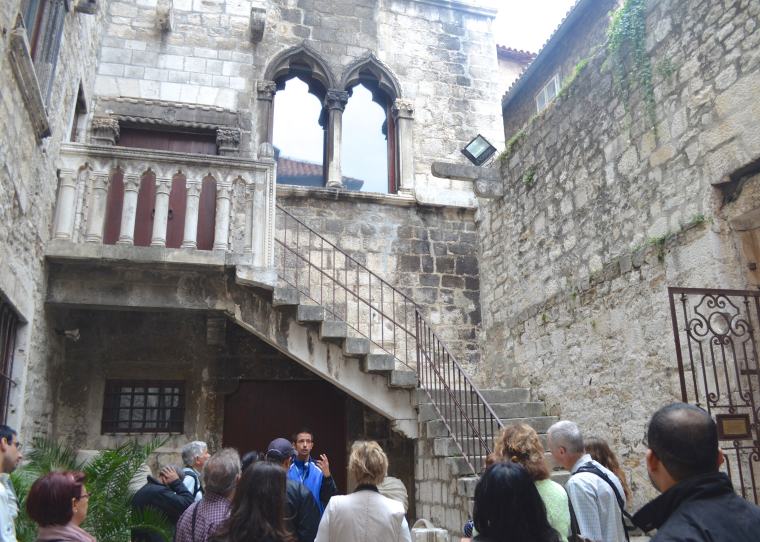 Then head to the epicentre, Peristil, a large imperial square, constantly humming and buzzing with people. Hogging the limelight is the grand St.Domnius cathedral with a bell tower. To its left, touching it like a massive annexe, is an octagonal structure, Diocletian’s mausoleum…its eight sides symbolising eternity. The structure has been almost completely preserved, except for the domed ceiling, which has lost its glittering mosaics. So, the Emperor does live on! Wait, a wedding has just taken place and outside the cathedral, guests are singing celebratory songs in abandon, showering flowers on the blushing bride and the groom and lighting signal flares. Cheer along! 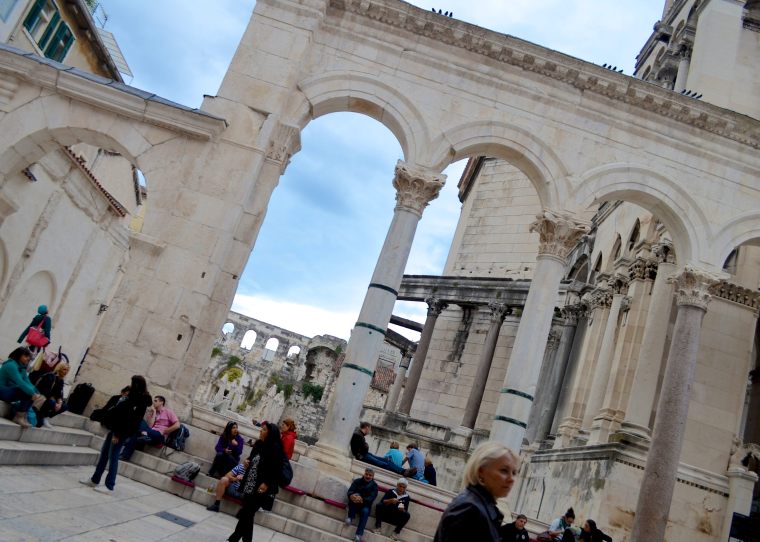 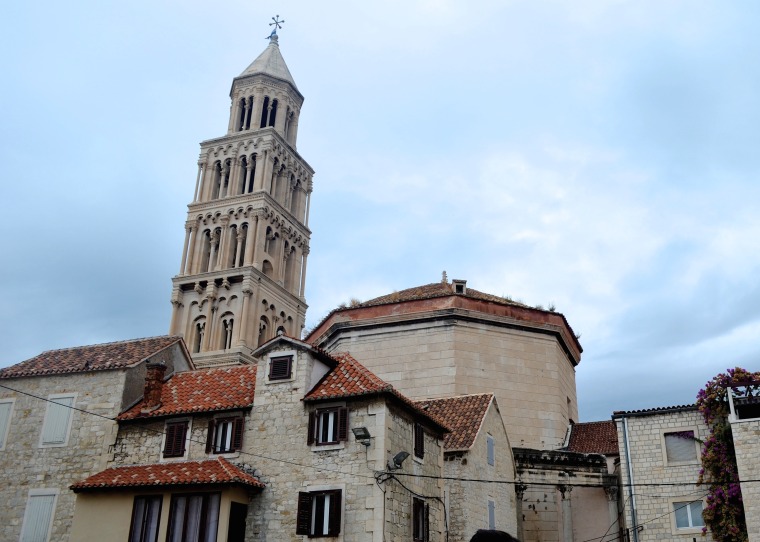 The 27-meter long and 13.5-meter wide Peristil is framed by two colonnades, lined with six huge red granite Corinthian columns. Diocletian’s loot from Egypt. Three on either side are reddish-purple, while the rest are white…these colours once marked the boundaries between commoners and royalty. Purple was the rarest of colors, prepared by boiling thousands of marine snails in giant lead vats for days. Anyone besides the imperial family caught in purple attire could be beheaded in those days. So, if you cannot lie without violets and lavenders in your wardrobe, be thankful that you weren’t born in Diocletian’s era. 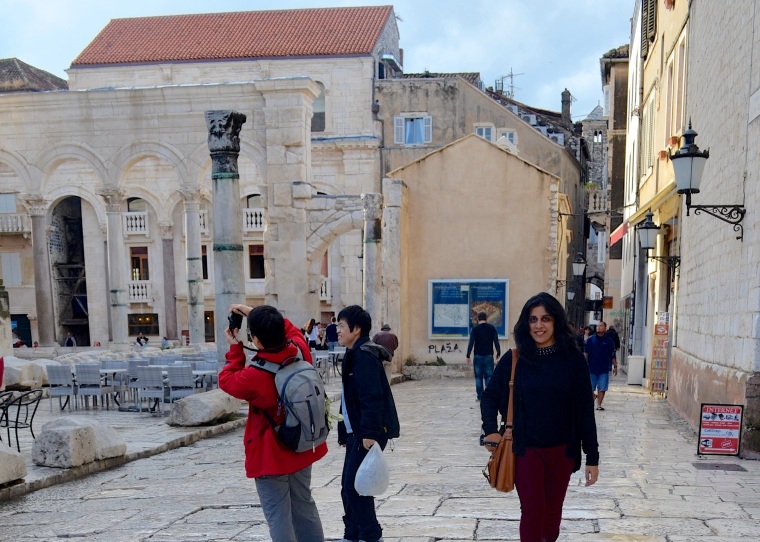 Diocletian brought back 13 black Egyptian sphinxes from the Pharaoh Thutmose III’s tomb to Split, but only three remain. One old black Egyptian sphinx stands guard at the gateway of the cathedral. The second headless one is outside the Temple of Jupiter opposite his mausoleum, down the narrowest lane in the world. Both are there’re 3500-years old! 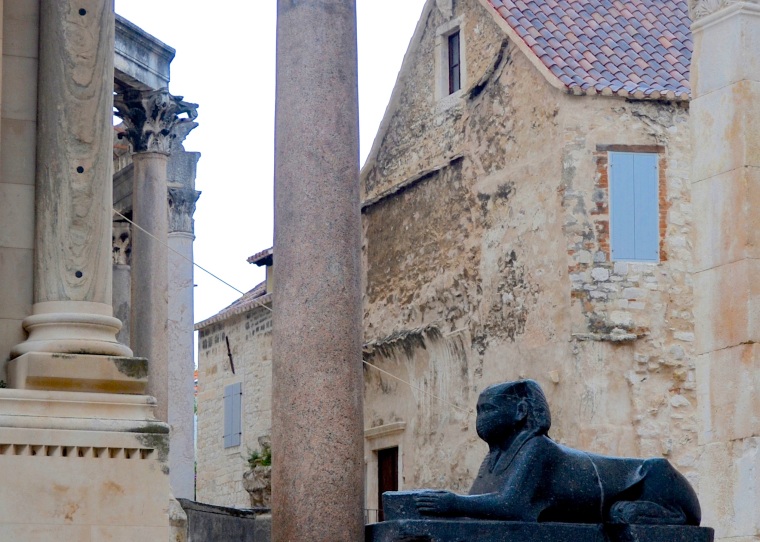 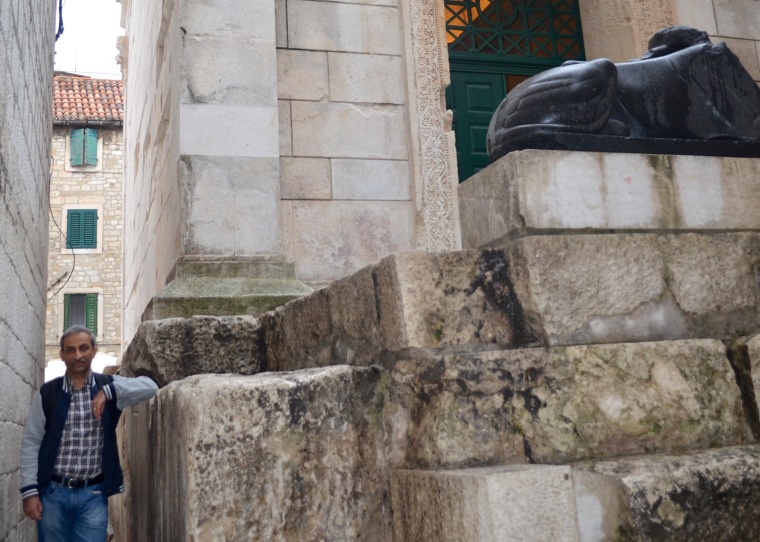 At the head of Peristil, to the south, tread a flight of wide steps, leading to a large circular stone-tiled space, the Vestibule. Inspired by the Pentagon in Rome, maybe? Pan from massive pool of sunlight on the irregular mosaic patterned floor to the ceiling to the perfectly circular gaping hole, providing clear views to the brilliant blue sky above. There would have been a huge cupola here, covered in mosaic and marble. The Roman emperor, a self-proclaimed Sun God would enter the Vestibule from his imperial quarters daily around 12 noon, and greet the cheering crowds eagerly waiting at the Peristil. This ritual is enacted even today, during summer months by actors. A young boy testing out Vestibule’s acoustic design by calling his ‘mommy’, is hustled away just in time for the live vocal performance by a group of five singers in black suits, white shirts and red cummerbunds. For the next 10 minutes, lose yourself in the chorus of the traditional Dalmatian songs echoing in the circular auditorium. 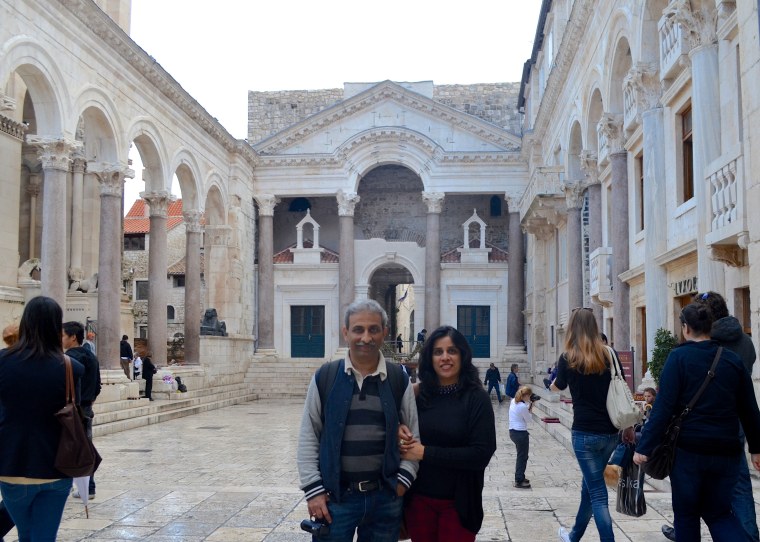 Opposite the cathedral, at the classy Luxor café, earlier part of the Cipci Palace, gaze at the glorious remnants of the imperial palace on its walls and floor. A marble circle on the floor indicates the spot where the base of the Temple of Venus had been. Exposed walls and the ceiling murals reveal unadulterated history. Outside the cafe, squat on the red cushions scattered on the steps of the Peristil, order coffee and cake and roll back into the 4th century. If you were guests of the Roman emperors during one of his royal feasts, and this was his dining room, you would probably be sampling 25 or more exotic dishes reclining languorously on your right side, using your left hands to gobble down the food. Close enough! 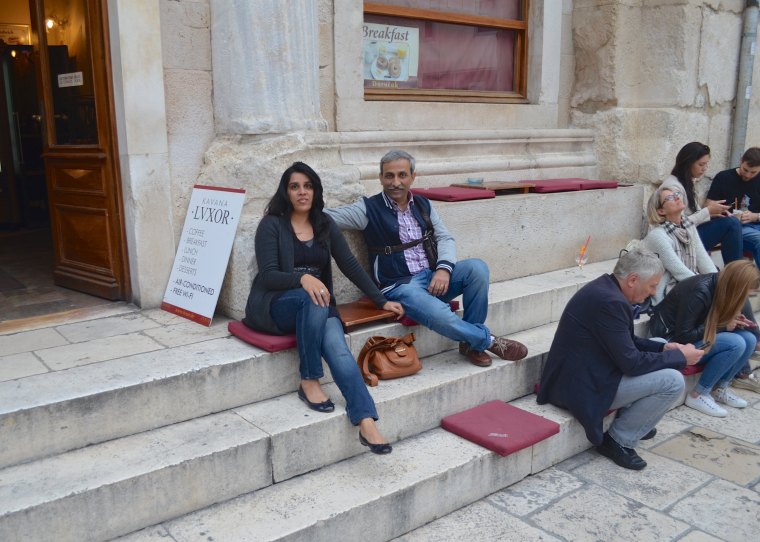 Venture into the Cathedral, to gape at its intricately domed interior and check out the 57-meter belfry towering high above the palace for gorgeous views. A sea of roofs…all red-tiled, some newer and brighter red, others older, brown and discoloured, some curved and bent with the weight of time. Crumbly houses cluttered so close together, randomly hung electricity cables, TV aerials, dish antennas and solar heaters fighting for space. Poor Diocletian would be turning in his grave…or what’s left of it! 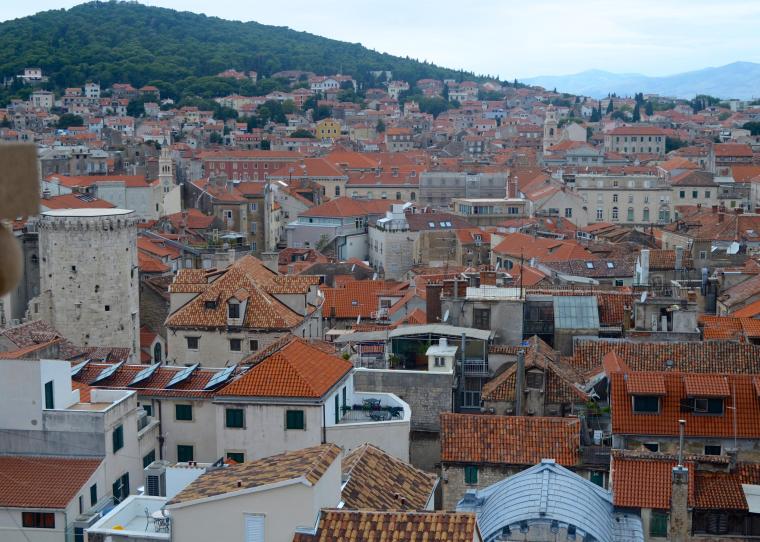 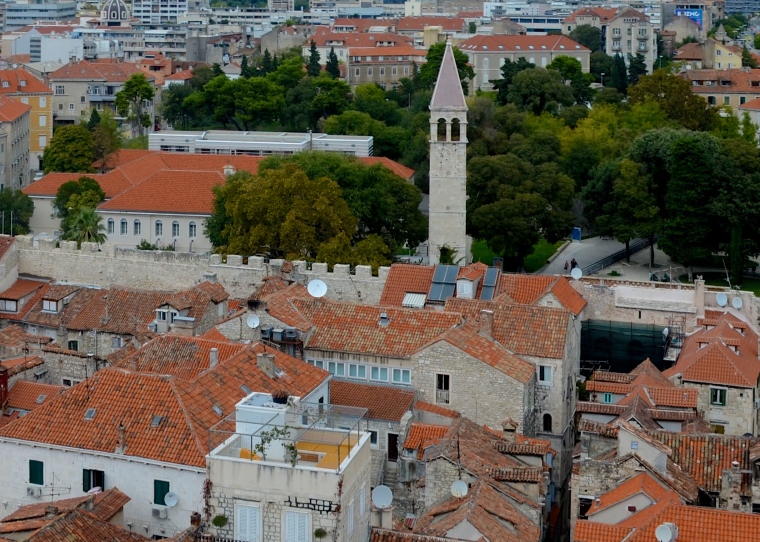 For a fee of 10 kunas, explore the underground cellars which mirror the layout above…since most of the palace was in ruins, how can you let that go? Diocletian had built the basements to raise the level of the entire palace complex, so that he could enjoy the sea view better. Heights of extravaganza! The huge labyrinthine halls were once used to store foodstuffs, make wine and press olives. It is a strange feeling to know that once the sea used to reach the very walls of the palace, and boats berthed in front of the gate to drop off supplies or receive noble guests. 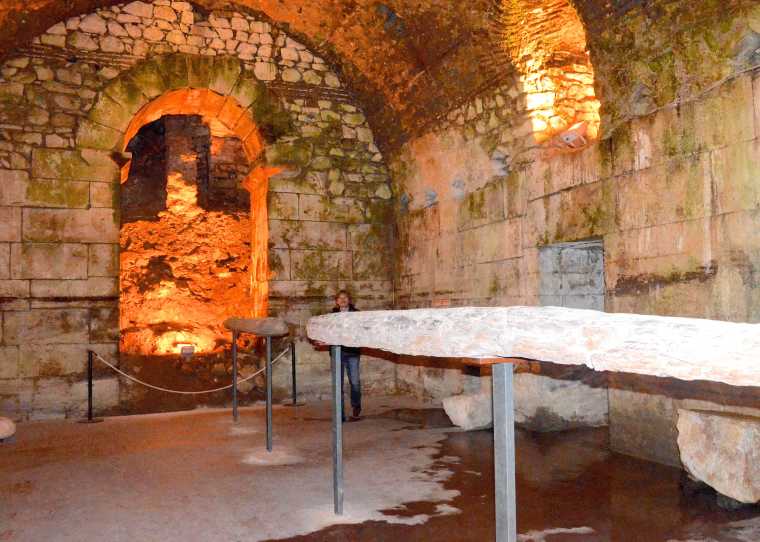 When night falls, rain drops go pitter-patter over wooden benches and red canopies of the case in alley ways. Waiters hang around, waiting for diners, chatting. Cheerful sounds of laughter echo from a far end of a quiet alley. What is it like having a home in a neighbourhood strewn with ancient Roman leftovers? Knowing that the doorway to your house has a marble pedestal which is the top slice of a marble column from the 4th century? Is it possible to ever have an uneventful day living within a palace? Where laundry dries on makeshift clothes lines across the narrow lanes, grannies watch the action in the squares from the shuttered windows of their cream stone houses. Where motifs in Greek and Roman art decorate the doors, bistros show-off ancient exposed brickwork on their walls, ordinary homes are adorned with ornate balconies, carved doorways and graceful venetian windows. Where centuries old graffiti is inscribed on nondescript walls, laced borders carved into limestone provide unexpected relief, and water trickles out of a lion head fountain where they pick their daily bread. 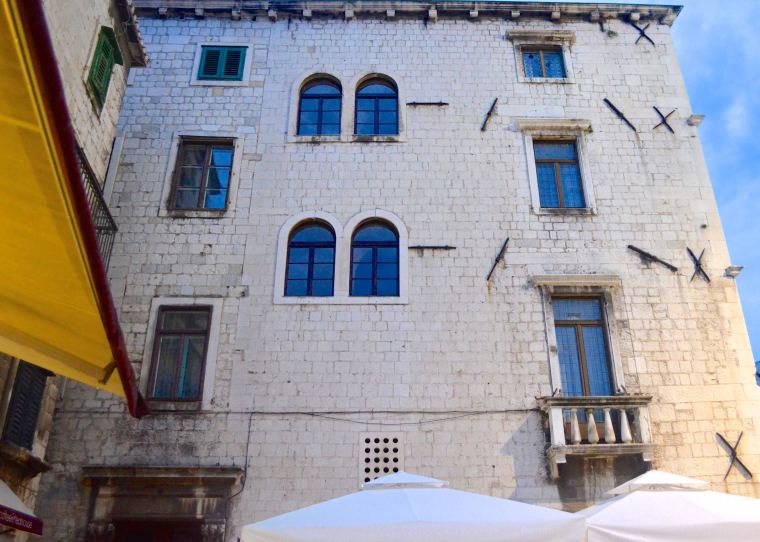 So when you tread the streets late that night, chances are you may hallucinate. Is that a bunch of solemn-faced toga-clad Romans stationed at the columns beneath the balcony where Diocletian and his queen sometimes surveyed the inky-dark Adriatic waters? After all, the Emperor is resting.

118 thoughts on “Why is Split the most enticing Mediterranean destination?”