Riva in Split is my all-time favourite…

If you’ve taken the bus from Zagreb to Split, you will literally descend upon the city from high above the curving mountainous road basking in the birds eye view. Habitat springs up as if out of nowhere. An average looking semi-modern city, no spectacle so far. But hold on. You haven’t reached old Split yet. Nearer the shore, older mansions and stone buildings take over…and then, like a curtain rising to reveal the stage, the road gives way to a vast vision of the the sparkling blue Adriatic waters, hugging a busy port filled with dozens of Jadrolinija cruise ships and boats. Buses moving in and out, cars inching along, travellers alighting from and board all forms of land and sea transport…widespread, yet organised chaos! Don’t get disheartened just yet.

Leaving behind the sounds of the humming engines and the buzz of people, start moving towards the direction of the old town. One sharp turn and you’re in different world…stunning, serene, sophisticated. Stretching before you is one of Europe’s finest promenades…. a delightful expanse of a white stone-paved, horseshoe-shaped bay. Stop. And stare. At the line of neatly arranged palm trees. The seafront cafes under rows of pristine white sunshades. Lounger-styled benches dotting the waterfront. Docked sail boats specking the harbour. Waves creating an unstopping splashing symphony. And the backdrop. Centuries-old, high limestone walls of Diocletian’s Palace lining the front of the promenade, lending an unreal glamour, taking it miles ahead of Nice’s never-ending Riviera promenade.

Behind those walls sprawls the 7-acre retirement villa that Roman emperor Diocletian had built 1700 years ago. Even an Emperor needs a break from Emperor-dom! You may be overcome with a strange sense of pride, as you enter one of those medieval gates and thread your way along the narrow stone-paved streets of this ancient walled city, now a UNESCO-protected World Heritage Site. Privileged to be privy to the harmony of it all…the limestone buildings, the cozy squares, the quiet cafes, the delightful shops and the understated boutique hotels. Just 220 buildings and 3,000 residents now, where 9000 lived here in Diocletian’s time…elbow room aplenty! Love at first sight?

Drop your luggage into your hotel, and no matter how alluring it is, come right back to the Riva to soak its inimitable atmosphere. Even when its drizzling, the charm of this palatial promenade is undeniable. Greys of the cloud-covered skies merge with the greys of the uneasy waves. The open-air cafes are empty, their canopies down, and the plastic furniture glistening with the just-fallen raindrops. Shops along the promenade are empty, others closed for business till the weather improves. 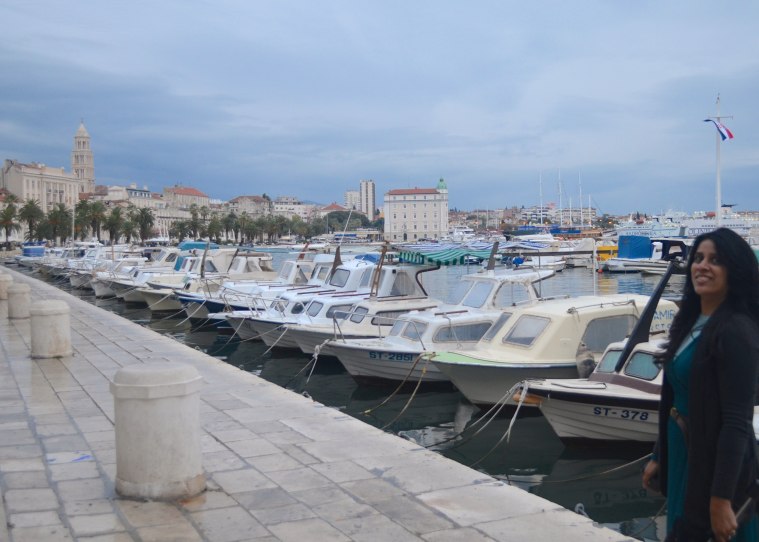 Seek refuge from the downpour in the St Francis church and monastery at the far end fountain roundabout, near the quaint old stone houses. Study the interiors, the modest wall paintings and the inner courtyards. This is mere rain…but where would citizens have sought refuge when invaders had reached their doorsteps centuries ago.

When the rain abates, step back outside to be part of the routine. A man sweeping excess water off a docked boat with a broom…he just loves his boat…no one would be sailing in these choppy seas anytime soon today. Approach the huge anchor poised upright like a sculpture close by…its possibly a maritime symbol for the busy port. Grip the smooth iron with your fist tightly…just how old is it?

Study the concrete floor elements on the Riva promenade…they are arranged so that the subtle shades of white to pale grey merge to appear into a pixel image of a rippling sea from a distance. Each 1.5 x 1.5m square tile is equal to one full stride of two steps in Ancient Rome called paces. Stride along, try to match your paces with the tile sizes. My paces were far smaller, but then I am no Roman! 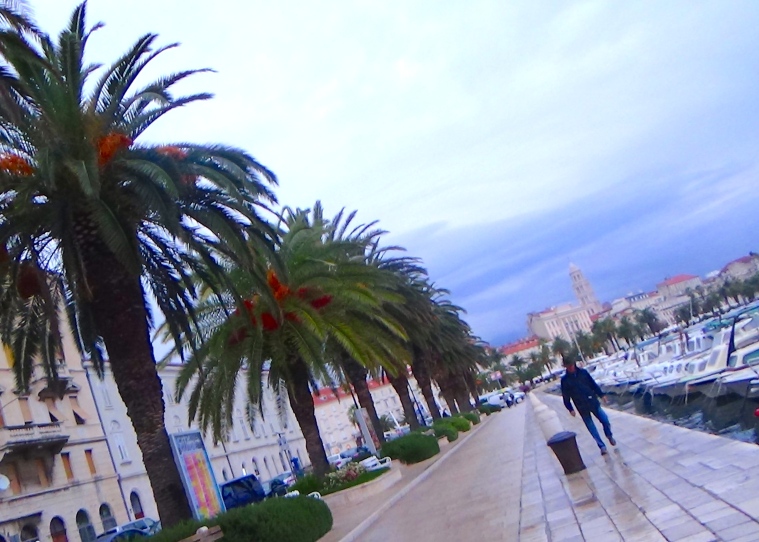 When the clouds depart, the skies open up and so does the Riva. At the far end, explore the Trg Republike (Republic Square), a large open square surrounded on three sides by an elaborate red neo-Renaissance structure known as Prokurative, which gives the area its local name. The bright red L-shaped building and its tall arches contrast wonderfully with the pale floor…the redness appearing redder…a small-scale, very evident reminder of the St Mark’s square in Venice. Cafe tables are strewn all over and children are riding tricycles, as their parents catch up with friends over a kava or a beer. Notice that coffee in Split is not about big mugs or Italian-style espresso shots. The ritual is about socializing, small talk, or just hanging around and enjoying with a short and long espresso, cappuccino, macchiattos with warm or cold milk whipped cream or ‘bijela kava’ (cafe latte).

Embark on an hour-long trek up Marjan Hill, taking a flight of stairs up from the Varoš neighbourhood, until you reach the Vidilica Café at the summit of the stairs. Get rewarded with a panoramic view of Split…a thick green, pine forest, completely surrounded by the city, the sea, the surrounding islands, and the nearby mountains of Mosor and Kozjak. A green haven for the citizens ever since the 3rd century, these are the“Lungs of Split”, soaring at 178 m. Along the way, several nature trails, vista points, solariums, cave hermitages enchant. Stop at the modest little Romanesque church of St Nicholas, enjoying the vistas…a solitary sail boat gliding along the silver sea, dark clouds deepening the colours of the water to a steel grey like oxidised silver, and the croaking of seagulls for musical tempo. 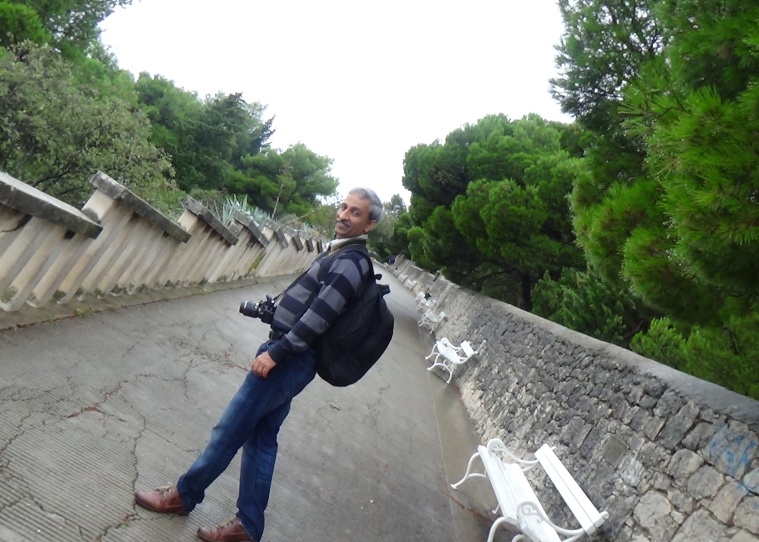 Wander around the nearby Veli Varoš neighbourood, located above Trumbićeva Obala Street, on the southern slopes of Marjan…its many winding roads filled to the brim with traditional Dalmatian rural-like stone houses and scattered churches. Originally home to fishermen and farmers who came to Split to make a living and to seek shelter from the Ottoman invasion, today it is the base for many boutique luxury apartments. Real estate booms here! 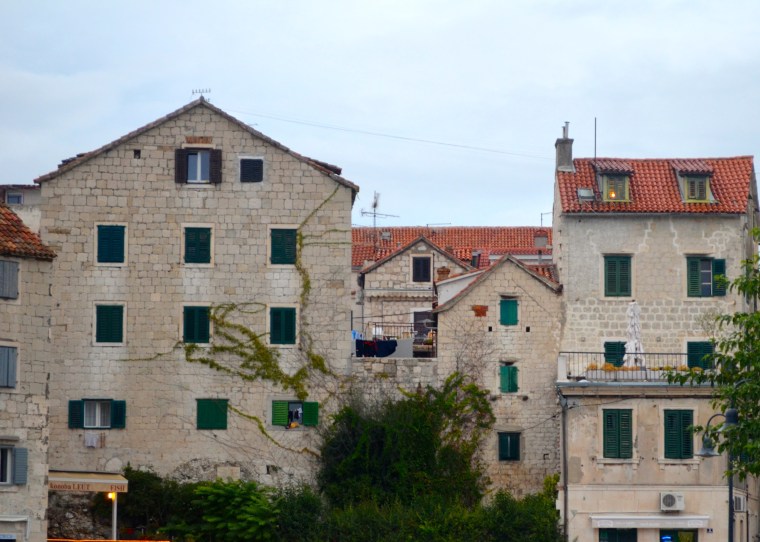 Go further upto the new western marina to gawp at yachts and sailing boats, get fascinated by the musical clanging of sails from the dozens of boats parked in the bay. The walk of fame proudly shows off 73 plaques with names of Split athletes who have won Olympic medals since 1952. Survey the breathtaking view of the harbor, and close your eyes for a minute, visualising a large wooden vessel gliding full mast towards you, merchants from exotic lands in search of trade opportunities. Oh wait, that was just a luxury liner full of Britishers in khaki shorts, sun hats, sunglasses and digital cameras. 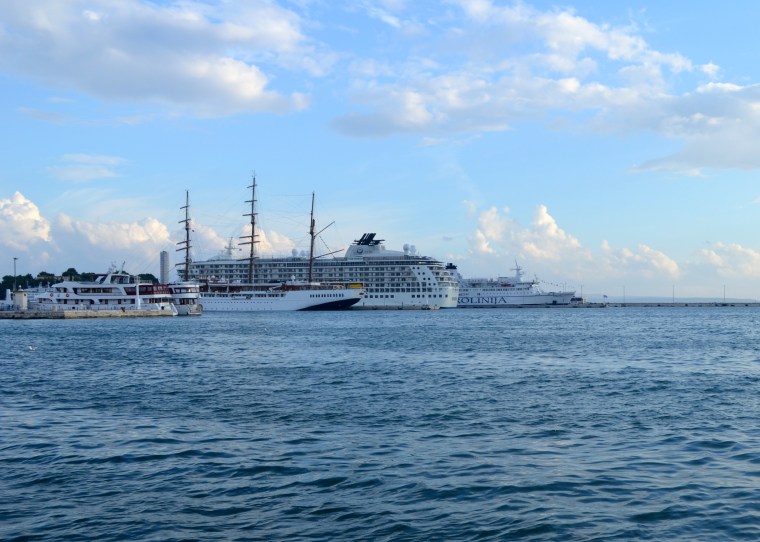 Riva dazzles in the evening…drown in the atmosphere. Savour sweet crepes, gaze at the sunset and get misty-eyed with the myriad colors of the Adriatic sea, turquoise blue to silvery grey and inky navy. The waves are restless, incessant. Cafe canopies flap crazily. People stroll around, having drinks or coffees, walking dogs, playing with kids, catching up with friends, savouring the salty sea breeze. Children feed pigeons. Seagulls glide, boats float. The sunset throws out its golden rays from behind the scattered clouds. Gulls croak. Kids squeal. 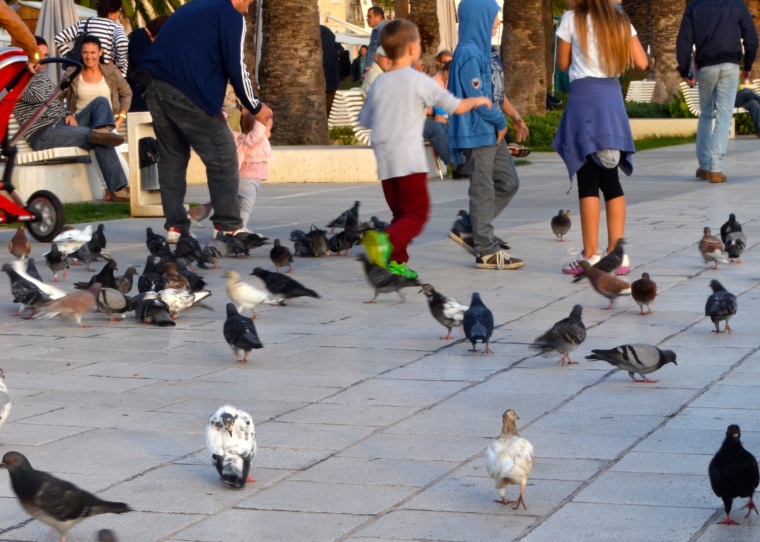 Sit on the endlessly long parapet, legs dangling over the edge, watching the sunset, and the changing colours of the sea. Ponder over the history surrounding you. The name Split comes from the Latin word spalatum, which means palatium or palace…how original! After the slow decline of the Western Roman Empire, Spalatum passed into the clutches of the Byzantine empire, after which it was ruled by the Venetians for 377 years till 1797. The palace-fortress was converted into a town by refugees and slowly, the city spread out over the surrounding landscape. Then Napoleon came on the scene, after which the town integrated with the Austro-Hungarian province of Dalmatia till World War I. The Yugoslavia and Eastern Bloc connection continued, until Croatia finally declared its independence in 1991. Try absorbing this curious mix of influences that has shaped Split’s identity. 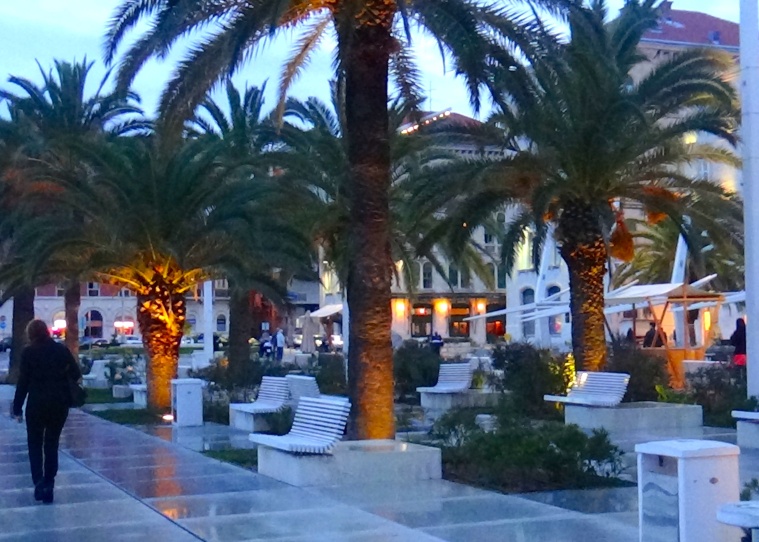 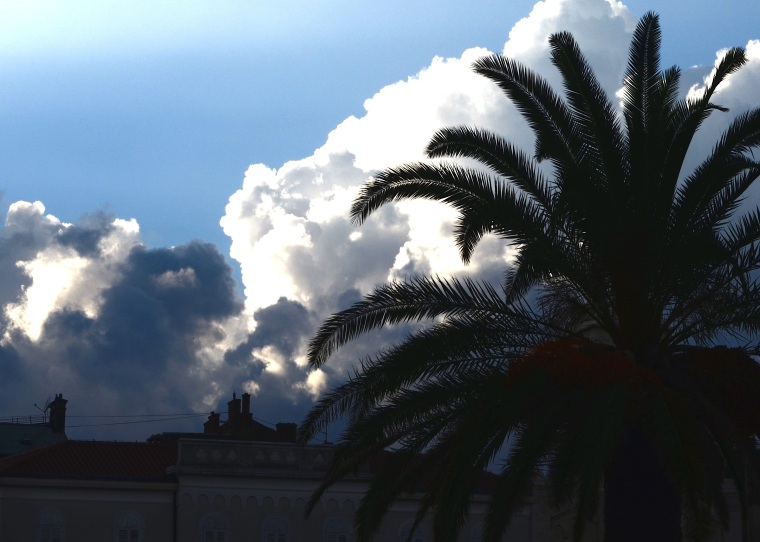 In the distance, listen to the dull humming of the cruise ships engines, docked for the night, passengers offloaded to experience Split up, close and personal. Hundreds of twinkling lights from the luxury liners create shimmering paths on the surface of the gently rippling waves below, the cool breeze above, and the secretive shadows from the Diocletian’s Palace walls behind. A day to remember!

113 thoughts on “Which is the most charming promenade in Europe?”